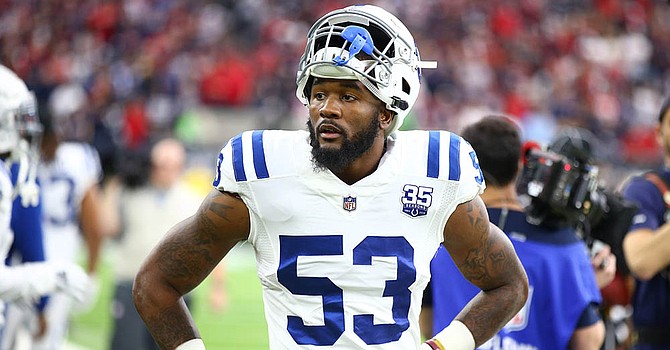 The Colts No. 1-ranked defense will be without star linebacker Darius Leonard, who was ruled out with a groin injury. (Dynasty League Football)

Yes, pummeling the Dallas Cowboys in their billion-dollar Jerry’s World theme park was satisfying for the Browns and their fans. But the fact is, this game is much more important. The Colts most likely will be competing for one of the seven AFC playoff spots. If they and the Browns are in contention for one of the three AFC wild-card berths, head-to-head competition is the first tie-breaker. It’s never too early to think playoff tie-breakers. Thus, any AFC game is more important to the Browns than any NFC game. Especially when that AFC team could be in the 10-6 or 9-7 logjam at the end. So, aside from going 4-1 for the first time since 1994, beating the Colts would pay dividends for the Browns come tie-breaker time.

Second down: Crisis at linebacker.

The Colts’ No. 1-ranked defense – and fourth against the run -- had a tough practice week. All three starting linebackers were on the injury list all week. On Friday, the team ruled out weakside linebacker Darius Leonard, their leading tackler, with a groin injury. Middle linebacker Anthony Walker (ankle) did not practice Thursday and was limited Friday and listed as questionable. And strongside linebacker Bobby Okereke practiced the last two days “donning a large club-like cast on his left hand” – according to the Colts’ amazingly transparent media notes – after having thumb surgery on Monday. “I do not think their scheme will change one bit, whether they have those guys or not,” said Kevin Stefanski. “They run a very, very sound scheme. They let their guys run. I do not think it is going to change what they do. They just go plug-and-play the next guy, and I promise you, he will be playing like his hair is on fire.” Leonard’s place could be filled by veteran E.J. Speed, who practiced through an elbow injury, or rookie Jordan Glasgow.

Myles Garrett co-leads the NFL with five sacks and has registered a strip-sack in three consecutive games. The chance of extending that streak was improved when Colts left tackle Anthony Castonzo was ruled out with a rib injury. He will be replaced by Le’Raven Clark, a five-year veteran who has not made an NFL start since 2018. Garrett has inflicted most of his damage this year lined up over the right tackle. But he can be moved to generate the most havoc and likely will take advantage of Castonzo’s absence. “Usually, I will get the call that I am supposed to go somewhere else, but some of the time, I get to pick and choose who I get to attack,” Garrett said. Now, it's not easy getting to Colts quarterback Philip Rivers. He's been sacked just three times in 124 pass dropbacks because he gets the ball out quickly on short dink throws.

The Colts special teams, coordinated by former Browns special teams core player Bubba Ventrone, have made a difference in the team’s 3-1 start. Two punts inside the 5-yard line by Rigoberto Sanchez have resulted in Colts safeties. Also, they deflected a punt which set up good field position for a touchdown drive in their win in Chicago. Further, Rodrigo Blankenship, with 45 points on 12 of 14 field goals and 9 of 9 PATs, is off to the fourth-best start of any rookie place-kicker in the history of the NFL. The Browns, meanwhile, seem to have steadied their ship after a rocky start on special teams. It appears the Browns will stick with rookie Donovan Peoples-Jones as the primary returner.