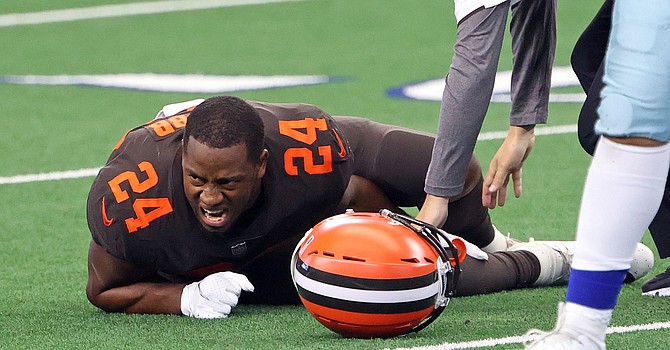 Takeaways the day after the Browns beat the Dallas Cowboys, 49-38 …

The unspoken goal of the Browns’ offensive line this year was to lead-block Nick Chubb to the NFL rushing title that he fell just short of last season.

Now it’s not going to happen.

Chubb was placed on injured reserve on Monday after an MRI revealed a sprained MCL in his right knee. The injury occurred when Dallas defensive tackle Trysten Hill fell on Chubb’s right leg while engaged with Browns guard Wyatt Teller late in the first quarter.

Coach Kevin Stefanski termed it a “several-week injury,” but quickly added he expected Chubb to return this season.

“I know that is hard to see your teammate go down like that, but knowing Nick, he will work his butt off to get back,” Stefanski said.

The Browns spread the word to national reporters that Chubb could be back in six weeks, a timetable Stefanski would not confirm.

If Chubb is back in six weeks, he would miss five games because the Browns have their bye week in Week 9. He could be back for the Browns’ 10th game Nov. 22 against the Eagles.

Chubb had 43 yards on 6 carries before the injury. Prior to Monday night’s games, Chubb ranked second in the NFL with 335 rushing yards and second among running backs with a 5.9-yard average per carry.

Without Chubb, the Browns amassed 307 rushing yards – the most ever yielded in a game by the Cowboys. It pushed the Browns to the top of the league rankings in rushing with 818 yards through four games and a 5.9 average.

While Chubb won’t win the individual NFL rushing crown, it’s still very possible the Browns can run away with the team rushing title.

The Browns also got 73 yards on two reverse runs from receiver Odell Beckham Jr., including a 50-yard touchdown run that swatted the Cowboys’ comeback attempt.

“Nick is tough to replace, obviously, but we have to just make sure we put a gameplan together … with the coaches and then find a way to move the rock any which way we can,” Stefanski said. “I trust that we will put that plan together and I trust that guys will step up when they are called upon.”

After Johnson’s coming-out party against the Cowboys, Hunt called him Slow Grind because of his slow, hard-working approach to his job.

It turns out that Johnson, who came to the Browns last year after some success in the now-defunct Alliance of American Football, branded “Slow Grind” years ago. He actually sells Slow Grind T-shirts and hats on the Website slowgrindapparel.com.

“Slow Grind came from me, it is my brand,” Johnson said. “Just coming out of high school, I always had to get it the hard way. I always had to earn everything I did. I had to stay patient no matter what. Something could be right in front of me, and I had to just wait to go get it.

“Slow Grind stands for staying focused on the ultimate goal. Sometimes the process does not come fast. It takes time. Right now, I am really in a slow grind process because what happened and I got my opportunity, and I am just trying to make the best of it. I have worked hard for it. It has been a long journey. I have just been trying to make sure I seize every moment of it.”

Johnson’s story includes a one-month stint fishing for mahi mahi off Key West, FL, after a rookie minicamp with the Saints in 2018 did not result in an NFL contract.

Johnson, who played at University of South Florida, eventually found football work with the Orlando Apollos of the AAF. That experience earned him an invite to the Browns’ training camp in 2019.

Johnson made the team and played in 16 games last year, mostly on special teams, and earned a return engagement in 2020 under Stefanski.

“I think I have improved a lot,” he said. “This offseason, I worked a lot on my speed and a lot of little stuff like my balance and my football back down in Florida, where I was training. I worked on little things like thatI feel like I am a better player than I was last year.”

Stefanski said, “He does a nice job. From the moment I got here and watching how he prepares and how he goes about his business, he grinds on this thing.”

Stefanski said that defensive tackle Larry Ogunjobi’s oblique injury will be evaluated through the week. Receiver KhaDarel Hodge, who suffered a hamstring injury in pre-game warm-ups prior to the Cowboys game, will be “week to week,” Stefanski said …

Chubb’s place on the active roster could be taken by tight end David Njoku, who may come off IR after suffering a knee injury in Game 1 in Baltimore. “I think we will, yes,” Stefanski said about the re-activating Njoku …

Rookie Donovan Peoples-Jones replaced injured JoJo Natson as the lead returner, and appears to have held onto the job despite a mental lapse on letting a short Dallas kickoff bounce perilously in the end zone. “He needs to make sure makes great decisions there,” Stefanski said. “He did a nice job [Sunday] for us and he is going to continue to do a nice job for us, but that is one that I would like to make sure is going in the end zone for him to be like that.” ...

How unusual was the 49-38 score in the Browns’ win over the Cowboys? According to data on profootballreference.com, there was only one other such score in 16,603 NFL games all time. In 2004, the Chiefs beat the Titans, 49-38.