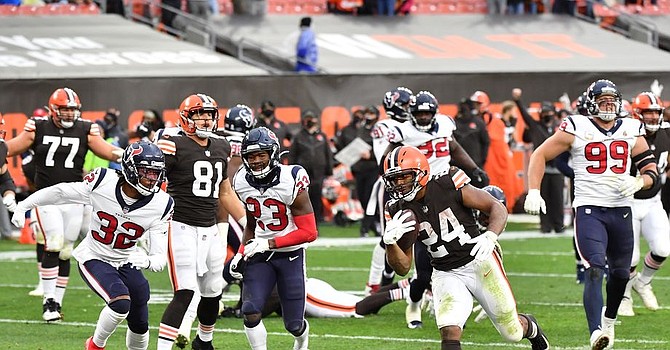 Nick Chubb shined in his return from injury with one touchdown on 126 yards rushing in Browns' 10-7 victory. (Jamie Sabau/Getty Images)

The weather inside FirstEnergy Stadium was insanely ideal for a Browns team built on tough running and lectured all year by coach Kevin Stefanski to “embrace the suck.”

The Browns and Houston Texans stood for a video presentation of the National Anthem under a raging storm and then were chased to evacuate the field for 25 minutes by 60 mph winds.

The rain subsided but the gusts did not. And in the end, the Browns blew out the Texans, 10-7, with their own thunder and lightning – a pair of 100-yard rushing performances by Nick Chubb and Kareem Hunt.

The final score infuriated the bettors who laid money on the Browns giving 3 ½ points. There’s a lesson in that.

But Chubb’s selflessness was lauded by everybody after the running back, in his first game back from a five-week layoff from a knee injury, stepped out of bounds at the Houston 1 rather than complete a 60-yard touchdown run with 56 seconds left and the Texans out of timeouts.

Stefanski had instructed everybody to not score, which didn’t seem such a tough ask when the Browns returned from Houston’s final timeout facing third-and-3 from their own 40-yard line.

Chubb turned the left corner with the ball, tiptoed to stay barely in bounds, and turned on the jets, proving his knee injury is fully healed.

He could have just slid himself down, but his natural instinct told him to keep going.

“Luckily, the run was a little bit longer because I didn’t think about it until the last 10 yards,” he said. “I think that reminded me, running all the way down there.

“Something came in my head and said let’s go out of bounds. I should have just taken a knee or slid to keep the clock running, but it was a split [second] decision.”

Defensive tackle Sheldon Richardson observed, “I definitely would have scored. Put us up two possessions. Pad those stats. But kudos to him.”

The extra yards put an exclamation point on the return of the Browns’ one-two running punch, reunited for the first time since Chubb’s knee injury on Oct. 4.

Surprisingly contained by the Texans’ 32nd-ranked run defense for 80 yards combined through three quarters, Chubb and Hunt steamrolled for 148 yards rushing in the fourth quarter to energize a brave, announced crowd held down to 10,613 because of state pandemic restrictions.

The fourth-quarter outburst enabled Chubb (126 yards, one touchdown, 19 attempts) and Hunt (104 yards, 19 attempts) to post season highs and become the first pair of Cleveland backs to rush for 100 yards in the same game since Leroy Kelly and Ernie Green in 1966.

Chubb fueled the only touchdown drive of the day with runs of 11, 11, 4 and then 9 yards for the score with 13:32 left in the fourth quarter.

“It has been a while,” Chubb said of his layoff. “I have not ran the ball in a while. I played the game so I think I got in shape on that [touchdown] drive alone. I think it paid off.”

Stefanski expertly used Chubb and Hunt throughout the game to wear down the Texans. And Baker Mayfield played his part by not turning over the ball (12 of 20 for 132 yards) on the windiest day perhaps in the history of FirstEnergy Stadium. Officially, wind speeds ranged from 25 to over 60.

The Browns learned from their 16-6 loss to the Las Vegas Raiders in rain, sleet and wind prior to the bye how to manage inclement weather. This was worse.

“A couple times, my call sheet almost flew out of my hands. I have never been a part of that type of wind,” said Stefanski, who spent 14 years with the Minnesota Vikings prior to getting the Browns head coaching job this season.

“Just the random gusts of winds [made it worse],” said Mayfield. “There was a lull in the game there, but it would just pick up out of nowhere. When it gets in, it just swirls in circles through the stadium and you don’t know which way it is really blowing.”

All of which made Houston interim coach Romeo Crennel’s decision to defer the opening kickoff another regrettable concession to analytics. The Browns got the ball first and took a 3-0 lead, which they never lost. The deferral also forced the Texans to drive to the Bermuda Triangle in the fourth quarter with the game on the line. Stefanski made this same mistake in the Raiders game.

Crennel also made some questionable decisions regarding going for it on fourth-and-goal from the 2 early in the game when down, 3-0 ( Myles Garrett stuffed Watson for a 2-yard loss on a slow-developing quarterback draw play), and then changing his mind in the third quarter after a timeout and attempting a field goal on fourth-and-2 from the Browns’ 27 (Ka’imi Fairbairn watched the wind sweep it wide left).

Watson (20 of 30 for 163 yards, one touchdown) was able to put a scare into the Browns when he closed the deficit to 10-7 with 4:59 to play. But Chubb’s and Hunt’s indefatigable running kept Watson from getting one last possession. The Texans dropped to 2-7, 2-3 under Crennel's interimship.

“Hard-nosed. These guys are getting after it,” said Garrett, who also shared a sack of Watson with Sheldon Richardson, which he felt was his alone.

“When I watch Nick, it is like watching poetry in motion. I would not say it is Gale Sayers because he does not really have that fluidity, but just how smooth runs and how he gets by people, it kind of reminds me of that. Kareem, he is just a force. He will run through you. He will go by you. He will stiff-arm you. He runs really aggressive, and he will go anywhere he needs to get to that end zone or that first down.

“To have both of them, it is just wonderful to be a part of this.”

Wonderful is being 6-3 and still in the thick of the AFC wild-card chase.