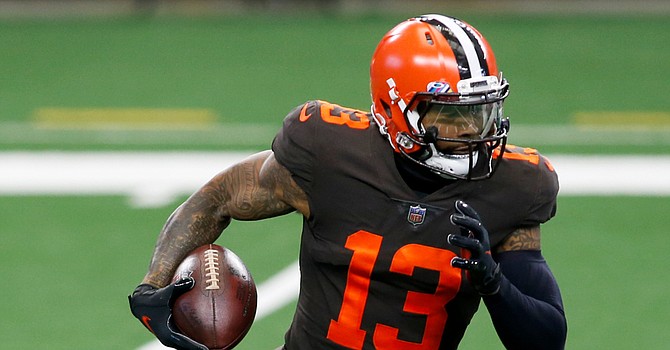 It started with Odell Beckham Jr. catching a 37-yard touchdown pass thrown by receiver Jarvis Landry, and it ended with Beckham escaping a negative play on a reverse and running 50 yards for a walk-off touchdown.

Surely, it was the game Beckham and Browns fans dreamed of. Perhaps even more so.

But what happened in between those personal OBJ highlights was an unbelievable team effort that bodes well for the Browns.

With franchise back Nick Chubb going down with a knee injury in the first half, the Browns traded blows with the Dallas Cowboy’s No. 1-ranked offense and floored Dak Prescott, Ezekiel Elliott, Amari Cooper and CeeDee Lamb to the canvas inside AT&T Stadium.

After a combined 152 offensive snaps and 1,074 total yards, the Browns emerged with a wild, 49-38 victory that pushed them to 3-1 for the first time since 2001 and left everyone exhausted.

It was their highest point total since scoring 51 against the Bengals in a fluke 2007 win.

And they did it without Chubb playing the final three quarters, with every one of the three other backs punishing the poor Dallas defense like Chubb but none over 100 yards, with Beckham and Landry being fed yet neither one totaling 100 yards, and with Baker Mayfield once again throwing for under 200 yards and attempting fewer than 10 passes in the second half for the third game in a row.

Myles Garrett had two more sacks, including his third strip-sack in three games, embattled safety Andrew Sendejo forced a fumble of Elliott, and cornerback Denzel Ward thwarted Prescott’s frantic comeback with an interception at the 3-yard line with 1:36 to play.

“I thought the guys fought their rear ends off for 60 minutes, and we needed all 60 minutes,” said Stefanski.

The Browns got so many plays out of their playmakers – offensively and defensively – including another magnificent day from their offensive line. But Stefanski should be included in the accolades.

He set the aggressive tone early with a daring receiver option pass from Landry to Beckham that worked to perfection for a 37-yard score. He was aggressive in scoring off the first two defensive turnovers. And when a 41-14 lead shrunk to 41-38 through the sheer will of Prescott’s arm, Stefanski’s calming presence on the sideline prevented the Browns from becoming unglued.

“I have seen games like that happen and lose. I am just happy we found a way to win,” said Beckham, who was rewarded for his patience.

Beckham had his first multi-touchdown game for the Browns – two on passes and a third on his 50-yard run, which resembled a punt return after he escaped the clutches of Aldon Smith, who never was a factor for the beleaguered Dallas defense. Beckham had 81 yards on five receptions (on eight targets) and 73 yards on two surprise runs.

The opening salvo, though, of catching a scoring pass from Landry, his soul mate, made it all the more special for Beckham.

“I would not trade that play for any amount of touchdowns in the game or if I was the one to throw it to him. That is my brother, like for real and for real life,” Beckham said.

Stefanski said he’d been sitting on that play for weeks.

“[I am] just always looking for ways to be explosive early in ball games,” the coach said. “That was something that I have had on the tip of my tongue a few other games, and I just did not get it called. I told the guys we were not going to go through another game without that one getting called. I would file it under trying to be aggressive throughout the game.”

Beckham’s two runs contributed to a remarkable 307-yard rushing game on 40 attempts for the team even though Chubb (43 yards on six attempts) went down at the end of the first quarter when Dallas nose tackle Trysten Hill fell on the back of his right leg away from the ball. Chubb will have an MRI on Monday to determine the severity of the injury.

In Chubb’s absence, Kareem Hunt sucked up a groin injury and had 71 yards and two touchdowns, and No. 3 back D’Ernest Johnson ran with the same fury as Chubb and Hunt and posted a career-high 95 yards on 13 carries.

““That is my boy. I call him ‘Slow Grind’ because he takes it slow, and he is just always working hard,” said Hunt. “He just did a great job of filling in. I told him we needed him. Nick went down so I told him, ‘I need you too, man.’”

The amazing rushing effort, paved by the offensive line, enabled Stefanski to limit Mayfield to 30 pass attempts – just nine in the second half. The Browns are now 8-2 when Mayfield attempts 30 or fewer passes in his career.

Mayfield completed 19 overall for 165, two touchdowns and no interceptions. He was saved by at least three excellent catches by Landry. Mayfield missed Beckham open behind the Dallas secondary with 6:11 to go. That could have been a knockout blow with the Browns ahead, 41-30.

As it was, the missed connection caused their fans to sweat out a wild finish. Prescott was unrelenting, completing 41 of 58 for 502 yards until Ward intercepted him at the end.

“We are learning that we are efficient when we need to be,” Mayfield said. “We just have to be more consistent. I think that is the biggest takeaway from today. We scored a lot of points, but we left a lot out there, and I truly believe that.”

If there’s more to come than 49 points, this indeed could be a special year.

The last time the Browns were 3-1 was in 2001. That’s when Butch Davis began transforming the Browns from an expansion team into a playoff contender.

Stefanski’s roster is much better than what Davis had in 2001, and he’s pulling all the right strings right now.