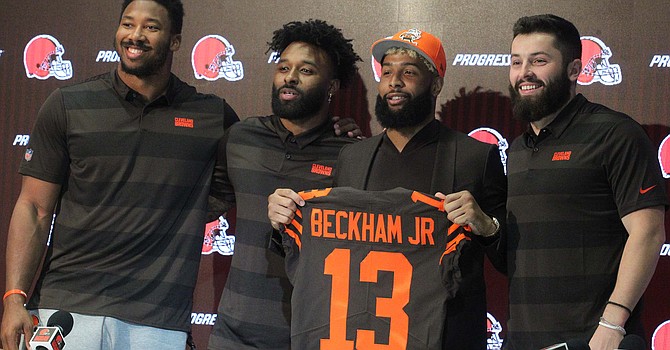 Isn't this the kind of game these guys have been waiting for? (Cleveland Browns)

First down: Preseason is over. On with the season.

Without a normal OTA season, training camp and preseason, NFL teams have used the first three games of the regular season to find their identities. Consider yourself lucky if you’ve been able to a.) win more than you’ve lost, and b.) avoid cataclysmic injuries. The Browns have been lucky. They’ve gotten some defensive players back who were injured in training camp. And, thanks to their September schedule, they’ve emerged with a 2-1 record for the first time since 2011. Now comes Sweet October, starting with a rare trip to Jerry’s World against the Cowboys. “We have to see where we are and who we are. This will be a real test for us,” said pass rusher Myles Garrett, who leads a contingent of Browns returning to their home state. In Garrett’s case, AT&T Stadium in Arlington, TX, is a mere 15 minutes from where he grew up. “Cowboys Stadium. You can make a name for yourself if you get a big win there,” Garrett said. “America’s team. All eyes are on them almost every week, so we’ve got to make sure to put on a big show.”

Second down: A matter of trust.

Given the Cowboys’ undeniable offensive firepower, this game is a good test of coach Kevin Stefanski’s trust in his quarterback. In September, Stefanski correctly surmised that the Browns have a much better chance of winning when relying on his sturdy and athletic offensive line and the dynamic running duo of Nick Chubb and Kareem Hunt. But there comes a time when the quarterback has to make plays to win, not just to build a lead. And this would appear to be the time. The Cowboys are prolific on offense and lacking on defense. Every quarterback they’ve faced has victimized their secondary. Stefanski has to decide whether to exploit that defensive weakness and let Baker Mayfield reconnect with Jarvis Landry and Odell Beckham Jr., or try to play “stall ball” to keep Dak Prescott & Co. off the field by hammering Chubb and Hunt and grinding the clock with time-consuming possessions. If this becomes a Texas Shootout, Mayfield has to prove he can trade punches, er, scoring passes, with Prescott. This could be a signature game for Mayfield – if Stefanski gives him the chance to prove it.

The Cowboys used to be running back Ezekiel Elliott’s team. No more. With oilman Jerry Jones committing $31.5 million this year to quarterback Dak Prescott, Jerry demands a return on that investment. So the Cowboys are slinging the ball at a record clip (partly because they’ve seldom held a lead), leading the NFL with 490.7 total yards a game and 383.3 through the air. Prescott has three receivers on pace for 1,000 yards – Amari Cooper (267 yards), Michael Gallup (246), and rookie CeeDee Lamb (230). And then there’s a fourth to watch out for – Cedrick Wilson (107). “They are very deep at receiver and they are very talented, but that is the NFL,” said Browns defensive coordinator Joe Woods. “I have coached DBs for a long time. You do not get a break, so it is the next challenge.” Woods will try to defend this offensive assault with cornerbacks Denzel Ward, hobbled by a groin injury; under-rated Terrance Mitchell; nickel back Kevin Johnson, making his second appearance after a six-week lacerated liver injury; and … who knows? … Tavierre Thomas or M.J. Stewart or A.J. Green. Conspicuously missing is Greedy Williams, the second-round pick from LSU in 2019, who is still out with a shoulder injury.

Some in the NFL really believe that – other than wins and losses -- a team’s turnover differential is the statistic that most reflects on quality of coaching. The Cowboys of Mike McCarthy – with all that talent – are minus-4 in takeaway-giveaway. The Browns of Kevin Stefanski are plus-3. Of course, Stefanski has reduced giveaways by limiting Mayfield to 9 and 7 pass attempts in the second halves of the last two games. What happens when Mayfield has to throw more? We shall see.