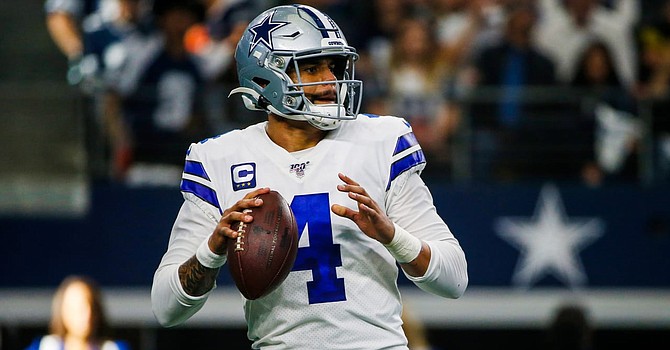 Despite a coaching change, Cowboys quarterback Dak Prescott once again is leading the NFL's No. 1-ranked offense in total yards.

1.Lucky for the Cowboys they’re in the NFC East, because their disappointing 1-2 start gives them a share of first place with Washington. With the reeling Eagles (0-2-1) decimated by injuries, the division title should be a lay-up for the Cowboys. But they’re a lucky recovered onside kick away from being 0-3. This will be the first of three straight home games (followed by Giants and Cardinals) and the Cowboys will be favored in all of them. The Cowboys will have over 21,000 at home games – the largest attendance of any NFL team in this pandemic season.

2.With the Packers, new coach Mike McCarthy once said he would never not call plays again. But he’s not calling plays with the Cowboys and it’s probably a good thing. Holdover offensive coordinator Kellen Moore has the offense ranked No. 1 again in overall yards per game and it’s eighth in scoring at 29.5 points a game. Moore runs mostly 11 personnel – one back, one tight end, three receivers. The big addition to an already stacked offensive lineup is receiver CeeDee Lamb. The 17th overall pick of the draft from Oklahoma already has a 100-yard receiving game and 230 yards in three games. Oh, by the way, that’s only good enough for third on the team behind Amari Cooper (267) and Michael Gallup (246).

4.Ezekiel Elliott, who has two NFL rushing titles in four seasons, was off to his best start through two games but has fallen to eighth in the NFL in rushing with 219 yards. Since he entered the NFL in 2016, Elliott has 154 runs of 10 yards or more – 36 more than runner-up Todd Gurley. But this season, Elliott has six “big runs.” The NFL leader is Nick Chubb with 12.

1.Dak Prescott’s regular-season W-L record of 41-26 (.612) ranks 11th among all active quarterbacks with at least 20 starts. Prescott’s contract status continues to be a storyline. He’s playing under the one-year guaranteed franchise tag of $31.5 million. The Cowboys will try again to sign him long-term at the conclusion of the 2020 season. Without progress, it’s possible he could be franchise-tagged a second time in 2021.

2.Mike McCarthy was eschewed as a coaching candidate by the Browns the past two hiring seasons. The Browns are one of three teams that McCarthy never lost to in 13 years as Packers coach. He is 3-0 against the Browns and the same against the Raiders and Chargers.

3.Defensive end Aldon Smith leads the NFL with four sacks through three games. That wouldn’t have been headline news eight years ago; Smith led the NFL with 19.5 sacks in 2012. What’s amazing is that Smith has been out of the NFL for five years dealing with substance abuse and personal conduct issues. Right now, Smith is giving Washington backup quarterback Alex Smith a run for NFL comeback player of the year.

4.McCarthy always seemed to have problems on special teams in 13 years as Packers coach. But one of his best hires with the Cowboys was stealing John Fassel from the Rams as special teams coordinator. Fassel is known for being aggressive and springing successful gimmicks on opponents. In three games, the Cowboys have tried two fake punts (unsuccessful) and recovered that amazing spinning onside kick against the Falcons, which produced the Cowboys’ only win. Lamb is off to a fast start as a punt returner (11.0-yard average on five returns), but kicker Greg Zuerlein has missed 2 of 9 PATs.