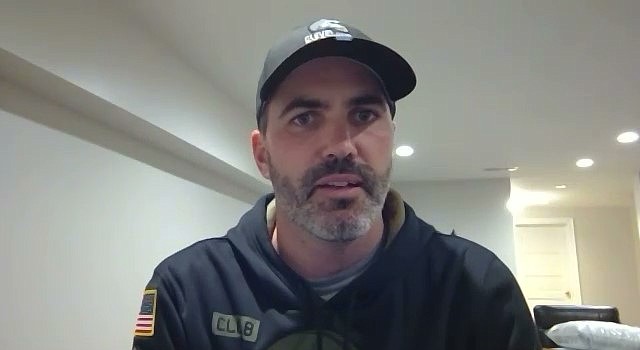 Kevin Stefanski has his team rolling with the punches of Covid-19 protocols. (Cleveland Browns)

The Browns have been exemplary in dealing with the coronavirus pandemic. The challenge never ends.

The team was forced to close its facility Monday morning for the second time in four days because a player tested positive for Covid-19.

Hubbard’s positive test did not result in a team outbreak, which has occurred on other teams. Contact tracing and subsequent negative tests allowed the Browns to finalize preparations for the game against the Houston Texans, which the Browns won, 10-7, amid 60 mph wind gusts and rain.

Janovich played in the game on Sunday and tested positive on Monday. He was isolated and the team followed the drill to which it has become accustomed. The building was evacuated, meetings were held virtually and contact tracing ensued to determine if the virus had spread.

“That is the world we live in right now, and we are ready to do whatever is necessary to keep everybody safe, first and foremost – keep our coaches, players and staff safe,” said coach Kevin Stefanski. “That is really where our mentality is. While doing that, we still have to prepare and get ready to play.”

Defensive tackle Larry Ogunjobi said, “I mean, this is kind of what 2020 is. It sucks, but it is just the nature of what we are in right now. We have been handling it since the start of training camp, as far as wearing our masks, following the right procedures and everything.

“So, I mean, we are not really fazed by it. We just have to continue to go through the protocols. I know some guys are kind of frustrated about it, but it is just once again the nature of what we got going on. It is one of these things where it takes all of us. It is a shared responsibility. It takes all of us to get it done. So, we are just going take it one day at a time, continue to roll with the punches and do what we have to do.”

Players who test positive can return to the team if they experience no symptoms and test negative two times separated by 24 hours. If there are symptoms, they can be out 10 days or longer.

Two successive games in gale force wind conditions and rain have had a profound effect on the Browns’ offensive and defensive rankings.

After losing to the Raiders, 16-6, and beating the Texans, 10-7, the Browns have dropped to 23rd overall on offense and improved to 15th on defense. A more accurate ranking is seen in points scored (tied for 18th) and points allowed (20th).

Still, there’s no getting around the fact the defense has made strides in the past two games. And a large part of that may have to do with the emergence of strong safety Ronnie Harrison.

In his third straight start after missing a game with a concussion, Harrison played every defensive snap against the Texans and was all over the field. He blitzed four times, was credited with a quarterback hit, a pass defensed and was second on the team with six tackles, including one in the open field that saved a first down.

“He is playing at a high level,” Stefanski said. “He is another player that is all about the ball. I know we did not get one yesterday, but he is very active around the ball, a physical tackler and you mentioned the blitzing. Yeah, I would agree with you in that he was active yesterday.

“I put Ronnie in that category of making plays and a guy that we can count on and we are going to continue to count on … I do like the role that Ronnie is playing.”

Sunday’s game marked the fifth time in nine games that Baker Mayfield attempted fewer than 10 passes in the second half of a game.

High winds and the powerful running of Nick Chubb and Kareem Hunt limited Mayfield to 4 of 6 passing for 43 yards in the second half against the Texans. One of those passes was a 21-yard completion to Rashard Higgins on third-and-18 that extended the Browns’ lone touchdown drive of the game.

“There were moments there where [the wind] was just whipping, and there was no way you could complete a ball. There were times in warmups that you could not throw it 10 yards. It was getting knocked down.

“I think it was a constant communication with myself and the offensive staff – kind of, ‘Where are we? Has it died down enough to call this play?’ Then a couple of times, we just tried to get Baker on the perimeter and maybe get him an easy completion or run it with him out there on the perimeter. That was what the game called for.”

The Browns led the NFL when they had 14 takeaways. Now they’re tied for eighth with three other teams with 14 takeaways …

Nick Chubb’s four-game absence with an MCL sprain dropped him out of the running to lead the NFL in rushing. He’s currently 20th with 461 yards. Derrick Henry leads with 946. Kareem Hunt is sixth with 633. But Chubb’s 6.1-yard rushing average leads all running backs …

Myles Garrett’s one-half sack pushed him back into the NFL lead with 9.5. Aaron Donald of the Rams and T.J. Watt of the Steelers have nine.