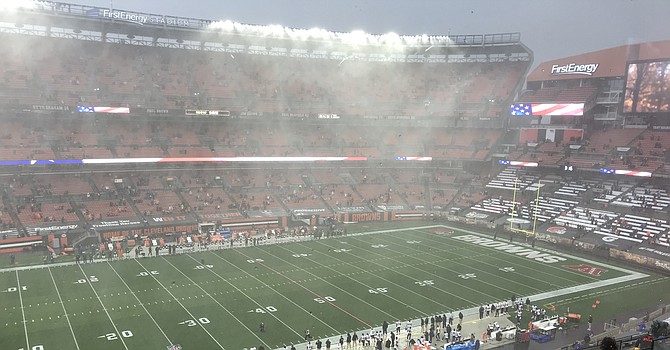 This was the scene during the National Anthem inside FirstEnergy Stadium. (TLOD)

Oncoming thunderstorms chased teams and fans inside FirstEnergy Stadium under shelter just prior to the opening kickoff of the Browns-Houston Texans game.

Wind gusts and swirling rain deluged the field during a videotaped presentation of the National Anthem with both teams locked in arms along their respective sidelines. Shortly after completion of the Anthem, a public address announcement instructed everybody to evacuate the field and seating bowl.

Forecasts and radar showed more thunderstorms approaching from counties west of the city.

The day started with periodic episodes of hard rain sometimes driven sideways by wind gusts of up to 60 mph.