Browns Beat The Weather This Time, And Texans, To Move To 6-3 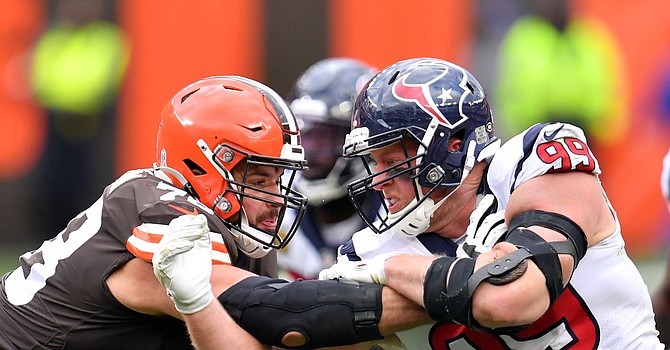 Instant takeaways from Browns’ 10-7 win over the Houston Texans …

1. Weather-tested: The Browns put their bye week to use learning from their mistakes in their last bad weather game. After a 35-minute thunderstorm delay, the rains subsided but 35 mph winds lasted throughout the game. The Browns played ugly football on an ugly day and shut out the Houston Texans, 10-7, to improve to 6-3. Their reunited one-two punch of Nick Chubb and Kareem Hunt carried the day – mostly the second half. The Browns held a 3-0 halftime lead because the Texans deferred the kickoff and gave up a field goal. After that, Houston kept the Browns in horrendous field position. But in the second half, Chubb and Hunt took over, and Baker Mayfield protected the ball well, throwing only 20 times without incident. The Texans missed a field goal and blew a scoring opportunity in the first half when the Browns held them at the 2 on third and fourth down. Chubb displayed his selflessness when he stepped out of bounds at the Houston 1-yard line with :56 left after breaking a run for 59 yards. It guaranteed the win because the Texans were out of timeouts. The Browns then took a knee two times. Chubb finished with 126 yards on 19 carries; Hunt 104 on 19.

2. Nothing easy: The Texans looked like they could have played into Tuesday without scoring. But they came alive on a 90-yard touchdown drive in the fourth quarter to make it queasy. DeShaun Watson made two big plays. The first was converting a third down with a 29-yard completion to Randall Cobb with blitzing safety Ronnie Harrison at Watson’s ankles. A subsequent roughness call on linebacker Mack Wilson thrust the Texans to the Browns’ 16-yard line. From there, Watson threaded a TD pass to former Browns tight end Pharaoh Brown with 4:59 to play. Even though Browns rookie returner Donovan Peoples-Jones muffed the kickoff at the Browns’ 3, the running game delivered the possession to ice the win. Hunt lugged the ball 6 times for 37 yards to burn the clock and Houston’s final timeouts.

3. Chubb awakens: Chubb was being held in check by the Texans’ 32nd-ranked defense against the run until money time. As the third quarter wound down, Chubb had rushed for only 33 yards on 13 attempts. But then he finished off the a nine-play drive with runs of 11, 11, 4 and 9 yards for the touchdown. Cody Parkey’s PAT in the closed end gave the Browns a 10-0 lead with 13:32 left in the fourth quarter.

4. Snooze time: The third quarter featured some bad football and bad officiating. Both teams punted once. The Texans missed a 46-yard field goal try to the safer closed end zone when Ka’imi Fairbairn pushed it wide left. The Browns were on the move into Houston territory when the quarter ended. They were aided by a great sideline catch by Rashard Higgins for 21 yards on third-and-18 when the Texans failed to challenge if Higgins came down in bounds. (It was close enough to challenge.) Then, on third-and-8 from the Texans’ 46, the Browns got a gift interference call on Vernon Hargreaves when Mayfield’s throw for Higgins sailed five yards over his head. Yes, there was contact before that.

5. Ugly, ugly, ugly: The Browns held a 3-0 lead at halftime due to two defensive stands in the second quarter. On the first, they stopped the Texans at the 2-yard line on a drop at the goal line by receiver Randall Cobb. The ball may have been touched by a finger of linebacker Mack Wilson. And then Myles Garrett tackled Watson for a 2-yard loss when Watson hesitated too long on a quarterback draw. (Garrett had his 10th sack of the season earlier.) On the next possession, Watson advanced the Texans to the Browns’ 24, then was sacked by Sheldon Richardson and Larry Ogunjobi for a 5-yard loss, suffered a delay-of-game penalty, and then Will Fuller was flagged for offensive pass interference. The Texans came out with their field-goal formation, but eschewed a 48-yard try into the Bermuda Triangle and Fairbairn executed a nice pooch punt to the Browns’ 4-yard line.

6. Wasted: The Browns made some mental miscues on offense. On their first drive, a shotgun snap sailed past Mayfield on third-and-1 from the Texans’ 7. Mayfield rounded up the ball and threw it away to avoid a deep sack. But he was flagged for intentional grounding when the pass did not reach the line of scrimmage. The Browns argued Jarvis Landry was in the vicinity. Cody Parkey salvaged three points with a 41-yard line-drive field goal just over the Dawg Pound goal post. Later, Landry muted a drive when he jumped up after an 18-yard catch and spiked the ball at safety Eric Murray, a former teammate of last year. Landry was slapped with an unsportsmanlike conduct penalty for taunting.

7. Missed: The Browns advanced to the Texans’ 37 on their last drive of the first half. But on fourth down, Mayfield had to adjust after intended target tight end Harrison Bryant was being held (no call). Mayfield tried to hit Landry breaking to the end zone, but the wind carried the ball too far. The Browns blew about 10 seconds before calling their first timeout with 35 seconds left.

8. New schemes I: Offensively, the Browns dusted off the pistol formation (half a shotgun) on their first possession. They used it to give Mayfield a better sight line to the middle of the field without totally tipping off their pass intention. On three successive plays, the pistol netted a 9-yard completion to Rashard Higgins running a slant, a 6-yard run by Chubb and then no yards on a reverse by Hunt on a convoluted play with three tights on the field with Hunt and Chubb.

10. Weather delay: The game was delayed about 35 minutes when severe thunderstorms ripped through FirstEnergy Stadium during the video presentation of the National Anthem. Soon as it was completed, a public address announcement instructed everyone to evacuate to safe shelter. After the storm passed, the teams returned at 1:25 p.m. and conducted a 10-minute warm-up period. The kickoff came at 1:37 p.m.

11. Pre-game notes: Jacob Phillips was the only mild surprise on the Browns’ inactive list. The rookie linebacker was listed questionable on Friday after practicing all week on a limited basis. Phillips missed five of eight games with a knee injury. All the returning injured Browns were back at their starting positions. Ronnie Harrison continued as the starter at strong safety