It Hasn’T Happened In 70 Years, But Could An Nfl Team Win A Game Without Recording A Pass? 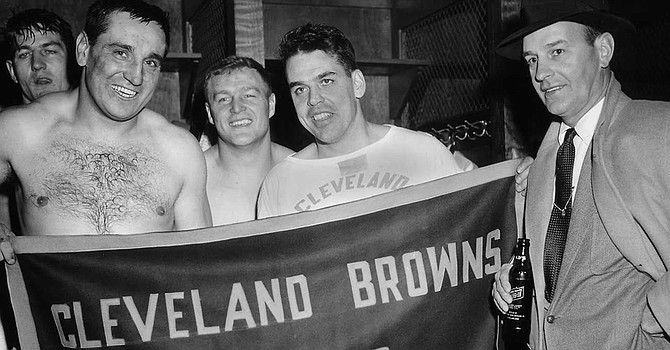 Among the least-known of the accomplishments of Paul Brown and Otto Graham was winning a game without recording a single pass in 1950 -- the last NFL team to do so.

Sometimes you watch the Browns’ running game pulverizing a defense and you think, “They could run the ball every play and win this game.”

One of those times was the fourth quarter against the Houston Texans.

Backed against their own 3-yard line and clinging to a 10-7 lead with 4:55 to play, the Browns did just that.

They ran and ran and ran. Kareem Hunt six times in a row. And then the hammer was applied by Nick Chubb on the seventh run. The Texans were helpless, out of will and timeouts.

Were it not for Chubb’s awareness to step out of bounds rather than extend the game, the Browns would have traveled the length of the field for a touchdown without chancing a Baker Mayfield pass amid 55 mph wind gusts pelting rain sideways and debris above the field like a Kansas tornado.

“I think both teams understood that game was not for the forward pass at times,” coach Kevin Stefanski said the next day.

In the fourth quarter of a tight game, the Browns, in fact, ran the ball 16 times for 150 yards. They attempted two short passes, both blown off their mark.

You wonder in this day of pass, pass, pass, the Browns could run, run, run. All game. Without throwing a pass. Like their forerunners did once before.

In 1950, the Browns won a game against the Philadelphia Eagles without recording a forward pass. No NFL team has done it since.

When the Browns were admitted to the NFL in 1950 after dominating the All-America Football Conference for four seasons, they were derided as unworthy upstarts by the arrogant, established league.

NFL Commissioner Bert Bell purposely scheduled the Browns’ opening game against the Eagles, the two-time NFL champions whose state-of-the-art defense had registered a shutout in the previous season’s championship game.

“All they do is pass and trap. They’re like a basketball team the way they throw the ball around,” grumbled Eagles coach Earle (Greasy) Neale.

The league consisted of 13 teams that season. The Browns and Eagles were in the same American Conference, so they played two times. And prior to the second meeting on a rainy December afternoon in Cleveland, Neale’s comment still burned in Brown’s calculating mind.

Under a steady rain that made the muddy Municipal Stadium field a slippery quagmire, the Browns took a 7-0 lead on a Warren Lahr interception return and then played for field position all afternoon. The Browns punted 12 times, kicked two field goals, achieved one first down and won, 13-7, without officially recording a pass attempt. Graham’s single pass, a completion, was wiped out by a motion penalty.

“It was a grandstand play,” Brown later was quoted by author Jack Clary, “but I wanted to prove we could win the hard way.”

NFL teams had won without attempting a pass four previous times. But not since.

It couldn’t happen nowadays. Could it?

But as the weather turns – as it has in Cleveland the past two Browns games – the game becomes survival of the fittest. Running the ball becomes a premium, which is what the Browns do best, of course.

Could an NFL team win without throwing a single pass?

“You’re going to have to play in a blizzard,” said Ernie Accorsi, former GM of the Colts, Browns and Giants and a league historian. “The other thing is, you might be down to a third-string quarterback. Those things can happen. But it’s going to take circumstances. I just think teams are so proficient on offense now.”

In a game in 2007 in conditions resembling a snow globe, the Browns beat Buffalo, 8-0, while completing only nine passes. Phil Dawson booted two field goals in that game, aiming each one outside the goal posts to play the 32 mph wind gusts just right.

In an email response, Dawson wrote:

“The team that best handles adverse conditions on extreme weather days will be the team that wins the game. Most bad weather games are close. Weather neutralizes advantage. The team that understands how weather will affect the game can now formulate a game plan that has a chance of being effective. The team that doesn’t think about the forecast and tries to figure it out on gameday will struggle.

“I made a career of preparing for adverse conditions. I had to take extreme measures to do my job. A team should be no different. If that calls for very few pass attempts, so be it. I think the 2020 Browns are positioned well for a run-heavy game. On a side note, I find it humorous that on bad weather days, the quarterbacks are affected dramatically, yet the kickers continue to make kicks.”

Stefanski said, “Anything is possible. There have been some games recently that have had some bizarre weather out there. Our game, you were still able to throw at times when the wind maybe died down a little bit. But I can picture some snowy games and some games that seem to be occurring in a hurricane where they still are throwing the ball. I would say it would be unlikely.”

“To go a whole game and just run it every time, I do not know if you can get away with that one,” said Browns defensive coordinator Joe Woods. “At some point, you just put everybody on the line of scrimmage and say, ‘You are not going to run.’”

Woods was with the San Francisco 49ers last season when they bludgeoned the Green Bay Packers in the NFC Championship Game, 37-20, while attempting only eight passes.

“That is pretty impressive. It might be able to be done,” said Browns left guard Joel Bitonio. “Eight passes is a lineman’s dream for sure.

“You would have to get [ahead] early and then maybe throw in some wrinkles, some reverses, some quarterback boots and things that are still going to throw the defense off. You definitely would have to get up early because [any coach] would not want to be trying run the ball down two touchdowns for too long.”

With Chubb and Hunt, you never know.

The Eagles will be in town, after all.