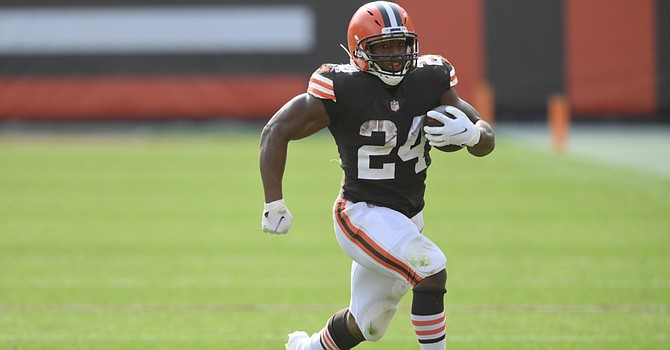 Nick Chubb's return from a knee injury allos the Browns to return to their running identity in the stretch run for a playoff berth. (News5Cleveland)

The first game of the rest of the Browns’ season finds them refreshed, healthy, and eager to continue their playoff chase – 1-0 at a time. Even though they matched their best first-half record in 22 seasons, the Browns fell out of the seven-team AFC playoff field with that last windswept 16-6 loss to the Raiders. Which makes every game against an AFC foe extra important in the second half. They are bolstered by the expected return from injuries of running back Nick Chubb (knee), right guard Wyatt Teller (calf) and tight end Austin Hooper (appendectomy), and the healing of assorted ailments to receiver Jarvis Landry (ribs), running back Kareem Hunt (groin and ribs) and defensive end Myles Garrett (ankle and knee). The Texans arrive as the best 2-6 team in the NFL after a brutal early schedule resulted in losses to the Chiefs, Ravens, Steelers and Vikings, and the firing of head coach/GM Bill O’Brien. Disjointed after the transition to interim coach Romeo Crennel and dysfunctional on defense, the Texans still are led by two superstars who have never lost to the Browns, quarterback DeShaun Watson (2-0) and defensive lineman J.J. Watt (3-0).

There are two unavoidable and unmistakable mismatches in this game – the Texans’ sixth-ranked pass offense against the Browns’ 24th-ranked pass defense, and the Browns’ fifth-ranked run offense v. the Texans’ 32nd-ranked run defense. So, you would think it would come down to Watson controlling the game with his quarterbacking v. the Browns controlling it with their running. Watson has over 275 yards passing and a 105.0 passer rating in five consecutive games. In his two easy career wins over the Browns, Watson has four touchdowns, one interception and a 102.7 rating. Watson has controlled the Browns without needing to use his legs. But Browns defensive coordinator Joe Woods succinctly points out, “When you do everything right, then you have to chase him down, which creates another problem.” Defensively, the Texans have allowed 138 yards rushing to Kansas City rookie Clyde-Edwards Helaire, 238 total to the Ravens, 109 to Pittsburgh’s James Conner, 130 to Minnesota’s Dalvin Cook, 212 to Tennessee’s Derrick Henry, and 99 to Jacksonville rookie James Robinson. The return of Chubb and Teller, and the restful week for Hunt, would figure to give coach Kevin Stefanski the incentive to re-charge the running game, which fell from No. 1 to No. 5 in Chubb’s and Tellers’ absence. Especially if weather forecasts for rain and high winds come true.

The return of Chubb and Teller brings the Browns back to their offensive roots as a physical running team above all. Before suffering a sprained MCL in his right knee in the fourth game, Chubb was third in the NFL with 335 rushing yards, first with a 5.9 rushing average, and tied for second with four rushing touchdowns. The energy he brought to the team in practice was best captured by left guard Joel Bitonio, who exclaimed, “When you see Nick in the huddle smiling and just ready to play football again, it makes you happy.” Before his calf injury in the Colts game on Oct. 11, Teller was not only an analytics sensation, ranking No. 1 among all offensive guards by Pro Football Focus, but also an emotional leader. “He definitely brings that ‘edge,’” offensive coordinator Alex Van Pelt said of the road-grader. “I think the guys feed off that. When he plays, he is very aggressive and very physical. Hopefully, getting him back here soon will bring that nastiness spot back.” The only question is if the Browns will put a pitch count on Chubb in his first game back. “The key is to get him as healthy as possible for that second half of the season push,” Van Pelt said. “Winter football is coming. We are going to have to rely on the run game a fair amount. To have him healthy and full of energy there for the second half is important.”

Fourth down: Watch out.

Remember when the Browns upset the reigning Super Bowl champion New Orleans Saints in the Superdome during the 2010 season under Eric Mangini? They executed a few gadget plays on special teams authored by venerable special teams coordinator Brad Seely to do it. Seely retired as Texans special teams coordinator because of the pandemic but handed off his duties to assistant Tracy Smith. The Texans haven’t tried anything exotic yet, but they have blocked a punt and a field goal, and recovered an onside kick. The Texans, at 2-6, have nothing to lose now and might be inclined to dust off Seely’s gadget playbook if the opportunity arises. “Tracy Smith has done a nice job and has taken what Brad did and been even more creative,” Browns special teams coordinator Mike Priefer said. “He is a young guy. He is creative. They are very well-coached team. When we saw them on the schedule and when we had them after the bye, we knew we were going to use that bye to not only self-scout but to really study Houston because they do such a good job.”