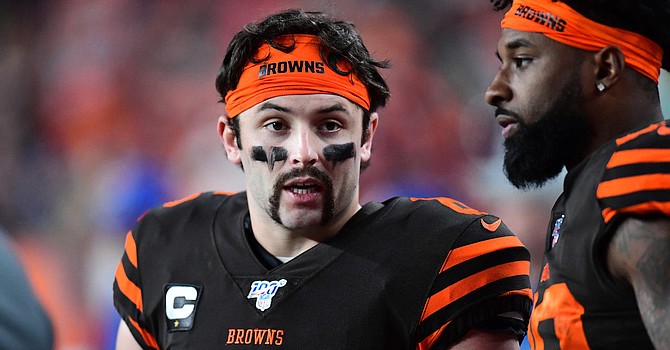 Baker Mayfield and Jarvis Landry connected on a TD for the second game in a row.

1.They did it: The Browns are off life support after a brutal 21-7 win over the Steelers that ended in a melee after Myles Garrett and Larry Ogunjobi took vicious cheap shots at Pittsburgh quarterback Mason Rudolph. Their first two-game winning streak upped their record to 4-6 overall and 2-0 in AFC North games for the first time since realignment in 2002. But this was far more difficult than it should’ve been. The Browns failed to take advantage of two interceptions of Mason Rudolph in Pittsburgh territory. They missed two field goals for the first time this year. And they gave the Steelers a touchdown with three defensive penalties totaling 58 yards on a third-quarter series. They finally capitalized on Rudolph’s third interception – second one turned in by linebacker Joe Schobert. Baker Mayfield’s 8-yard laser throw was caught off the shoulder of linebacker Mark Barron by tight end Stephen Carlson, an undrafted free agent from Princeton. It was the highlight play of a big night for Mayfield, who scored one TD and threw for two in his first career win over the Steelers. Mayfield did not commit a turnover against a Pittsburgh defense second in the league with 26 takeaways. Nick Chubb went over 1,000 yards rushing on the season with 92 on 27 carries. Safety Justin Burris added a fourth interception of Rudolph with 3:54 left. The Steelers, who lost five players to injuries during the game, dropped to 5-5.

2. Ugliness: Things got ugly at the end of the game when Myles Garrett went beserk on Rudolph after a late hit after a throw with :08 left. Under a pile, Garrett yanked off Rudolph’s helmet and then struck the quarterback in the head with it. Steelers players rushed to the pile and center Maurkice Pouncey repeatedly kicked Garrett on the ground. This likely could result in a suspension of Garrett. Larry Ogunjobi also got in a cheap shot on Rudolph on the play. Garrett and Ogunjobi were ejected.

3. Noggin knockers: The Browns knocked Pittsburgh receivers JuJu Smith-Schuster and Diontae Johnson out of the game with concussions on brutal helmet-to-helmet hits. Damarious Randall was ejected for his hit on Johnson. Greedy Williams knocked Smith-Schuster out with a concussion in the first half. Williams was not ejected or penalized.

4. Immaturity personified: The Browns let the Steelers back in the game with a horrible defensive series that resulted in Pittsburgh’s first touchdown with 5:39 to go in the third quarter. Three defensive penalties accounted for 58 yards in what amounted to an 87-yard TD drive. Randall was ejected for a vicious helmet-to-helmet hit on Johnson that drew blood from Johnson’s ear and resulted in a concussion. The other Browns penalties on the scoring drive were an illegal contact by safety Juston Burris and a pass interference by Williams.

5. Pass, pass, pass: If you thought the Browns’ offensive gameplan would be to run rather than pass into Pittsburgh’s turnover-happy defense, you would be wrong, of course. The Browns came out attacking by air in the first half. Mayfield connected with single-covered Odell Beckham Jr. for 42 yards to set up a Mayfield 1-yard sneak for a touchdown. The second touchdown was made possible by a Mayfield bomb to – yes -- KhaDarel Hodge. Originally it went for 59 yards to the Steelers’ 18. But Mike Tomlin successfully challenged and Hodge was ruled down by contact at the Pittsburgh 38 – saving Tomlin 18 yards. Once inside the Steelers’ 10, the Browns resorted to the pass again. Mayfield was in trouble and threw it up for Hodge in the end zone, drawing a pass interference on Joe Haden. On first-and-goal, Mayfield threw to Jarvis Landry, wide open, for the touchdown and 14-0 lead. In the first half, the Browns' play selection was 19 pass attempts v. 11 runs, and one of the runs was Mayfield's sneak.

6. Will he learn?: Kitchens’ greediness to throw caught up with him late in the half. The Browns’ defense forced a turnover on a diving tipped pass by Denzel Ward that was intercepted by Morgan Burnett and returned to the Steelers’ 30-yard line. The ensuing play-selection: Pass incomplete for Landry, Chubb 3-yard run, and pass incomplete for Landry, who did well to break up an interception. Austin Seibert’s 45-yard field goal attempt to the Dawg Pound end zone was missed wide right. It was Seibert’s first field-goal miss after 16 makes. Seibert then missed one from 50 yards -- again, toward the Dawg Pound -- with one tick on the clock in the third quarter.

7. Bermuda Triangle: Pittsburgh’s Chris Boswell also missed from 44 yards to the Dawg Pound. In five games in FirstEnergy Stadium, kickers have made only 2 of 8 field goals and 10 of 14 PATs at the Dawg Pound end zone.

8. MASH unit: The Steelers lost four players to injuries in the first half, including two key ones on offense – Smith-Schuster (concussion) and running back James Conner (shoulder). Third cornerback Artie Burns (knee) and backup linebacker Olasunkanmi Adenlyl (knee) were the others lost for the game. The Browns lost Burnett with an Achilles injury. It could end Burnett's season.

9. See Hunt: Kareem Hunt’s amped up adrenalin rush was just as evident in his second Browns game as in his first. He made a big play on the Browns’ first third-down conversion. Mayfield escaped pressure and found Hunt for a 20-yard completion. Hunt also made a third-down conversion on the next possession with a great effort after a catch.

10. Darn it: The Browns should have had a second defensive turnover in the first half when Justin Burris’ strip-sack on a blitz sent the ball rolling on the ground. Sheldon Richardson tried to scoop it up and missed, and Pittsburgh recovered. A subsequent sack of Mason Rudolph by Chad Thomas knocked the Steelers further out of field goal range on their last possession. They had advanced to the Browns’ 28 in the final two minutes and ended up at their 48 – a net loss of 24 yards. The Browns did have a second takeaway in the third quarter on a sliding interception by linebacker Joe Schobert. But once again, the offense could not cash in.

11. Gamesmanship: The Browns selected Chris Hubbard and Morgan Burnett as game captains, along with Dontrell Hilliard. Hubbard and Burnett are former Steelers.