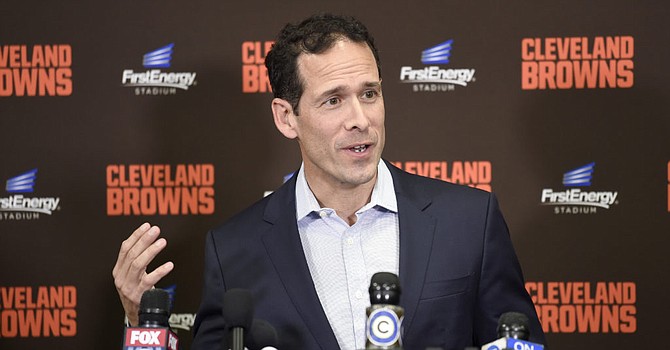 The Man Behind the Curtain stepped in front of it on Tuesday.

Yes, there was a Paul DePodesta sighting at the press conference in the FirstEnergy Stadium interview room introducing Kevin Stefanski as new Browns coach.

DePodesta is a mix of Cleveland’s Wizard of Oz and Sasquatch – all-knowing and all-powerful in the business of the Browns, but seldom seen or heard.

You expected him to emerge through a ring of smoke, wearing a wizard’s cape and tall pointy hat, brandishing spreadsheets and computer print-outs.

The Harvard-educated analytics maven of Moneyball fame not only survived the 1-31 Sashi Brown-Hue Jackson era, he toppled “Buddy Boy” John Dorsey and “Whoopty-hell” Freddie Kitchens, and surpassed even Baker Mayfield as the most powerful man in Berea – even though he resides in San Diego. In the surfy, seaside neighborhood of La Jolla, gloriously overlooking the Pacific Ocean at the southern tip of California, to be exact.

“I have seen a report that I live in San Diego, Calif. I think my wife and kids would take issue with that characterization,” DePodesta, 47, joked. “Look, I have been here every week since the beginning of training camp.”

DePodesta’s four school-age children, he confided, often ask him the same question as Browns fans 2,400 miles east: What exactly do you do?

“Look, Kevin talked a lot today about a shared vision,” DePodesta said. “I think my role, really first and foremost, is to not only help us create but also implement that shared vision, and then ultimately make sure that we stick to it, really relentlessly and that is really my role.

“I look at all the processes that are within a football operation. Whether that is hiring someone, whether that is how we do scouting, whether it is how we look at things with numbers. I sort of dig into all those processes and make sure that they align with our vision and that we all as a group continue to stay aligned and be on the same page.”

No doubt Haslam’s impulsiveness has strayed the Browns from DePodesta’s vision.

So now DePodesta is back in power, forwarding Stefanski into the coach’s hot seat, and choosing the general manager to pair with him. All of which means that DePodesta will be pulling the strings on player acquisition again.

“I am not going to pick the players, but I am going to try to make sure the players we do pick align with our vision of what we believe is a winning franchise,” he said.

“I have had the opportunity to be around some great organizations in multiple sports, and one thing that is pretty clear across all of them is that they all have an identity, a way. You hear about ‘The Patriot way’ or back in the day, ‘The Dodger way’, or whatever it might be. The teams that are great are relentless about implementing that way.

“That is what we need to do here and that really is my charge. My charge is not to watch tape and say, ‘Oh man, this guy has got real good feet.’ We have scouts that are way better and way more qualified to do that than I am to do that, but when we come down to make a selection, it is my role to say, ‘Okay, are we doing, are we making a decision that actually aligns with our way and that makes sense?”

DePodesta is amused by the misconception of analytics among coaches, players, fans and media. He said he demystified his organization-wide use of analytics during his interviews with the team’s eight coaching candidates.

“I think people have a really warped view of what analytics is,” he said. “I think I may have a very different conception of what everybody else has. When I think of analytics, I just think of having sure frameworks to make decisions under uncertainty.

“I mean, look, everything we do in these jobs, is really built around uncertainty. What players are we going to take in the draft? What we are going to call on third-and-eight? It is all about uncertainty. So what frameworks can you create that at least stack the odds in your favor … that give you a better chance of being successful? It is not necessarily about numbers and spreadsheets.

“For us, in terms of what the analytics said about Kevin Stefanski, my answer would be: this is what our references said. This is the personality testing that we did. This is what the interview process was. Those are not numbers or again spreadsheets, or anything like that. But it is the framework we used to try to come up with the best candidate. And ultimately, Kevin checked all the boxes."

It takes a new breed of coach and GM to accept working under the auspices of an absentee analytics maven with the ear of the owner and holding them accountable to abide by his vision, not theirs. Stefanski is such a coach. Young Andrew Berry, the former Browns executive and current GM candidate, falls in line, too.

DePodesta confirmed his contract is up, but neither he nor Haslam intend for him to be leaving any time soon.

"I am not concerned about it. I expect to be here,” he said.

"Here" may not necessarily be Cleveland all the time.

“It has not been an issue. Like I said, I am here every single week and we get our work done,” DePodesta said.