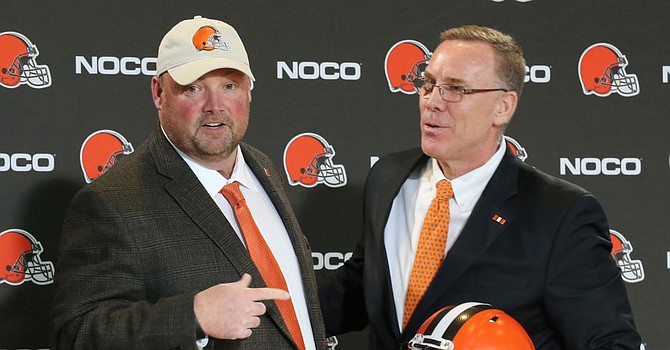 1.When Jimmy Haslam was asked for elaboration on the parting with GM John Dorsey, he said, “I do not really want to get into that. I do not think it is fair to John or fair to us.” That lame cop-out, actually, is not fair to Browns fans, who saw Dorsey populate the roster with more talent than any Browns team in 20 years.

2.Later, Haslam opened the window a little more when he pretty much indicated that Dorsey had no use for Paul DePodesta and the analytics-intensive method of basing all decisions on statistical analysis. “I think [the role of NFL GM] is going from just being a scout to somebody who is assessing players with the variety of whether it be traditional scouting, whether it would be using data to help make decisions -- which is really what analytics is -- to coordinating other key functions in the organization,” Haslam said. “I think there is a tremendous opportunity for us to do better in that area is all I can say.” Get ready to include SPARQ scores again in all pre-draft speculation.

3.I wouldn’t be surprised if Josh McDaniels pulled out of the Browns coaching search before they make a decision. He’ll probably go through with his interview just to verify for himself the stuff he’s heard.

4.I don’t know what to make of Haslam’s refusal to deny the report that he is very interested in Urban Meyer as coach. I asked, “Is Urban Meyer a candidate?” His response was: “Right now, we are just focusing on people with NFL experience.” I followed up with, “How do you respond to reports that you are interested in him?” He answered, “I think it is pretty clear what I said.” Huh? One possibility: If the coaching search blows up, Haslam might have Meyer waiting as an insurance blanket. Either that or he is co-opting with Meyer to force the hand of Jerry Jones to call in Meyer to replace Jason Garrett as Dallas Cowboys coach.

5.There’s very little defense for the performance of Freddie Kitchens other than to say it was his first year and you’d expect him to improve in his second year. “We just did not feel like the team made enough progress during the course of the year and decided to move forward,” Haslam said. If Haslam were judged on the same “improving” basis, he wouldn’t be able to return as owner after five coach/general manager regimes in eight years. His decisions get worse, not better.

6.None of the reported Browns head coach candidates checks more boxes than Mike McCarthy. I fear, though, that DePodesta might not trust McCarthy’s professed reinvention as an embracer of analytics. McCarthy, 56, with nine winning seasons in 13 years as Packers coach, might figure, “I’ll go along with this for now” just to get the job. See: Hue Jackson.

7.A few years ago, Eliot Wolf was a hot candidate for NFL GM jobs. Haslam, in fact, sought to interview him for one of his regime changes. For whatever reason it didn’t happen and Wolf was content to wait it out in Green Bay to eventually replace Ted Thompson. When Thompson finally retired and Wolf was bypassed for Packers GM, he bolted to Cleveland under Dorsey. Now that the Browns GM job is open, Haslam said Wolf isn’t a candidate for promotion. “We will go outside of the organization to find our next GM,” Haslam said. One possibility in a tandem with McCarthy is Jon-Eric Sullivan, Packers co-director of player personnel. It might be a tough turnabout for Wolf. He was Sullivan’s boss in Green Bay.

8.Baker Mayfield bolted out of Cleveland without addressing the media, so his thoughts on Kitchens’ firing were never recorded. In the last few weeks, though, Mayfield failed on a number of occasions to publicly endorse Kitchens. “Whatever happens, happens,” was his standard reply on questions about Kitchens’ future. As for Dorsey’s abrupt dismissal, we don’t know Mayfield’s feelings. But Haslam said he conducted exit interviews with “25 to 30 core players,” including Mayfield, before blowing up both Kitchens and Dorsey. So it’s safe to assume Mayfield threw both under the bus because Haslam had nothing but sympathy and praise for Mayfield. “I think with everything that was asked to put on his plate both in terms of leadership and as a player in his first full year, he did a remarkable job,” Haslam said. Dorsey and Kitchens were Mayfield’s biggest advocates in the building for two years. But when it came time for Mayfield to repay that loyalty, there was nothing.

9.It’s starting to feel inevitable that DePodesta will eventually officiate the marriage of Kevin Stefanski as Browns coach and Andrew Berry as GM.