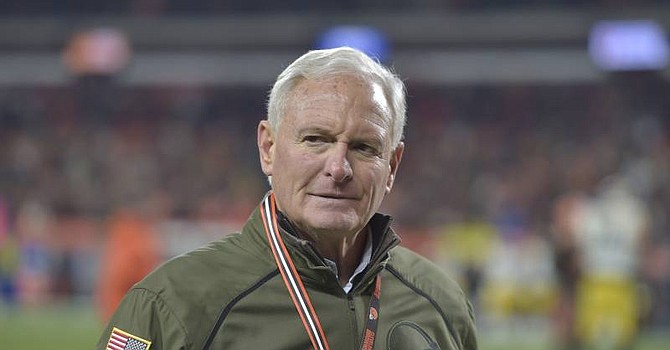 Jimmy Haslam thinks he's going to get it right this time. (Bleacher Report)

Jimmy Haslam said the Browns are more determined than ever to get it right this time.

These are really hard decisions.

For the sixth time in eight years as Browns owner, Haslam is looking for a head coach and a general manager.

1. The head coach will be chosen first.

Haslam: “The head coach will be involved in the hiring of the GM. I want to stress that it will not be solely the head coach’s decision. It will be a collaborative process involving ownership and several other members of top management, if you will, as we hire the GM.”

2.The search committee for the coach is set.

Led by Paul DePodesta, chief strategy officer, it includes Haslam; Chris Cooper, vice president of administration; J.W. Johnson, executive vice president and Haslam’s son-in-law. Jimmy and Dee Haslam will make the final decision on the coach after input from everybody else.

3.DePodesta sat in on the last two coaching searches, but his recommendations weren’t heeded. Now it sounds like he has greater influence, though Haslam is reluctant to elaborate.

Haslam: “We think Paul is really good at this type of position. If you think about it, all he has done his whole adult life is gather data to help make good decisions, so we think he is ideally suited to lead this process.

“Paul’s job will stay exactly the same as it is. He’s in charge of strategy, reports to ownership. He’ll do everything he can to support the general manager and the head coach.”

This would seem to eliminate former Ohio State coach Urban Meyer, who was reported to be a candidate of interest of the Browns.

Haslam: “Right now, we are just focusing on people with NFL experience.”

So, was the report that the Browns are interested in Meyer inaccurate?

Haslam: “I think it’s pretty clear what I said.”

5. When Haslam hired Kitchens, he realigned his organization and had Kitchens report directly to Dorsey, the GM. Now he’s going back to the setup that had both the head coach and general manager report to ownership.

Haslam: “In you’all’s terms, we will not have an ‘arranged marriage.’ … the coach and the GM will report to ownership as equals and obviously married up with each other.”

6.Haslam disputes that having the coach and GM on equal footing could lead to backbiting when times are tough.

Haslam: “It goes back to that alignment and making sure that people are properly aligned and everybody is heading towards the same goal and vision. We talked to the players as a group on Monday, and we talked to all of football operations on Tuesday afternoon. The message was listen, if it does not have to do with one of these three things, you are not doing the right thing – the first is winning; the second is improving as an individual; and the third is helping the team.

“We are going to make sure that whoever we hire as a head coach and whoever we hire as a GM is all focused on that – about the Browns winning games, about the Browns making the playoffs, etc. That may sound like a soft-line answer, but having learned from our past mistakes, we are more determined than ever to get that right this time. That is why we decided to go head coach first and then GM so that the head coach could be involved in that process.

“Listen, there are no guarantees – you know that – but hopefully, we will have learned from our past mistakes and do a much better job.”

7.The head coach and general manager must not only be open to accepting data compiled by DePodesta and his staff for all decisions, but also must utilize it.

Haslam: “I think [the GM’s role] is going from just being a scout to somebody who is assessing players with the variety of whether it be traditional scouting, whether it would be using data to help make decisions, which is really what analytics is to coordinating other key functions in the organization.”

And the coach must use DePodesta’s data, too.

Haslam: “All we are trying to do is to take facts, and if Baker [Mayfield] is better out of a certain formation or a certain play, we are going to try to put him in position where he can be successful. That is all analytics is. It is using data to help you make better decisions.”

8.Haslam and Johnson probed “25 or 30 players” in exit interviews to formulate the qualities sought in both the coach and GM.

Haslam: “They really do want strong leadership. We are looking for a strong leader, one; someone who is smart, two; has really good football acumen, three; and then will work within the organization. It is not ‘my way or the highway,’ and will work within the organization for the best result. I also think we want somebody who is a continuous learner and somebody who is trying to get better all the time. I would say those are the four or five characteristics.

“On the GM, it is really not a whole lot different. The leadership piece is a little different than the head coach, but I would say the other attributes are the same.”

9.Eliot Wolf, who is still on board as the assistant GM, is not a candidate to be promoted to GM.

10.The organization’s lofty opinion of Baker Mayfield has not wavered.

Haslam: “Let me say this, Baker caught a lot of grief this year, and I think with everything that was asked to put on his plate both in terms of leadership and as a player in his first full year, he did a remarkable job. We need to do everything we can to help Baker realize his full potential. That is something all of us in this organization are focused on.”