Why Odell Beckham Jr. Was Not Happy About That Historic Completion To Jarvis Landry To Open The 49ers Game 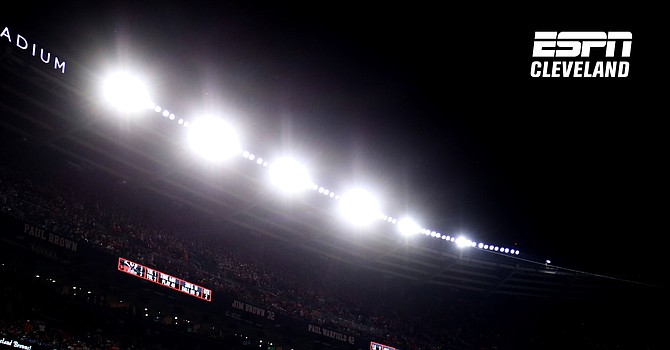 Takeaways from practice and interviews …

1. The rest of the story: The Browns’ first offensive play against the 49ers was a bit historic – a wide receiver option pass from Odell Beckham Jr. to Jarvis Landry.

It was Landry’s 500th career reception. And it was the first time the two good friends hooked up for such a trick play. Landry said they never were able to convince coaches at LSU to pull it off.

But while Landry was all smiles recounting it, Beckham was dejected and here’s why – he believes his blown read cost the Browns a touchdown.

The pass to Landry went for 20 yards. But farther down the field, Antonio Callaway had defenders beat by five yards at mid-field.

“If I’d have it back, I’d have thrown it to Callaway,” Beckham said. “That’s what we’d drawn it up for.”

Beckham said he couldn’t resist delivering when his eyes locked on Landry.

“I couldn’t look at him and look past him,” Beckham said. “I had to throw it to him.

“Just being the first play, [I] wanted to get the drive going, take a safe throw. I look at that [mis-read] and the momentum could’ve been completely different. That’s something I live with. I’ll never forget that play.”

Nor will Landry, but for a different reason, of course.

2. About that defense: The Browns’ struggling offense dominates discussion, but Steve Wilks, for one, is embarrassed with the play of his defense against the 49ers.

After the 31-3 loss Monday night, coach Freddie Kitchens fell on his sword for having too many offensive plays in the playbook and for asking too much of Callaway, who was active for his first game after league suspension. On Thursday, Wilks blamed himself for setting up the defense for failure.

“When you look at the identity of this defense, each week you’re going to tweak a few things. In the previous two weeks, I did that and we performed well,” he said. “What I did was get outside the fundamentals of what we do. What you saw was a defense thinking too much, couldn’t get aligned, played slow … when you see that as a unit, that’s on me.”

I wondered if Wilks regretted staying in his base 4-2-5 alignment – safety Jermaine Whitehead being the extra DB – against San Francisco’s two-back, tight end-oriented offense, and not employing a traditional 4-3 with a third linebacker.

“I don’t think that really had anything to do with the outcome of the game, to be honest,” he said. “We didn’t align correctly at times. I thought we were thinking too much. We didn’t set the front right. That’s on me. I think we were trying to do too much.

“There’s times you’ll see a guy or two, sometimes a position group, that will struggle, but when the whole defense looks lethargic, slow, I put that on me. We’re going to get it corrected.”

3. Skittish or not?: Baker Mayfield’s performance in the red zone this year (4 of 26, three touchdowns, two interceptions) has been an increasing focus of discussion.

I asked coordinator Todd Monken if he believes Mayfield has been skittish, frantic, overly-excited (choose one) on plays in the red zone and that might be part of the problem.

“My sample size is small,” he responded. “I don’t see that in practice. I didn’t see that on the throw to Antonio (which was bobbled and then intercepted at the 49ers’ 1-yard line). In my mind, he was decisive in where he was going with the ball. We didn’t execute the play, for God’s sake. It was catastrophic. I mean, it completely changed the game. From then it was not fun. At that point, we were OK. We were still finding our way, but …

“There’s a lot of things that go into it. Really is. What can make a QB that way? Scheme … protection … route-running. All of the above. It’s not just one thing. But I haven’t seen that so much … yet. But to me, a [fair] sample size is a season.”

4. Brownie bits: Callaway, who was hoping to be the No. 1 return specialist this year, will be phased into the role now that he’s back from suspension, special teams coordinator Mike Priefer said …

Receiver Rashard Higgins appears closer than ever to making his first game appearance since injuring a knee on the first series of the season opener. Higgins has had two days in a row of full participation in practice. “Higgins looked better,” Kitchens said. “We will see where we are at the end of the week. With some of these things, you just have to see how they are the next day and see how they respond to what they did today from a physical standpoint.”