Rashard Higgins As The Cure For Baker Mayfield’S Ills? Anyone Have A Better Solution? 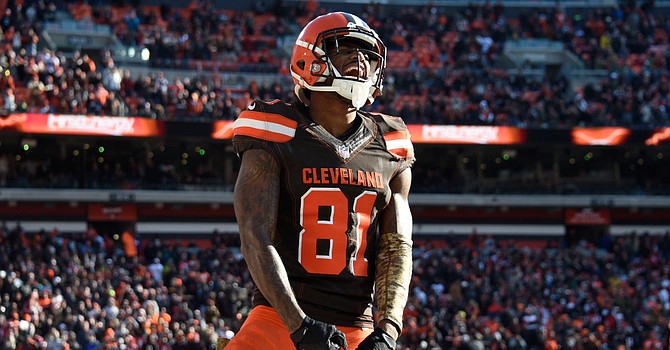 This from Rashard (Hollywood) Higgins:

“I’m healthy … I’m ready for the Patriots, man. I really wish this wasn’t a bye week. I’m ready to play.”

A familiar little smile creased Higgins’ face as he turned the subject matter to the future.

The past – at least the first six weeks of this season – has been a frustrating experience for him. The Browns are stumbling around at 2-4 and Higgins' is stalled with two catches in his career-changing contract year.

Higgins suffered a sprained MCL, he confirmed Tuesday, blocking on a lateral pass to Jarvis Landry on the third play of the season opener. Somebody fell on his left knee. Higgins stayed in the game long enough to set up the first touchdown of the Browns season on a 35-yard catch from Baker Mayfield.

The pain in the knee wouldn’t go away and he left that game after 32 snaps. And stayed out for Games 2, 3 and 4. He thought he would play in Game 5 against the 49ers, but wasn’t activated. He finally dressed for Game 6 v. Seattle, but never was put on the field.

Higgins spent the whole game next to receivers coach Adam Henry on the sideline holding his helmet, waiting for the call to go in that never came.

“Honestly, I just didn’t get in,” Higgins said, choosing words carefully. “I don’t know why. I was a little surprised.”

Coach Freddie Kitchens said Higgins wasn’t in his doghouse. When Higgins was asked if he felt he was, he responded, “What’s a doghouse?”

“At the end of the day, I didn’t get what I wanted. You feel me? I wanted to get in the game. I’m sure I’ll be in this game,” Higgins said.

Hooray for Hollywood: For two weeks, Kitchens had been cryptic in answering questions about Higgins, as if there were an underlying reason for keeping him out. On Tuesday, Kitchens was much more encouraging talking about Higgins.

“The reason Hig didn’t play was we were coming into a bye week and I thought he’d benefit greatly [from staying out one more week],” Kitchens said. “Nobody ever questions Hig’s heart and motivation and desire to win and desire to do things the right way. I’ll be glad when he’s back.”

So should Baker Mayfield.

You’d think a quarterback wouldn’t miss Higgins so much, what with Odell Beckham Jr. lining up on one side of the line and Jarvis Landry on the other. But in the never-ending search for clues to Mayfield’s slump-ridden second season, the absence of Higgins, his receiving security blanket, is an unavoidable talking point.

There is no question the chemistry between Mayfield and Higgins was strong from the start of Mayfield’s ascension to the starting job. That bond was formed when they shared third-team reps every day in the 2018 training camp.

“I think with Hig, it’s the comfort of knowing he’s going to be there where he needs to be,” Kitchens said. “And when you’re there, you’re catching the ball. I think Higs always kind of gives the quarterback – whoever it is – gives him that comfort level.”

Higgins said, “I feel I’m somebody that Baker can rely on, and when I’m in the game I can make a difference.

“There be days at practice, we’re trying to get timing down. I’m not the one. When he’s scrambling, he finds me. You feel me? So, I really don’t know … it’s one of those things.”

“He just has a little knack [for getting open],” receivers coach Adam Henry said. “He’s one of the guys who kind of finds little spots to get into in space. It’s kind of a law of attraction type thing.”

Going forward: Higgins has watched the offense and Mayfield struggle without him.

He said he hasn’t had any heart-to-heart talk with Mayfield about the downer season they’re both having.

“I know it can be a frustrating thing, getting sacked, throwing interceptions,” Higgins said. “So I don’t go up to him other than to say, ‘How you feeling?’ Instead of ‘How’s your arm?’ I’m not trying to be a negative teammate. I’m trying to uplift my teammates at the end of the day.

“I feel like I can bring a lot of confidence to the team, making the plays. Jarvis and Odell do what they do, [Antonio] Callaway as well. When we’re a team, I feel we’re clicking on all cylinders. We have to get to running, man. ASAP.

“I just know this offense needs me, so I’m doing all that it takes to get on the field. I should be out there next game.

“My chance is still gonna come. There’s better days ahead.”