Time Running Out? Browns Try To Turn Back The Clock In Denver 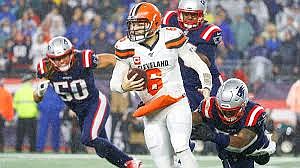 Baker Mayfield is frustrated with a three-game losing streak. (SI.com)

First down: Turn back the clock.

For teams that have not had their bye, this starts the second half of the season. For the Browns, it’s the restart of their season -- or the beginning of the end. It’s their choice. The schedule gauntlet has ended. The Browns won two of seven games against teams with a combined record of 37-17. Their remaining nine games come against teams with a record of 20-39-1. The Browns still have that 1-0 division record as their hole card. But their margin for error has been reduced considerably. Safe to say, they have to go 7-2 the rest of the way for a reasonable chance to win the AFC North, assuming five of those wins come against division rivals. If they go 7-2 with one of the losses coming to Baltimore, they could lose the division to the Ravens and be edged out for a playoff wild card. Going 6-3 and 8-8 overall will net them nothing more than a sausage and “atta boys” for trying, but coming up short. Last week, Jarvis Landry set the tone for the team by saying “we’re goin’ to win” coming off the bye. This week, Landry said, “I just think that now we are in this situation and we have to find a way to get out of whatever this is that we are in. Yes, this one is definitely important for us and to start to create the momentum to build for the rest of the schedule.” Definitely a change in tone there.

Joe Flacco, Denver’s regular starting quarterback, was a familiar foe to the Browns. With Flacco’s season over with a herniated disk, the Broncos are forced to start Brandon Allen, who has never appeared in – much less started – an NFL regular-season game. What to expect from Allen, who prepped for two years on the Rams’ practice squad before the Broncos signed him? Not even the Broncos know. “We have not seen a lot of him, either,” said Denver first-year coach Vic Fangio. “We picked him up after the last cut, and he only gets the few snaps a week with the first team offense. We put him in there with the scout team some, but we have not seen a lot either. We are all in the same boat.” Browns D-coordinator Steve Wilks opposed Allen in a 2017 preseason game. “Very smart,” Wilks said. “You can tell he does a good job at protecting the ball. He does not hold onto the ball. He gets rid of the ball. Very athletic out in space. He can buy time with his feet and very accurate with the ball, as well. I still think their approach is going to be – because they have two dynamic running backs – they are going to try to run the football and create the play-action off it, which I think they do a great job of.”

Given the season-long failings on the offense, even the Browns are looking to their defense to step up in Denver. Coach Freddie Kitchens delivered the message that his defense should not expect a walk in the park just because Allen has never played before. He cited a stat from his analytics department: in the last five years, quarterbacks making their first NFL start are 16-25-1, averaging about 60 percent completions and 200 yards passing. The other factor not to take lightly is that O-coordinator Rich Scangarello is trying to copy the offensive system of his mentor, Kyle Shanahan. We know the 49ers’ offense gashed the Browns’ defense in a 31-3 shellacking, which triggered a three-game Browns losing streak. “I could see some of the similarities in what they are doing, definitely in the run game,” Wilks said. “I know that is going to be a film that they are going to watch, and they have probably already had some conversations amongst one another. We definitely have to be prepared for some of the things that hurt us in that particular game.”

Baker Mayfield leads the NFL with 12 interceptions this year and has 15 over his last eight games. He has not had a game of throwing more touchdowns than interceptions since a romp against the Bengals on Dec. 23 (the stare-down of Hue Jackson). Mayfield’s frustration boiled over on Wednesday when he got upset with a line of questioning from a Browns media analyst (me) and made a mike-drop exit that went viral. Shortly afterwards, Mayfield posted on Twitter: “Everybody wants to hear the truth until they actually get it.... I am who I am and always have been. Don’t call it emotional when it’s convenient and then passion when it fits. I care about winning, so yeah I’m frustrated. If I was to act like it’s okay to lose, then y’all would say that I’ve gotten complacent. My sense of urgency is at an all time high. And if I offend anybody along the way... that’s too bad”