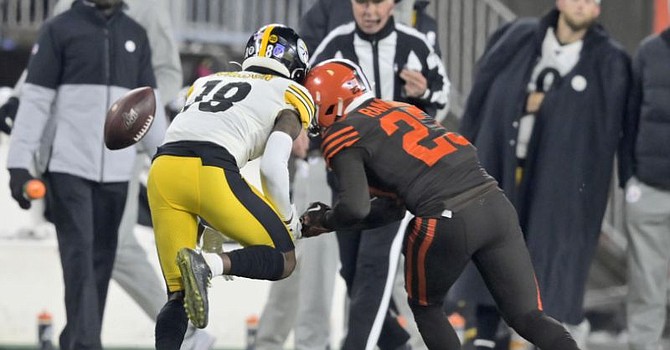 A week later, Browns defensive coordinator Steve Wilks defended his players from allegations of “targeting” Steelers receivers and disputed quarterback Mason Rudolph’s contention that a “late hit” by Myles Garrett precipitated the melee at the end of the game.

Pittsburgh receivers JuJu Smith-Schuster and Diontae Johnson were knocked out of the game with concussions on helmet hits by cornerback Greedy Williams and safety Damarious Randall, respectively. Williams was not penalized, though he may be fined. Randall was ejected and can expect a fine.

“I would say this, this is a physical football game,” Wilks said. “That is not my personality. That is not our personality as an organization. Things happen on the football field. Very unfortunate. I don’t think anything was malicious at all with the hit with Damarious. It just so happened he caught him in the wrong place. It’s not something we coach nor do we condone.”

Randall’s hit also drew blood from Johnson’s ear. Randall said on Wednesday that he apologized to Johnson after the game and was glad to hear Johnson is back practicing with the Steelers this week.

Smith-Schuster also injured his knee on the play on which he was concussed and is not expected to play Sunday in Cincinnati.

It’s ironic that Wilks would have to defend allegations of targeting. His predecessor, Gregg Williams, did not face scrutiny in two years with the Browns despite carrying the baggage of Bountygate from his time with the New Orleans Saints.

“I think it was just a bang-bang play,” Wilks said. “It’s nothing that we coach or teach. Split second, could he have turned his body either way? Maybe. I don’t know. Again, this is a very physical game. Things like that happen at times.”

As for the Garrett-Rudolph confrontation, Wilks initially declined to elaborate on the episode that resulted in Garrett whacking Rudolph in the head with his helmet after Rudolph aggressively tangled with Garrett on the ground, and then went after him after they were separated.

“I don’t think it was a late hit, at all,” Wilks said. “I think the activity that took place after that was inexcusable, on both sides, if you want to ask me. The extracurricular activity, we can’t have.”

2. How’s that tackle?: Wilks believes the defense’s aggressive tone was set on the first play of the game when Williams tackled running back James Conner for a 1-yard loss.

Williams earned a reputation at LSU of shying from tackling, and the Steelers sought to exploit that part of his game, Wilks indicated.

“We knew exactly what Pittsburgh was going to try to do. It showed on the first play of the game. They tried to make our corners tackle and [Williams] stepped up and made a tremendous play which set the tone,” Wilks said.

Including opponents, kickers have made 2 of 7 field goals and 10 of 14 PATs into the Dawg Pound.

“It is funny because you talk to [Browns kicking legend] Phil Dawson before the season, and I got a lot of information from Phil … he never gave me that indication that the Dawg Pound was that bad,” said special teams coordinator Mike Priefer. “But he did say once the ball gets up in the air, the winds do not always do what the flags are showing. I think that is what is happening.”

Priefer said that Seibert belted 12 of 12 kicks through the Dawg Pound goal posts on Wednesday.

“It was not that windy, but that gives him confidence going forward,” he said.

4. Brownie bits: If it looked like the Browns didn’t particularly add to the package of pony backs Nick Chubb and Kareem Hunt in the Pittsburgh game, it may have been due to the short week preparing for a Thursday game. “Some of that is true. You really only have so much you can do in a short week,” said Todd Monken, offensive coordinator. Now, after a long week, we may see even more options using the two backs against Miami …

Tight end David Njoku’s game status has not been established yet. Since Njoku has not been formally added to the active roster, he has not been subjected to the daily injury report. Suffice to say, he has not been a “full” participant in his two days on the practice field after nine weeks out. “David looked like he moved around good. Caught the ball well. We will see where he is,” said coach Freddie Kitchens …

Because of the unfortunate events resulting from the end of the Pittsburgh game, the release of receiver Antonio Callaway has been largely overshadowed. Kitchens’ first comment on that move: “Unfortunately, Antonio did not do the things that I or we expect out of him on and off the field. I like Antonio a lot. I wish nothing but the best for Antonio moving forward.”