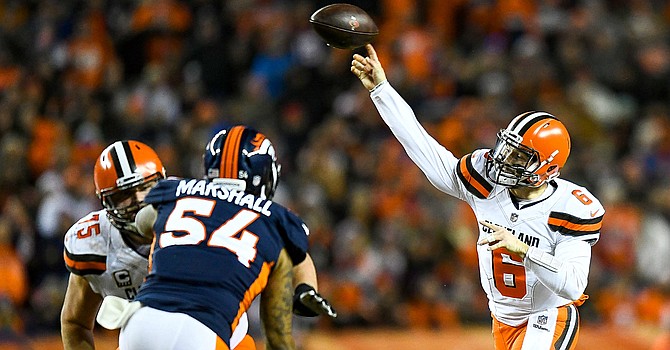 The last time the Browns played the Broncos, it was a Primetime thriller.

1.Needing a break, the Browns received a big one when quarterback Joe Flacco was shelved with a herniated disc. Flacco, who was 17-3 against the Browns as the Ravens franchise quarterback, will be placed on injured reserve. His replacement is Brandon Allen, who has never appeared in a game in 3 ½ seasons in the NFL. Allen was a sixth-round draft pick out of Arkansas for the Jaguars in 2016. He hung around the Rams practice squad for three seasons.

2.The Broncos chose Allen as their main backup over ex-Brown Kevin Hogan because of his familiarity with the offensive system run by coordinator Rich Scangarello. Scangarello was Kyle Shanahan’s quarterback coach two years with the 49ers. He tries to duplicate Shanahan’s zone-blocking run scheme and use predominantly play-action passing, often on bootlegs.

4.Edge rusher Von Miler (four sacks) has come on of late, but misses complementary rusher Bradley Chubb, who is out for the year with an ACL tear. Chubb’s replacement is Malik Reed, a 235-pound undrafted free agent from Nevada.

1.Broncos GM John Elway is receiving more heat than he ever did as the franchise’s iconic quarterback in the 1980s and 90s. Since luring Peyton Manning for a four-year post-season run that climaxed in the 2015 season Super Bowl championship, Elway’s teams have slumped to records of 9-7, 5-11, 6-10 and now 2-6. The 13-27 record over the last 40 games is the Broncos’ worst stretch since their 1966-68 AFL days.

2.Since Manning retired, Elway’s starting quarterbacks have been Kerry Siemian, Paxton Lynch, Brock Osweiler, Case Keenum, Flacco, and now Allen. Elway, who whiffed on picking Lynch in the first round in 2016, might have another draft bust in Drew Lock. The Missouri quarterback was taken by Elway in the second round after he seriously considered taking him in the first round. Lock has been on injured reserve with a thumb injury, but is eligible to come off. Lock was not impressive in preseason, but could get a trial run at the end of the season. In the meantime, the backup to Lock will be undrafted rookie Brett Rypien, who was promoted from the practice squad.

3.Elway’s future as GM is cloudy due to an ongoing ownership squabble. The team has been run by the Bowlen Family Trust since Hall of Fame owner Pat Bowlen was diagnosed with Alzheimer’s disease in 2009. Bowlen recently passed away and the Trust is seeking to groom daughter Brittany Bowlen, 29, as the next chief executive. However, the Trust is being sued by a daughter from Bowlen’s first marriage, leaving all ownership decisions in the hands of President Joe Ellis. Few expect Ellis, a long-time Bowlen loyalist, to fire Elway, though things are getting dicey for him.