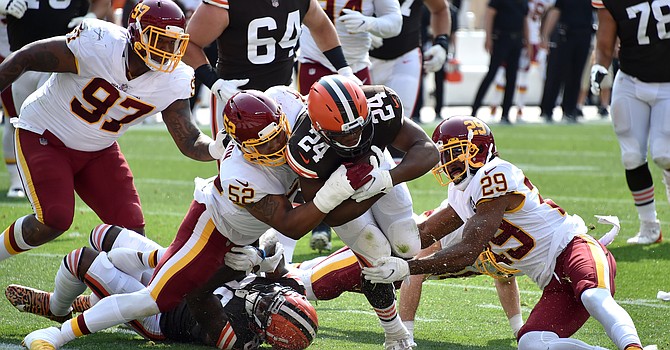 Nick Chubb muscles in for his first of two touchdowns during Browns' 34-20 win. (Jason Miller/Getty Images)

The latest sign of growth in the three-game-old era of the Kevin Stefanski Browns is a very encouraging one.

The Browns had a dog of a third quarter and fell behind the offensively-challenged Washington Football Team, 20-17.

But Stefanski didn’t lose sight of his team’s identity.

He kept dialing up Nick Chubb and Kareem Hunt on the ground and the defense harassed quarterback Dwayne Haskins into two late turnovers to collectively turn back Washington, 34-20.

“We are just trying to go 1-0 every week,” said Stefanski, who is sounding more and more like Bill Belichick.

He was able to manage an efficient performance out of Baker Mayfield (16 of 23 for 156 yards, two touchdowns, no interceptions). Mayfield snapped his league-high streak of eight games in a row with an interception with help from Odell Beckham Jr., who played defense on a 50-50 ball and knocked away an interception by safety Troy Apke in the second quarter.

“He did an unbelievable job knocking that ball down,” Mayfield said.

Beckham also had a clutch, 15-yard reception on third-and-12 from the Browns’ 23 that awoke the offense at the end of the third quarter. From there, it was Chubb and Hunt who set up a 3-yard Mayfield touchdown pass to rookie tight end Harrison Bryant.

After Haskins’ third interception of the day (two to linebackers and one to a safety), Beckham had another 15-yard catch to set up Chubb’s 20-yard touchdown around the left edge. The acceleration of the big back was breath-taking.

Chubb’s other touchdown in the first half was a vintage blast into the second level of the defense and then him smashing through four Washington defenders for a 16-yard score.

Chubb had 108 yards on 19 carries. Hunt had 46 yards on 16 carries, and 18 yards on two catches, one for a touchdown. So that’s pretty good balance using the heart-and-soul running backs.

Don’t expect the Browns to rush for over 200 yards all the time. To get 158 on 37 attempts against Washington is more impressive than the 215 it laid on the Bengals.

“We played a great team. The Washington Football Team has a great defense,” Chubb said. “We knew it was not going to be easy, but we take pride in those 2-yard dirty runs and those 0-yard dirty runs because we know it takes a toll on the team, and eventually, we will bust one. The whole game everybody kept telling me, ‘Just be patient. It is going to pop. It is going to pop.’ I think it worked for us.”

Washington was without franchise pass rusher Chase Young in the second half after he suffered a groin injury. But his counterpart on the other side, Montez Sweat, was having his way with Browns rookie left tackle Jedrick Wills, who committed false starts on the first two series and then was overpowered by Sweat in the third quarter.

“You can imagine what it would be like if we would have had a healthy Chase,” said Washington coach Ron Rivera.

“Offensively, we did not do anything moving the ball – three-and-out there,” Stefanski said of the third quarter. “That is not playing complementary football, so that was unfair to the team how we performed coming at halftime. Listen, this is the National Football League, and you are going to get some really good attacks. That is a talented group over there. We knew they were going to be able to make a few plays. We just want to limit them. Again, just the ball searching and the guys being around the ball was outstanding.”

Ultimately, Stefanski got his wish for “complementary” football.

Kicker Cody Parkey rescued the flagging special teams with a perfect game – 4 for 4 on PATs, 2 for 2 on field goals, and seven kickoffs blasted out of the end zone for touchbacks.

And the defense collected five takeaways – interceptions by safety Karl Joseph, linebackers Malcolm Smith and B.J. Goodson, another strip-sack and recovery by Myles Garrett, and a fumble recovery of back Antonio Gibson on the last play of the first half that only figured in inflating the takeaway-giveaway ratio to 5-0 on the day.

Garrett also had another sack, upping his season total to three in three games. His second recovery of his own forced fumble was exquisite; Garrett overpowered right tackle Morgan Moses to get to Haskins and then just plucked the ball out of his hands like it was his own.

So now, for the first time in their Browns careers, Mayfield and Garrett are leading a team over .500.

“I made that very clear to the guys,” Garrett said. “We have a chance that we have not had in a long time just to have a winning record, whether it is early or late. We have to take advantage of the opportunity. We have to start changing history here and our legacies right now. This is the opportunity to do it.”

Mayfield said, “First and foremost, this is a football town. They deserve to have a great franchise and a great team, but we are worried about right now. We have to build on this momentum and keep going one game at a time.”