Odell Beckham Jr. And Jarvis Landry Clear The Air And Renounce Reports Of Wanting Out 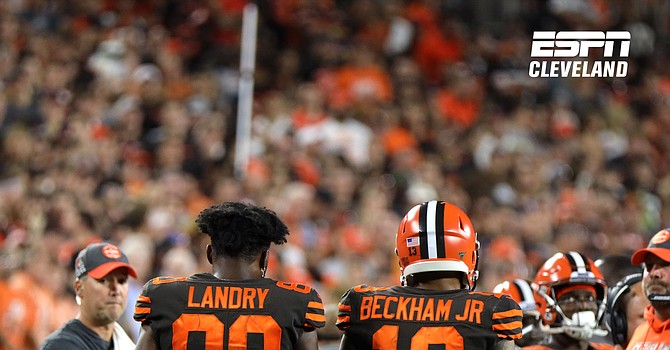 The two high-profile Browns receivers in the news cleared the air on Wednesday, and it served to release a tension that appeared to be bringing the Season of Unmet Great Expectations to a boil.

In separate appearances at the team’s locker room interview podium, first Odell Beckham Jr. and then Jarvis Landry renounced widening reports that each has asked opposing teams to “come get me.”

Beckham treated the reports light-heartedly at first, joking that he’s actually been talking to the CFL Winnipeg Blue Bombers and Toronto Argonauts, before turning serious.

Landry, however, was visibly upset that he was singled out in a report by NFL Media’s Michael Silver that he said to the Cardinals’ sideline “come get me” during the team’s 38-24 loss in Arizona.

“I would never say nothling like that. I don’t even want to talk about it,” said Landry, who a week ago was named the team’s Walter Payton NFL Man of the Year nominee.

“I didn’t feel like I had to address it,” Landry went on. “I think that the passion and the team I play for, that they trust and know in my heart and know that I’m in this. I would never look to another team during a game, especially that we’re losing, and say ‘Come get me.’ So Michael, or whoever the source was, it’s all about clicks now, and I get it. But at the end of the day, don’t try to slander my name. If you didn’t hear me say it directly, you shouldn’t have to be able to report about it.

“I would never, ever do that.”

In response to Tweets from Browns fans, Silver Tweeted, “I stand by my report and the multiple sources behind it. Thanks.”

Before Landry, Beckham had been the exclusive subject of reports asking out. Two weeks ago, he fell short of rebuking them, saying he didn’t know what the future held for him.

He went the extra mile on Wednesday.

“It’s just easy to talk about us,” he said. “It’s a copout. It’s an easy thing to do, cause a little controversy, a little friction. In my experiences in the league, going through the troubles that I did, I can now see how those stories … for me, it’s never going to affect me. But does it cause a little friction between you and a teammate who doesn’t necessarily know what you’re thinking?

“It’s just done. It’s time to put it to bed. I’m gonna be here,” he said, before joking, “Unless I go to the [CFL Toronto] Argonauts or [Winnipeg] Blue Bombers.”

Then came another jest.

“And I definitely, for sure, ain’t goin’ to the Steelers,” he said. “That would never happen. For sure.”

Beckham took a well-aimed shot at Giants GM Dave Gettleman, who had said in New York that he didn’t sign Beckham to a $90 million contract to trade him.

Beckham said he decided to be emphatic about his desire to stay when national reports “got to be too much.”

He said the reunion with Landry, his boyhood friend, has been too fulfilling to him to turn his back and leave for another team.

“We’re gonna be what we felt we should have been and correct all the little mistakes and all the’ if we woulda did this’ games. It’s just too good,” Beckham said.

Landry said the perception of uncertainty generated by the reports did not cause friction in the locker room, but he’s happy the stories can be put to bed.

“I mean, I think John [Dorsey] and Freddie [Kitchens], Dee and Jimmy [Haslam], everybody, already knew that,” Landry said. “I don’t know where it came from, don’t know who put that out.