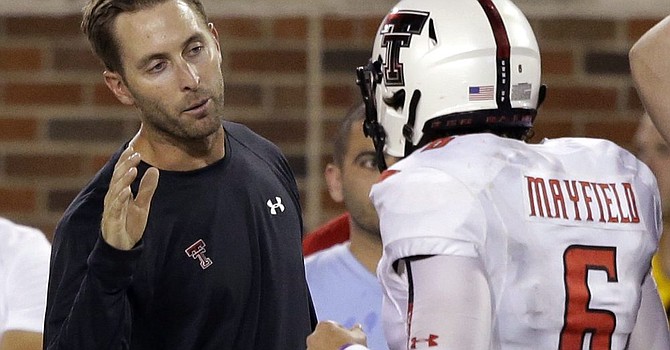 Baker Mayfield and Kliff Kingsbury have buried the hatchet since their differences at Texas Tech. (BrownsWire)

On the long list of slights kept by Baker Mayfield -- perceived or real -- the one involving current Arizona Cardinals coach Kliff Kingsbury is unique.

It’s the only one that apparently has been patched up.

Kingsbury was Mayfield’s first college coach at Texas Tech. After Mayfield ran off a 5-0 record as starting QB, he injured a knee and had to be replaced. Mayfield has said Kingsbury stopped communicating with Mayfield during the injury and then only put him back in when healthy because the other quarterback (Davis Webb) wasn’t winning.

Mayfield angrily transferred to Oklahoma, where he walked on and continued his legendary career, winning the Heisman Trophy and rising to No. 1 pick in the 2018 NFL draft.

“I think we’re in a good place,” Kingsbury said on a conference call. “What happened, happened. It was unfortunate. I honestly wish it would have been different and I could have handled things differently. But you move forward. I’ve been proud of his success. All he’s accomplished has been phenomenal to watch. It will be fun to go out with Kyler [Murray] and compete against him. It will be a heckuva matchup.”

Kingsbury remembered being “blown away” by Mayfield, as a true freshman and walk-on, being able to execute anything the coach installed “at a high level the first time doing it.”

Kingsbury said the hatchet was slowly buried over time by chance meetings at offseason football functions.

Left unsaid was the fact that Murray – Mayfield’s good friend and successor at Oklahoma – became Kingsbury’s No. 1 draft pick with Arizona and served as somewhat of a mediator in the adversarial relationship.

Mayfield lauded Kingsbury as “a brilliant offensive mind … players love playing for him, I know that.”

He joked, “We’ve both acknowledged an 18-year-old Baker wasn’t the all-knowing [person] that he thought he was.”

So if Kingsbury was the first name on Mayfield’s list of grudges, I asked the coach if he is surprised that Mayfield has continued adding names six years later.

“He’s really competitive,” Kingsbury said. “He’s been pretty much doubted his entire life. He’s used that as motivation and uses it successfully. I don’t really know why he’d change. I’m sure people are going to love you or hate you regardless of how you motivate yourself. But it works for him.”

The first fight in Mayfield’s career really turned out to be a draw.

“I think it worked out for them,” Mayfield said. “They got Pat Mahomes, and I think he’s doing fine now.”

Kingsbury recruited Mahomes, who took over for Webb, and produced gaudy offensive records, and enhanced Kingsbury’s reputation as an offensive guru, and led to him leaving Texas Tech for the Cardinals, and drafting Murray with the No. 1 pick in the 2019 draft.

Which leads to the reunion of all three in Arizona on Sunday.

“Kyler being involved makes it a fun one for us,” Mayfield said.

Moving forward: Mayfield and coach Freddie Kitchens believe all is well between Mayfield and the team’s medical staff after the incriminating comments Mayfield made Sunday in regards to Odell Beckham Jr.’s training camp injury.

Kitchens said on Monday that he spoke with Mayfield to let him know he was out of line. Mayfield issued an apology on Sunday. He said he had “conversations” in the team’s facility, but didn’t identify with whom he spoke.

“I had the conversations I needed to within our building,” Mayfield said. “The effect those words have in the bigger scheme, the bigger picture, were not my intentions.

“The people within our building know where I’m coming from. They know my frustration. If I was happy-go-lucky about everything, then we’d have a real problem on our hands. I talked to the people I needed to and so I’m confident in that and us moving forward.”

Hollywood mystery: You can argue that Rashard Higgins’ 7-yard touchdown catch with 1:44 left in the Buffalo game was the biggest play of the second half of the season. It stopped a four-game losing skid and sent the Browns on a 4-1 streak that has kept them alive in the race for the second AFC wild card.

It was Higgins’ only target in the Buffalo game in 33 offensive snaps.

The next week, the Browns released receiver Antonio Callaway. But if you thought all of that would return Higgins into the mainstream of the offense, you were wrong.

In the home win against Pittsburgh, Higgins had no targets in 28 offensive snaps.

The next week against Miami, Higgins had one target in 25 offensive snaps. He also had one snap on special teams.

The next week in the loss in Pittsburgh, Higgins had three targets in 29 offensive snaps.

And last week against Cincinnati, Higgins plummeted to the bottom of the stat sheet – one snap on special teams. He was on the hands team for the Bengals onside kick at the end.

Higgins glumly admitted, “It’s frustrating … real frustrating,” but declined to elaborate on what is going on.

“It is what it is, man. Whatever he says, gotta go with. He’s the head coach. I don’t want to put no backlash and have anything against me. I’m doing what he said. I just have to respect his decision,” Higgins said.

Considering the positive reviews earned by Kendall Lamm in replacing Hubbard last week, it’s possible he could make a second consecutive start – even if Hubbard were healthy to play, it sounds. “We will see where we are at the end of the week, but I am very pleased with the way Kendall competed,” Kitchens said. “He had not played football in [12] weeks. I want him to continue to get better and worry about the rest of that stuff on Sunday. I want him prepared to play.”