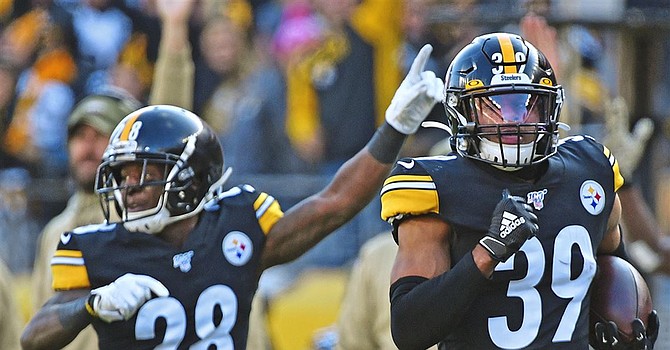 Minkah Fitzpatrick didn't make a play like this in the first Browns game. (Post-gazette.com)

The Steelers have won six of 11 games because of their defense.

Their offense is one of the most inept in their recent history – 28th overall in yards per game, 25th in rushing and 27th in passing.

On Sunday, they will attempt to beat the Browns in the game of the year for both teams with their No. 3 quarterback (Devlin “Duck” Hodges), their No. 3 running back (Bennie Snell) and their No. 2 center (B.J. Finney).

They are 25th in scoring only because three of their 22 touchdowns have been scored by their defense. Another seven touchdowns and six field goals were set up by defensive turnovers.

Prior to their Nov. 14 visit to Cleveland, the Steelers were on a 5-2 run primarily because of the play of safety Minkah Fitzpatrick. He had five interceptions, three fumbles recovered or forced, and two touchdowns coming into the game against the Browns.

“I don’t think I called his name once in that game,” said Browns radio play-by-play voice Jim Donovan. “He wasn’t a factor in the game at all.”

Fitzpatrick was credited with two tackle assists in the Browns’ 21-7 win – a game forever marked by the Myles Garrett meltdown against Mason Rudolph with eight seconds to go that resulted in a melee that produced three ejections, three suspensions, and over $800,000 in team and player fines.

What happened to Fitzpatrick in that game? How was he taken out by the Browns?

The answers to these questions could have a big bearing on Sunday’s rematch in Heinz Field.

“Probably a little schematics. I won’t give it away, all of it,” said Browns receiver Odell Beckham Jr.

Chess match: The Nov. 14 game was the second one in which the Browns employed their “Pony Express” tandem of running backs Nick Chubb and Kareem Hunt.

Since it was a short week, the Browns couldn’t incorporate much new stuff after the tandem’s debut five days earlier. Against the Steelers, Hunt lined up on 38 of the offense’s 70 snaps. He carried the ball six times for 12 yards rushing, and caught six of eight targets for 46 yards.

But by deploying Hunt in a variety of formations – in the backfield, as a slot receiver, as a wide receiver – the Browns were able to effectively neutralize Fitzpatrick’s role as a center fielder ballhawk.

“Not at all,” Steelers coach Mike Tomlin professed. “Some of the stuff, they did that when Duke [Johnson] was there, so, schematically, it is nothing new. So it did not change us structurally.”

Well, Duke Johnson is no Kareem Hunt. And, of course, Fitzpatrick never was in the Pittsburgh lineup against the Browns before. So Tomlin's response made no sense.

What was Tomlin’s explanation for Fitzpatrick’s disappearance in the Nov. 14 game?

“Minkah has a been a positive contributor to our efforts in a lot of ways, more than just the turnovers,” he answered. “He is just the same professional, good communicator and been a real good addition.”

Here is what Browns offensive coordinator Todd Monken said about Fitzpatrick’s total lack of impact in the Nov. 14 game:

“It is hard to imagine the streak that he had in terms of making plays, creating turnovers and scoring – like we talked about earlier about some of the penalties and turnovers, it being a week-to-week league and you do not anticipate that it is going to carry over – same there. He is going to go weeks where that does not happen and where the ball does not just fall his way or a fumble does not come his way.

“He is a good football player. He is certainly capable of making those game-changing plays. Whether [the deployment of Hunt] had something to do with it, sometimes the ability to run the football does that in not turning it over. Those are the plays he had making when the ball is in the air or the ball happened to be on the ground.”

Live by them, die by them: The Steelers are still second in the NFL with 28 turnovers. The only games they failed to produce a turnover, they lost – 33-3 to New England in Game 1, and 21-7 to the Browns in Game 10.

Obviously, if the Steelers don’t force a turnover, their chances of scoring – and winning – are severely reduced.

And if the Browns can manipulate Fitzpatrick’s positioning based on creative use of Chubb and Hunt together, it increases their chance of further neutralizing him.

“He is a guy that they give a lot of freedom to play,” Baker Mayfield said. “Just seeing formationally how we can mess around with them, see how they are playing it, yeah, but having both backs in there at the same time kind of makes them show their hand.”

Keeping Watt out of Mayfield's face is also important. The way to do that is the same for keeping Fitzpatrick at bay.

Use Chubb and Hunt. A lot.