With Big Ben Out Of The Way, Browns Have No Excuses In Must-Win Against Steelers 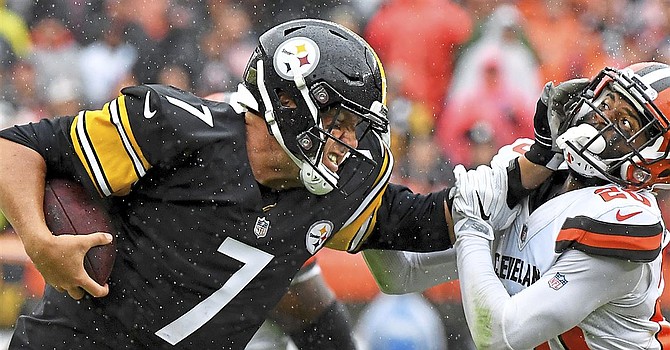 Big Ben won't be able to add to his 11-wins in Cleveland this Thursday.

It’s ridiculously early to be saying the Browns’ season rides on Game 10, but it’s true. It’s true because of ridiculous losses to this point – 43-13 to Tennessee, 20-14 to the Rams, 32-28 to Seattle, 24-19 to Denver. All along, the Browns’ hole card has been their 1-0 record in AFC North games – their flukish 40-25 win in Baltimore. So now comes their second division game against Pittsburgh – the beginning of the easiest remaining NFL schedule based on record. Because of their underperforming ways, the Browns must – must – win every division game to have a chance at the playoffs. “Everything is at stake,” said cornerback T.J. Carrie. “Yes, we have no more time to waste. This is a critical game and every game after this is going to be critical after this.” The Steelers come into town for a prime-time game with backup Mason Rudolph playing quarterback in place of Browns generational nemesis Ben Roethlisberger. Big Ben is 23-2-1 overall against the Browns and 11-2-1 in Cleveland, which still makes him the winningest quarterback in FirstEnergy Stadium. With Roethlisberger out for the year, what more do the Browns want? With so much on the line, there is no excuse for the Browns to lose this game on their home field. If they do, their season is over.

The Browns found their identity in their 19-16 win Sunday over the Buffalo Bills. It is operating the offense through running backs Nick Chubb and Kareem Hunt. Hunt’s lead-blocking in his first game after an NFL suspension was a revelation. It inspired Chubb to run for more than 8.5 yards per attempt – minus seven ill-conceived goal-line plays. Hunt also ran the ball four times and was targeted nine times in the passing game. The options in utilizing Chubb and Hunt together are endless. The obvious next step is to field them both in the backfield on goal-line or short-yardage situations, which have been a terrible bugaboo of the Browns all season. Chubb and Hunt can also be interchangeable as pass options for Baker Mayfield. Essentially, the Browns would be better off by funneling the offense through Chubb and Hunt rather than Odell Beckham Jr. and Jarvis Landry. It just might make Beckham and Landry more effective.

Third down: The other Watt.

In the last four meetings with the Steelers, the single most dominant force on defense has been edge rusher T.J. Watt, younger brother of J.J. Watt. In those four games, Watt has 31 tackles and seven sacks. Watt, who will line up mostly over Browns right tackle Chris Hubbard, leads the Steelers with 9.5 sacks, eight tackles for losses, 22 quarterback hurries and four forced fumbles, and is second with three fumble recoveries. While much of the credit for the Steelers’ turnaround after an 0-3 start deservedly has gone to safety Minkah Fitzpatrick (five interceptions, one forced fumble, one recovery, two touchdowns), Watt has consistently been a force in the Steelers forging a 3-0-1 record against the Browns in his time.

Fourth down: Time to win a game.

The Browns’ special teams have been a consistent high note in a season of disappointment so far. Rookies Austin Seibert and Jamie Gillan have been pleasant surprises and the Browns under new special teams coordinator Mike Priefer have reduced penalties and been good in returns and coverage. Footballoutsiders.com ranks them sixth overall in its convoluted special teams ratings system. One thing Priefer’s units haven’t done, though, is win a game. Priefer said earlier this season that a good year for special teams is to affect three or four games positively. It’s time for Priefer’s ‘teams to produce a win.