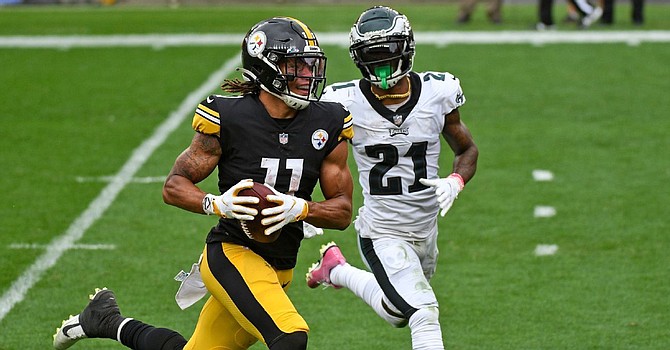 A breakout performance by rookie receiver Chase Claypool is expected to turn the Steelers into a pass-first offense in Ben Roethlisberger's 17th season. (ESPN.com)

1.Until they posted 39 points on the Eagles, the Steelers had gone 23 games without scoring 30 – longest drought in the NFL. Of course, they played the final 14 games last year with Mason Rudolph or Devlin (Duck) Hodges at quarterback in place of sore-elbowed Ben Roethlisberger. At 38, Roethlisberger has recovered nicely from major surgery. His 10 touchdowns-to-1 interception is the best ratio of his career through a season’s first four games. Three of those TDs last week were tossed to breakout rookie Chase Claypool, a towering second-round pick from Notre Dame. Claypool also scored on a 2-yard run, making him only the third rookie receiver in NFL history to score four touchdowns in a game. The Steelers can now line up five potential receivers for Roethlisberger on any given play – Claypool, JuJu Smith-Schuster, Diontae Johnson, James Washington and/or tight ends Eric Ebron and Vance McDonald.

2.Playing with leads in 14 of 16 quarters has enabled the Steelers’ pass rush to jump out to a fast start. The defense’s 20 sacks and 40 quarterback hits led the NFL through four games and paced ahead of its league-leading totals of 54 and 117 of a year ago. Edge rushers T.J. Watt (4.5 sacks) and Bud Dupree (3.0) might be the best pass rush tandem in the league today. Dupree, playing under the franchise tag, is motivated for a free agency payday in 2021. Watt has at least one sack in each of his six games against the Browns and nine overall. Dupree has 3.5 sacks in nine games against the Browns.

3.The Steelers’ blind spot in the draft for years has been at defensive backs. So to correct a weakness, they’ve loaded up on veterans, such as cornerbacks Joe Haden and Steve Nelson, and free safety Minkah Fitzpatrick. The lone draft pick in the starting lineup, strong safety Terrell Edmunds, was a first-round pick in 2018. Fitzpatrick had a huge impact after arriving via trade on Sept. 16, 2019 (five interceptions, two touchdowns, one forced fumble, two fumble recoveries), but was largely quiet in two games against the Browns. Haden leads the Steelers with nine interceptions since the Browns hand-delivered him to their rivals on the eve of the 2017 season opener. Haden has six pass breakups and two interceptions in six games against his former team.

4.Two of the Steelers’ best offensive linemen are injured. It appears that center Maurkice Pouncey (foot) will be limited in practice and will play on Sunday. But All-Pro right guard David DeCastro (abdominal) is expected to be replaced by rookie Kevin Dotson.

1.Findlay, OH-native and Miami (Ohio) product Ben Roethlisberger is 23-2-1 v. the Browns since they bypassed him in the 2004 draft for tight end Kellen Winslow Jr. That record includes one game in which he did not start but entered the game after the first series. With an 11-2-1 record in games in Cleveland, Roethlisberger was the winningest quarterback in FirstEnergy Stadium until Baker Mayfield matched his win total last week. Mayfield is 11-6 in Browns home games. Roethlisberger is 12-0 against the Browns in games in Heinz Field.