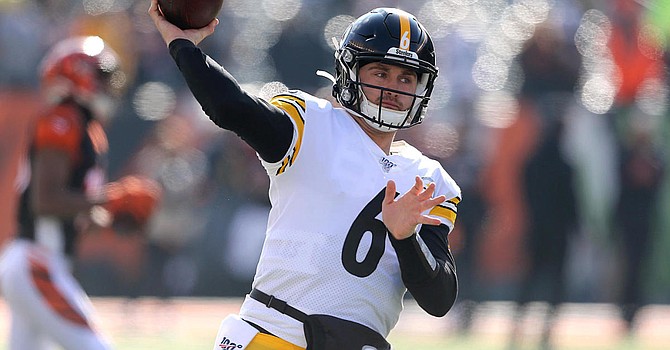 Devline (Duck) Hodges will start at quarterback ahead of Mason Rudolph. (CBSSports.com)

1.How many times have the Browns slinked into Heinz Field having to start their No. 3 quarterback against the Steelers? Now the shoe is on the other foot. Tomlin chose to name undrafted free agent Devlin Hodges the starter for a must-win game for the Steelers. He did so because Ben Roethlisberger understudy Mason Rudolph, a third-round pick in 2018, has been a mess since throwing four interceptions in the Nov. 14 loss to the Browns and instigating the game-ending melee. Tomlin put up with one more interception against the Bengals in the red zone, and then inserted Hodges, who sparked the win with a 79-yard touchdown pass to James Washington. Hodges made one start in Game 6 for Rudolph, who was out with a concussion, and produced a 24-17 win over the Chargers. Hodges, the all-time leading passer in FCS history from Samford, is a gunslinger who so far has managed to keep his turnovers to a minimum. That was a deciding factor in Tomlin’s decision. Hodges’ nickname is Duck because he won the Alabama state duck calling championship in 2018.

2.Tomlin said the demotion of Rudolph “means nothing about our intended plans for the foreseeable future or the trajectory of Mason's career.” Really? Rudolph was the sixth QB taken in the 2018 draft – Lamar Jackson was the fifth – and the Steelers traded up three spots in the third round to take him. With their season on the line, they have benched him. Rudolph has been rattled by the events of the Nov. 14 Browns game – inciting Myles Garrett, getting bopped with his own helmet by Garrett, causing the 2-game suspension of center Maurkice Pouncey, being accused in the Garrett appeals hearing of using a racial slur, incurring a $50,000 fine for unsportsmanlike conduct, and now being benched. It’s highly doubtful that Rudolph is the heir to Ben Roethlisberger’s throne.

3.Three integral offensive starters are unlikely to be available to Devlin. Pouncey is serving the second of his two-game suspension and is replaced by swingman B.J. Finney at center. Feature back James Conner is expected to miss another game with a shoulder injury. In his place last week, Tomlin took the unusual step of using four backs – rookie Bennie Snell, third-down back Jaylen Samuel, fullback Trey Edmunds and rookie Kerrith Whyte. Also expected out for the second straight game is No. 1 receiver JuJu Smith-Schuster (concussion, knee), who was knocked out of the Browns game on a helmet hit by Greedy Williams.

4.The Steelers haven’t made any lineup changes on defense since the Nov. 14 meeting. One thing they hope to correct is making safety Minkah Fitzpatrick more of a factor. It seemed like Fitzpatrick was schemed out of impact plays by the deployment of Kareem Hunt as a receiver in the first meeting. The Steelers also want left edge rusher T.J. Watt to keep Baker Mayfield from making plays while rolling to his right.

2.The Steelers’ 28 takeaways are second in the NFL to New England’s 29. The Steelers have had only two games without a takeaway – against New England in Game 1 and against the Browns in Game 10.

3.The Steelers have a record of 9-1 in games in which interior swingman B.J. Finney starts.

Small world: Cornerback Joe Haden was a Browns’ first-round draft pick in 2010 and played for them through 2016 … Offensive tackle Zach Banner played for the Browns in 2017 … Defensive coordinator Keith Butler was Browns linebackers coach 1999-02 … Assistant head coach John Mitchell was Browns defensive line coach 1991-91 … Offensive coordinator Randy Fichtner was born in Cleveland and is the son of former Browns defensive back Ross Fichtner … .Cornerback Justin Layne is a native of Cleveland and attended Benedictine High School.