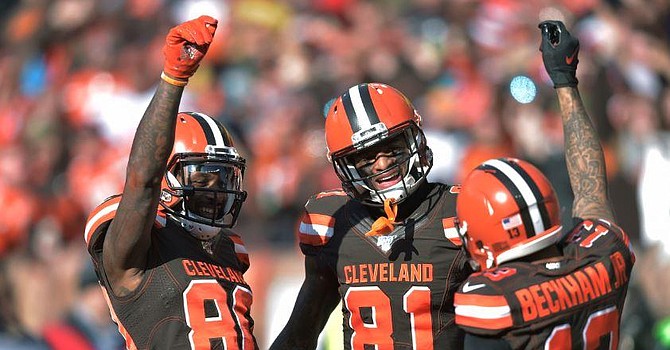 OBJ, Jarvis Landry (2), Kareem Hunt & Nick Chubb joined each other in the scoring column vs Miami.

They’re on to Pittsburgh.

Less than an hour after disposing of the Miami Dolphins JV team, 41-24, for their third win in a row, the Browns were fielding questions about the grudge rematch Sunday against the Steelers in Heinz Field.

Most didn’t know the Steelers beat the winless Bengals, 16-10, to stay one game in front of the Browns with a 6-5 record.

Most didn’t know that quarterback Mason Rudolph – the instigator of the brawl that resulted in Myles Garrett’s season-long suspension and over $800,000 in league fines – was benched early in the third quarter and probably will not get the call against the Browns.

“I don’t really care, ‘bro,” said Sheldon Richardson, Rudolph’s outspoken critic in the Browns’ locker room for over a week.

Without a follow-up, Richardson quickly added, “I hope he plays.”

“Did you see him last game?” Richardson replied.

Baker Mayfield, who passed for three touchdowns and 327 yards, said he didn’t really care what the Steelers did downstate in Cincinnati.

But when asked what he expected Sunday in Pittsburgh, Mayfield responded, “A playoff atmosphere. We’ll see what happens.”

“We had our job to do, and I will see the tape. I am not even playing directly against Mason. I will look at their defense and see what happened,” Mayfield added.

“Whoever they decide to go with, we’ll be ready to play,” said safety Damarious Randall. "We’re in playoff mode. Have been since we lost in Denver.”

From the depths of 2-6 after that 24-19 loss on Nov. 3, the Browns have climbed the ladder with three wins at home. They are 5-6 and are in good shape physically and mentally approaching the rematch in Pittsburgh.

Mayfield’s streak of 157 passes without an interception was broken on a short pass behind Odell Beckham Jr. in the third quarter. Mayfield also missed Rashard Higgins in the end zone, which resulted in a field goal.

But other than those -- and five penalties on offense (two declined), plus a botched snap when Mayfield wasn’t looking and a wayward pitch that botched a potential gadget play -- the offense was productive, if not efficient.

In racking up their highest point total of the season, the Browns got all their available high-profile playmakers in the end zone.

Jarvis Landry celebrated his 27th birthday four days early with two touchdowns (on 10 catches for 148 yards), Odell Beckham Jr. had one (on six for 84), Nick Chubb had one (on 106 yards on 21 rushes), and Kareem Hunt added his first in a Browns uniform (on a six-yard run).

It was the first game that Landry and Beckham both scored touchdowns since their LSU days.

“I think we made strides in certain areas offensively today that we needed to make,” Mayfield said.

“Making those plays in the red zone [they were four of five in TDs in the red zone]. Although we had the one to Higgins, if I give him a better ball and put it back on the back pylon, he gets a touchdown as well. When we got our chances, we capitalized. We still did not play nearly good enough, but we still scored 40 points.”

Miami (2-9) had a lot to do with that, of course. Despite their purposeful roster excavation, the Dolphins came in as the least-penalized team in the league. They committed eight penalties on defense (two declined), including four pass interferences. One was actually reversed from a non-call by the replay official in the final two minutes of the first half.

The Browns were able to build a 28-0 lead and then coasted.

The defensive line, shorted by three starters because of suspensions and one injury, held up fine, though it seemed a little gassed when the bearded one-time Browns nemesis, Ryan Fitzpatrick, went into pass-only mode in the third quarter and scored two touchdowns to complete a 17-0 Miami run.

Linebacker Joe Schobert’s second interception ended any chance of Fitzpatrick doing some magic to throw a scare into the Browns on this day. Schobert has four interceptions in the last two games.

“Obviously, there has been a little bit of a circus around here recently,” said Schobert, who is only the sixth linebacker in NFL history to have at lest two interceptions in consecutive games. “I think we did a good job.

“I think Freddie [Kitchens] did a great job of just making sure everybody gets hyper-focused on what we need to do. We have a game of football to play. We’re playing football on a football field. The stuff in the media and all the talking that happen throughout the week isn’t our job.

“We have to obviously deal with it because you have to get it out to the fans, but everybody could lock in and focus on the game. I think everybody did that and it showed on the field.”

Mayfield said, "I think we came together as a team."

And so it’s on to Pittsburgh, where a long-dormant rivalry is stoking like the coal-burning furnaces used to burn in the steel valley.

“Our guys will be ready to play,” Kitchens promised.

A stressful season just may have some fun in it, after all.