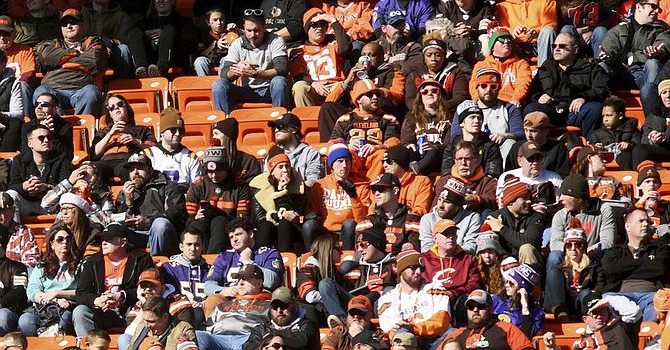 As they have all year, Browns fans showed up in droves to support yet another season of Great Unmet Expectations. (Star Beacon)

Three days before Christmas, on their last home game, the Browns sent their fans away for the cold, brutal winter with another losing season, their 12th in a row.

All the Browns had to do was hold a 6-0 lead over the Baltimore Ravens and they would be still alive another week in the playoff chase.

Three other teams did their part to help create a possible three-way tie for the final AFC playoff spot. Indianapolis won, Pittsburgh lost and Tennessee lost.

But not only did the Browns lose, 31-15, they caused their own demise with more incredibly bizarre decisions from the sideline.

We can’t help but bring to mind the words of Thurl Ravenscroft, who penned the lyrics of the Christmas classic, You’re a Mean One, Mr. Grinch.

The three words that best describe you are as follows, and I quote: Stink. Stank. Stunk!

The Browns turned a 6-0 lead at the two-minute mark of the first half into a 14-6 deficit at halftime.

They didn’t commit a turnover. They experienced temporary insanity.

They were third-and-1 at their own 28-yard line with 2:09 to go. Baker Mayfield lateraled the ball to Kareem Hunt, who was offset deep in the backfield and to Mayfield’s right. The play was supposed to be a halfback option pass. Hunt almost coughed up the ball and he was immediately met by three defenders for an 8-yard loss.

That was bad enough. But get this. Kitchens said if the play went awry with an incomplete pass, he intended to go for it on fourth-and-1. From his own 28.

“A couple of different things happened on that play that should not have happened, but I will just say it was an option pass and I should not have called it,” Kitchens continued. “It is one of those plays you try to call and you try to create some momentum. If it does not happen, you come back and get it on fourth-and-1, and we just lost some yardage.”

After the Browns’ punt, Ravens quarterback Lamar Jackson zipped two passes to make up the 63 yards for the go-ahead touchdown – 24 yards to Mark Ingram and 39 to Mark Andrews for the touchdown.

There was still 1:18 left when the Browns took over at their own 25. And wouldn’t you know it, they botched the next series to gift the Ravens another touchdown opportunity.

Mayfield threw the ball three times in a row, and each was deflected either in coverage or at the line of scrimmage. He consumed exactly 16 seconds before having to punt again.

Jackson took over at the Ravens’ 25 and slingshot his offense back into the end zone on five completions, the last a 14-yarder to Andrews beating Damarious Randall in the end zone again.

So the Ravens scored two touchdowns in 79 seconds to take over the game. Did we mention they did not even have a timeout left?

“Our goal on offense is to score points,” Mayfield said. “If one of those plays happens, nobody is asking questions. It didn’t go the way as planned. We just have to be able to play complementary football [read: play defense] at that point.”

What did Mayfield think when Kitchens had the brain fart to call that halfback option on third-and-1 from his own 28?

“We just have to block it up right,” he said. “That is a situation there where we are thinking about going for it if he does throw the ball and it’s incomplete. It is one of those where, since it didn’t work, everybody is mad. And if it worked, we are pure geniuses, stuff like that.”

Nobody has accused the Browns of genius status this year. Nobody.

The game was over at that point.

The Ravens scored on their first possession of the third quarter and all that was left to see was more zaniness from a team totally unglued.

Earlier, Odell Beckham Jr. was flagged for taunting for celebrating a catch with the Little Rascals’ wiggling fingers “hello” sign.

In the fourth quarter, defensive tackle Sheldon Richardson was slapped with an unsportsmanlike conduct penalty when he went to defend teammate Jarvis Redwine tangled up on the Baltimore sideline and didn’t heed the official’s command to leave the area.

After the penalty, Kitchens yanked Richardson from the field.

Richardson retreated to the sideline and tossed his helmet at the bench.

Asked if was frustrating to be benched by his coach after coming to the aid of a teammate, Richardson paused for a few seconds and said, “Next question.”

Beckham also flung his helmet after a short discussion with an official after scoring on a short fade pass in the right corner, only his third touchdown of the season.

The Ravens (13-2) clinched the No. 1 AFC playoff seed with their 11th win in a row. They didn’t look invincible in the first half, but Jackson finished with 238 yards passing and three touchdowns, and 103 yards running. He lost one fumble.

Until he put together a field-goal drive in the third quarter, Mayfield was averaging 4.4 yards per pass attempt. He finished with 192 yards and two touchdowns. One interceptions was erased by a Baltimore penalty and another by replay review.

So the Browns fell to 6-9 and the only thing left is a game in Cincinnati and a final verdict on Kitchens’ coaching future.

“Anytime you have a head coach and you have a losing record, that is the first person everyone points to,” Mayfield said. “But it goes to many more things than just Freddie.

“We can all be better in this process. I think that is what it comes down to is there is not one single thing to blame. Just overall, we all have to bring it more and more every day to meet the expectations we set for ourselves.”

There’s some truth in the comment about pointing to the coach. The Browns’ 12 straight losing seasons have been produced by seven different coaches.