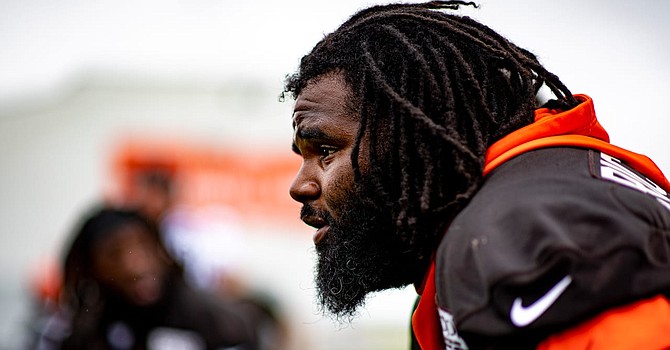 Sheldon Richardson looks to anchor a defensive line riddled with suspensions and injuries.

1. Blaming Rudolph: Myles Garrett will plead his case for a lesser suspension on Wednesday, and will do it in person, per Adam Schefter of ESPN.

Not many players wanted to comment on what provoked Garrett to rip the helmet off Pittsburgh quarterback Mason Rudolph and whack his unprotected head with it in the final seconds of Thursday night’s 21-7 Browns win. Tackle Sheldon Richardson was not shy in laying some blame on Rudolph.

“It’s not easy to push his buttons. Very hard to get underneath his skin. So for him to go off like that, something had to happen for him to overreact like that.”

Richardson said Rudolph should have received a suspension for instigating the melee.

“If you’re going to suspend [Garrett] indefinitely, I don’t know, a game or two [for Rudolph]? A game,” Richardson said. “Make it sound like you can’t be a quarterback and do as you please in this league. Have some consequences for your actions as well.

“I don’t blame [Steelers center Maurkice] Pouncey for protecting his quarterback [and kicking and punching Garrett on the ground]. I’d go overboard for my guys too. Ain’t nobody knocking him for that. That’s what football is, no matter how you try to hide it.”

2. More Garrett: Linebacker Joe Schobert said it was an emotional meeting on Friday when Garrett apologized to the team for his actions that resulted in his suspension for at least through the remainder of the season, pending appeal.

“If you know Myles, you understand he’s an even-keel guy,” Schobert said. “You could tell it was hurting him. At the same time, he’s not going to be around the team for a while. I think that’s one of the more important things in his life. So it’s definitely going to be hard for him to get through. As a team, we just have to let him know we’re behind him.

“I talked to him and told him we have his back and this shouldn’t define him for his career. He’s got a long time in the NFL ahead of him and I’m confident he’s going to turn this ship around.”

Garrett will not be allowed in the Browns building during his suspension. Richardson, who served suspensions of four weeks in 2015 (substance abuse violation) and one game in 2016 (personal conduct) while with the New York Jets, said some players prefer to remain in solitude during their suspension.

Coach Freddie Kitchens said the Browns will support Garrett during this time with whatever he needs.

“We do a lot of things within the organization to support our guys on and off the field,” Kitchens said. “Myles Garrett is a good person. He is a good individual. He does a lot in the community. He is a soft-spoken. We are not going to pile on Myles. He had a bad lapse in judgment, and that is it.

3. Moving on: Garrett is the Browns’ best defensive player, of course, fourth in the NFL with 10 sacks, and the defensive player who most affects offensive game-planning. But he’s not the only one who’ll be missing.

Tackle Larry Ogunjobi was suspended one game for decking Rudolph, pending his appeal that was heard on Monday. Safety Morgan Burnett (Achilles tendon) is out for the year. Safety Eric Murray (knee) is out indefinitely. And defensive end Olivier Vernon (knee) may not be available until late in the week, if at all.

Cornerback T.J. Carrie said Kitchens did a good job on Monday of focusing the team’s attention on moving on without their fallen starters.

“[Kitchens said] let’s not stay in this too long and allow this to affect more days ahead of us,” Carrie said. “Let’s know that what happened, happened. We can’t change it. Just grow from it and learn from it and understand everything’s right in front of us but it can be taken away like that.”

“There’s no way to replace the guys we’ve lost last game,” Carrie continued. “We have to have a tremendous amount of talented young guys come up and make some impact plays for us.”

Schobert said, “It’s similar to before the Rams game when we lost all four guys in the secondary. I think we did a good job of stepping up and this is going to be a lot of the same.”

Receiver Jarvis Landry denied the existence of a dark cloud over the team and the remainder of the season.

“We know this will take everybody we have now. We have to do it,” he said. “For us, it means we’re already starting next week. The league goes on and everything continues to move. We’ve been trying to pull it together for a couple weeks now. We’ve strung together a couple wins. We got to keep that up.”