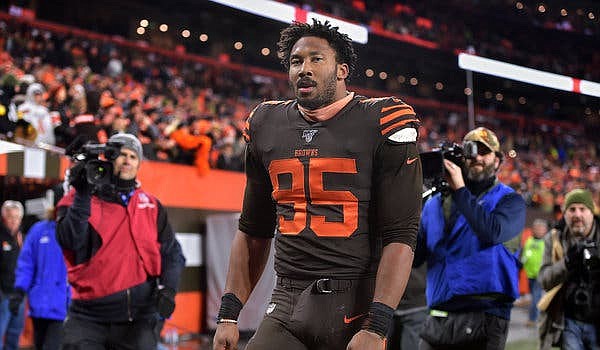 Myles Garrett's appeal was heard, and the NFL found "no evidence" of some of his claims.

Hours after the NFL said it “found no such evidence” of Myles Garrett’s claim that he was racially slurred by Pittsburgh’s Mason Rudolph, Garrett questioned the confidentiality of the NFL appeals process and repeated the accusation on Twitter.

ESPN reported that Garrett made the racial slur accusation during his appeals hearing in front of officer James Thrash on Wednesday. Rudolph's attorney vehemently denied it and wrote in a statement that Garrett's "lie" was "far worse than the physical assault witnessed on Thursday."

“I was assured that the hearing was space that afforded the opportunity to speak openly and honestly about the incident that led to my suspension. This was not meant for public dissemination, nor was it a convenient attempt to justify my actions or restore my image in the eyes of those I disappointed.

“I know what I heard. Whether my opponent’s comment was born out of frustration or ignorance, I cannot say. But his actions do not excuse my lack of restraint in the moment, and I truly regret the impact this has had on the league, the Browns and our devoted fans.”

Earlier in the day, hearing officer James Thrash upheld Garrett’s indefinite suspension for whacking Rudolph on his head with his helmet. Garrett was also fined $45,623. The suspension over the final six games also will cost Garrett $1,139,912 in game checks.

Coach Freddie Kitchens and Garrett’s teammates all have pledged their unwavering support for Garrett.

“As we’ve consistently stated, our organizational support for Myles will continue. He is a man of high character and unquestionable integrity. He was open and honest with us about the incident from the start. He has taken accountability for his actions on Thursday night and this situation will not define him. As an organization, our focus going forward remains on the task-at-hand, which is preparing for the Miami Dolphins.”