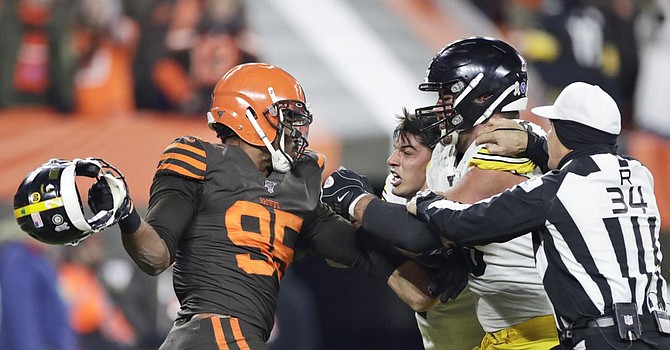 Myles Garrett faces lengthy suspension after losing his cool on the final play.

The Browns and Steelers have played 135 games since 1950 and none was as savage and brutal as the one Thursday night.

It ended in a melee after Myles Garrett lost control in an ugly skirmish with Pittsburgh quarterback Mason Rudolph with eight seconds left. After a late hit after a throw, Garrett yanked off Rudolph’s helmet and swung it against Rudolph’s unprotected head. As Rudolph turned to an official, he was decked from behind by Larry Ogunjobi.

This was far worse than Cleveland’s Joe (Turkey) Jones pile-driving Terry Bradshaw on his head in a game in 1976, or Pittsburgh’s James Harrison aiming his helmet into the head of Colt McCoy in a game in 2012.

Those were football acts that crossed the line of decent play.

There were a couple of those, also, in this game.

Safety Damarious Randall was ejected for a vicious helmet hit on Pittsburgh receiver Diontae Johnson that resulted in a concussion and blood spilling out of Johnson’s ear. Also, cornerback Greedy Williams knocked Pittsburgh receiver JuJu Smith-Schuster out of the game on a helmet hit that caused a concussion but did not result in a penalty. For the game, the Browns committed eight penalties for 121 yards.

But Garrett’s act was something nobody had ever seen before.

Oh, by the way, the Browns won, 21-7, to keep alive their season. They are 4-6 overall after their second win in a row and 2-0 in AFC North games for the first time since realignment in 2002. They have defeated Baltimore and Pittsburgh in the same season for the first time in their expansion era.

“It feels like we lost,” said quarterback Baker Mayfield. “It is going to take time for us to realize that we just won this game, even though it is very obvious on the scoreboard, but that is the tough part.”

The league will suspend Garrett, possibly as soon as Friday. The longest suspension of a player for an on-field act was five games to Tennessee’s Albert Haynesworth for stomping on the head of Dallas’ Andre Gurode in a 2006 game.

Asked how long he expected Garrett to be suspended, coach Freddie Kitchens said, “I’ve never seen that in my life. So we’ll see. We have to take whatever is given to us.”

Rudolph appeared to set off Garrett when he tried to pull Garrett’s helmet off with the two locked on the ground. It also looked like Rudolph tried to push off Garrett with his foot.

Pittsburgh center Maurkice Pouncey led a Steelers contingent to Rudolph’s defense and repeatedly kicked and punched Garrett on the ground.

Garrett, Ogunjobi and Pouncey were ejected with eight seconds left in the game. The Steelers and Browns each had one more snap before the game officially was declared over.

“I got sacked, we exchanged some words, he kept keeping on and one thing led to another,” Rudolph said. “You can go back and watch the tape if you want and make your own assumptions.”

Pittsburgh defensive lineman Cameron Heyward said, “We play this game. We all work for it. For someone to use a helmet as a weapon is uncalled for.”

Garrett said, “I made a mistake. I lost my cool, and it’s going to come back to hurt our team. The guys who jumped in to the scrum, I appreciate my team having my back, but it should have never got to that point. It’s on me.

“What I did was foolish, and I shouldn’t have allowed myself to slip like that. It’s out of character, but in a situation like that where it’s an emotional game … I allowed myself to fall into my emotions with the last play and what happened.”

Garrett said he would address the team on Friday. Although Garrett has been penalized this season for late hits on quarterbacks, his outburst was so out of character. During the team's bye week, Garrett turned the other cheek when a man posing as an autograph-seeker approached him in his car stopped at a traffic light and punched him in the face. Garrett reported that incident to the police but otherwise was unmoved by the provoked attack.

Kitchens was livid that the ending marred a critical victory for his team.

It was a victory in which the Browns intercepted Rudolph four times – twice by linebacker Joe Schobert – and sacked him four times. The offense did not commit a turnover against a Pittsburgh team that was second in the league with 26 takeaways, and Mayfield threw touchdowns to Jarvis Landry and undrafted rookie tight end Stephen Carlson, who picked the ball off the shoulder of defender Mark Barron in the end zone. Mayfield also scored a touchdown on a 1-yard sneak.

The incident, along with the helmet-to-helmet hits, and a previous ejection to Greg Robinson in Game 1, plus a rash of penalties throughout the season, intensified questions about the Browns’ lack of discipline under Kitchens.

After initially saying it didn’t feel like the Browns won, Mayfield put the victory in perspective.

“The win still means the same thing whether that happened or not,” he said. “[We’re] 2-0 in the division. We have stacked two wins together. The defense played great. The offense still struggled at times and sputtered out a little bit but made the plays when we needed. We showed improvement, but it is still not even close to being good enough offensively.”

The Browns get the weekend off after winning two games in five days. Then they host the Miami Dolphins next Sunday.

Then they travel to Pittsburgh on Dec. 1 for game two of the season series.

Asked if he was concerned about retaliation in the rematch, Mayfield said, “We will see. I am not going to worry too much about that. Have to move on and talk about the Dolphins now.”