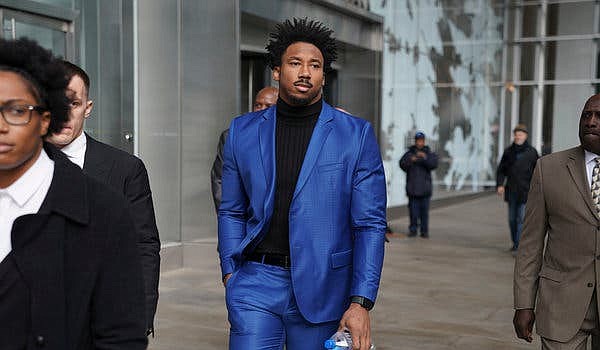 Myles Garrett's indefinite suspension is upheld, and he'll have to apply for reinstatement.

After ugly accusations flew between the camps of Myles Garrett and Mason Rudolph during the day, the NFL upheld Garrett’s indefinite suspension for whacking Rudolph on the head with his helmet at the end of Thursday’s game against the Pittsburgh Steelers.

It means Garrett will be suspended through the 2019 season and playoffs. He will have to meet with Commissioner Roger Goodell in the offseason before being reinstated for 2020.

Also, Pittsburgh center Maurkice Pouncey’s three-game suspension was reduced to two games. He will not be able to play in the teams’ rematch in Pittsburgh on Dec. 1.

The Garrett ruling by appeals officer James Thrash was made after ESPN reported that Garrett said in the hearing on Wednesday that Rudolph used a racial slur, which resulted in Garrett losing control of the situation.

The Rudolph camp responded by calling Garrett’s allegation “a lie” and “reckless and shameful.”

In a statement issued swiftly after the racial slur allegation became public, Rudolph lawyer Timothy M. Younger, said, “The malicious use of this wild and unfounded allegation is an assault on Mason’s integrity which is far worse than the physical assault witnessed on Thursday.”

In the Browns’ locker room, players reacted to hearing about Garrett’s allegation for the first time. Several read about it on their smartphones as reporters spread the news.

While none would say that Garrett had confided the racial slur to them in talks with the team, all said they supported him.

Tackle Sheldon Richardson, who has been the most outspoken player against Rudolph, said he believed Garrett’s allegation because a racial slur would explain Garrett’s actions.

“I wouldn’t doubt it. There had to be something to get him out of his body. That’s not Myles,” Richardson said.

“I know he wouldn’t lie about that. He’s kind of carefree type of guy. Something was said. If [Rudolph] said it, he got what’s coming. Period. And he should be suspended as well.”

Rudolph apologized for his actions and said he said nothing to escalate the situation. He was not suspended, but he is expected to be fined. League fines for participants in the melee are expected to be disclosed on Friday or Saturday.

Damarious Randall said he believed something beyond what was seen on video had to trigger Garrett’s fit of rage.

“Whenever I’ve seen his reaction, that was definitely out of his character,” he said. “It would obviously have to be something really really dramatic, really really out of the way for him to act like that.

“That’s why when I first heard reports about him hitting him, I was like, ‘There’s definitely going to be more to the story.’ People just don’t react like that for no reason.”

Joe Schobert said, “Myles is a calm, even-keeled guy. Something happened, but I can’t comment on what. I didn’t hear it.”

Odell Beckham Jr. said, “Since I met Myles, he’s been a very straightforward, honest person. He is what he appears to be. I just don’t see Myles as someone who would lie or do anything like that. We’re all kind of waiting and hoping justice will be served.”

Coach Freddie Kitchens probably spoke with Garrett more than anyone since the incident on Thursday night. He declined to say if Garrett disclosed he was motivated by a racial slur.

“What Myles and I talk about will stay between Myles and I,” Kitchens said. “I am sure that Myles presented himself professionally [in the appeal hearing] like he has done ever since the moment it happened afterwards. He has been nothing but professional in his responses.

“I can’t really comment on the arbitrator’s decision. We will respect his decision on whatever he decides, and I know Myles presented himself professionally to the arbitrator and the hearing. I stand by Myles, and that is not going to waver.”