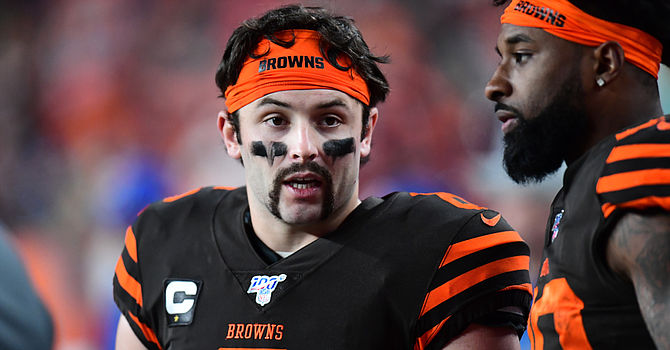 In an on-field interview, he told FOX’s Erin Andrews that Myles Garrett’s actions were “inexcusable” and “the reality is he’s going to get suspended.”

Mayfield said he talked with Garrett and Garrett does not feel that way.

“We talked about it afterwards. It was an emotional moment that’s unprecedented for us,” Mayfield said. “The things I said about it being inexcusable, that’s not to pile on to Myles, and he knows that. It’s about saying the standard in our game of football of protecting each other and then from there on, just setting a standard for us.”

He said he wouldn’t change what he said – “It feels like a loss.” -- if he had more time to reflect on the win versus the melee that marred the evening.

“I think that would have been the message if I was given some time,” Mayfield said. “I think the things that I said after the game about we were not good offensively enough, we played great defensively but we were talking about the wrong things because of some unfortunate events.

“No, I think the emotional part of it after the game is something that just happens. Our guys here know that I am going to have their back no matter what, and we know what we can and can’t do.”

Mayfield said he has talked to Garrett since the team meeting on Friday at which Garrett apologized to the team.

“Just seeing how he is doing,” Mayfield said. “I have been in that moment. It was a smaller scale in college – my Kansas mistake [of making a lewd gesture to the opponent because of a pre-game handshake snub]. When everybody else – you feel that weight of everybody crushing you, I wanted him to know that we have support for him and he can lean on us.”

As leader of the team and offensive captain, does Mayfield feel the Browns can rally around the loss of Garrett to a season-ending suspension?

“We will see come Sunday. We have to finish out this week, do our job each and every day and finish practice out,” he said.

2. Chief returns: Tight end David Njoku was cleared for practice and joined his teammates on the field for the first time since breaking his right wrist in Game 2 on Sept. 16.

In Njoku’s absence, the No. 1 tight end has been manned by Demetrius Harris or Ricky Seals-Jones. They’ve had their moments -- as did undrafted free agent Stephen Carlson picking the ball off the helmet of Mark Barron in the end zone on his first NFL catch – but the void of Njoku’s huge catch radius particularly in the red zone has been felt.

After missing nine weeks of practice, Njoku’s readiness to contribute in games is up in the air.

“He is getting more healthy so from that standpoint, that is all I know,” said Kitchens. “I do not know what kind of condition he is in. I do not know where he is at mentally. Sometimes you just have to put them out there and see how they do.”

Kitchens would not say if Njoku would be activated against Monday. Njoku originally did not want to have surgery on the wrist, but after consulting a specialist and family he opted to have a tiny screw implanted to accelerate healing. He feels he’s ready for game action.

“We have not made a decision on that,” Kitchens said before practice. “We have not even seen what he can do today so we will get him out there and see. If he can play two plays, that is not going to help us at all. We will see.”

3. Next (three) men up: With Garrett and tackle Larry Ogunjobi assuredly missing the Miami game with suspensions and end Olivier Vernon (knee) still not able to practice, the Browns will have three new starters on their defensive front. The lone regular will be tackle Sheldon Richardson.

Based on their official “unofficial” depth chart, the Browns will go with Chad Thomas at left end and Chris Smith at right end. Devaroe Lawrence will take Ogunjobi’s place at tackle next to Richardson.

The stress of the starters’ absence will be felt in the line’s rotation, of course. The only available backups are end Bryan Cox, who has not been activated since signing off the street on Nov. 11, and tackle Eli Andou, who has been active for two games since joining the Browns from the Jaguars’ practice squad.

4. Brownie bits: Garrett participated in his hearing in New York to appeal his indefinite suspension. The hearing reportedly lasted about two hours. Garrett was trying to get the suspension reduced and also for the indefinite nature be removed. Hearing officer James Thrash is expected to rule on Thursday …

Ogunjobi’s one-game suspension was upheld by Thrash, but his fine of $10,527 was rescinded.