How Kareem Hunt’S Comments About Questionable Team Effort In Arizona May Be Seen As A Positive, Not A Negative 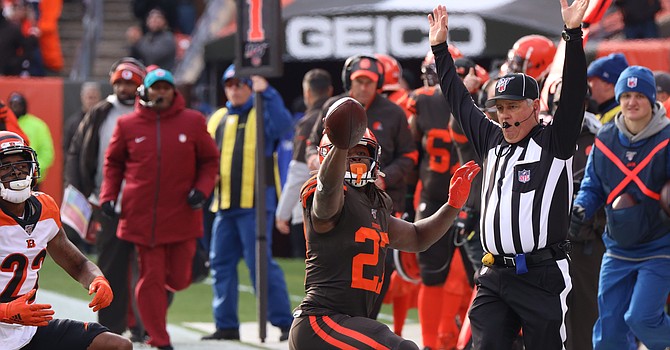 When running back Kareem Hunt questioned the Browns’ effort for failing to play “110 percent the whole play” in Arizona, some interpreted his comments to mean players were quitting on coach Freddie Kitchens.

Kitchens and quarterback Baker Mayfield don’t see it that way. Both viewed Hunt’s comments as constructive.

“He loves the game of football, and I do not think there is anything wrong with challenging your teammates,” Kitchens said.

Mayfield said he respected Hunt “a lot” for what he said.

“Kareem has been in a place in Kansas City that knows how to win, so his level and his standard of accountability for everybody to do their job is very high,” Mayfield said. “That is the type of guy you want to bring in here.

“I do not think it was anything personal to anybody, but Kareem, bringing him in was huge part for us raising the standards. We want that. We want guys to be able to have accountability. It does not need to just come from me all the time. Having a guy like that, and Nick Chubb is our silent assassin, so having Kareem being a vocal leader is important for us.”

Mayfield said Hunt’s message was no different from the one he has been preaching all year.

“Guys doing their job every single play,” he said. “It does not matter who we are playing or what the situation is – like we are saying, we have a lot of help on the outside to make the playoffs – you better be giving 100 percent effort each play. You better be doing your job without a doubt, doing the work during the week so you get out there on Sunday and you do not hesitate.

“That is where Kareem is coming from and I respect that a lot.”

Chubba Hubba Dub: Chubb’s Pro Bowl season really took off in Game 4 against Baltimore when he gashed the Ravens for season highs of 165 yards on the ground and three touchdowns, including one for 88 yards on which safety Earl Thomas submitted to rest a balky hamstring.

Granted, the Ravens were without top rush defender Brandon Williams, who was a late scratch, and they were having problems at inside linebacker and strong safety.

Only two other backs have topped 100 yards against the Ravens, Cincinnati’s Joe Mixon (114) and San Francisco’s Raheem Mostert (146).

Ravens coach John Harbaugh said when he ranked running backs in the 2017 draft, he had Chubb No. 1 because Saquon Barkley would be taken too high (No. 2 overall) for the Ravens to have any chance at him.

“I looked at all the guys besides Saquon, and Nick was my No. 1 guy,” Harbaugh said. “I checked that for the record, and I feel like he is proving me right. Hopefully, he will not do it on Sunday, and hopefully, we can be up to the challenge. He is a top-level back. Speed, elusiveness, power, hands and pass protection, he really does it all.”

Williams will be back for the rematch.

Yeah, sure: After the Browns racked up 40 points, 530 total yards and 193 on the ground in Game 4, they left Baltimore tied with the Ravens at 2-2 but technically in first place in the AFC North.

I asked Harbaugh if that 40-25 loss to the Browns was just a blip in the Ravens’ season or a season-changing event.

“It was probably neither of those descriptions,” he said unconvincingly. “It was a game that we did not play very well and we lost – that is the main thing. We did not play well. They played great and really put it to us. That is what it was.”

The offensive shellacking left the Ravens’ defense ranked 27th in the NFL. Since then, it is No. 1.

Thank you very little: I asked Mayfield if that 40-25 win against Baltimore was an example of the Browns reaching their potential, or was it merely a fluke.

He winced at the word choice.

“I would not say it is a fluke whatsoever – that is not very kind of you,” Mayfield said. “We have shown flashes where we could be great, but we were consistent that game. That is what football is all about.

“It is about putting all three phases of the ball – offense, defense and special teams – together. When you are on the road and start fast, which we did that game, and put them behind the chains, which our defense did, we had a lot of sacks, we won the turnover battle and we had more yards. It is just about being consistent, and we have not been as consistent as of recently.”