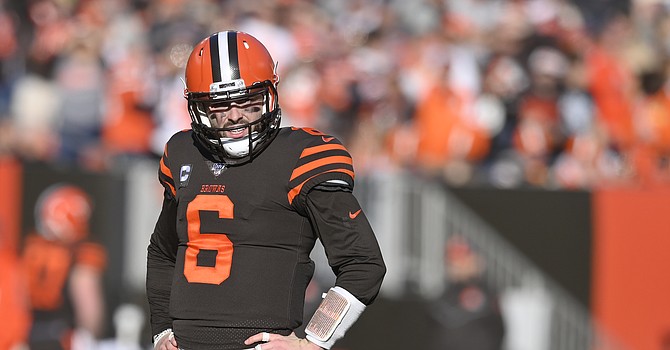 Baker Mayfield joins Aaron Rodgers, Russell Wilson and Derek Carr as the only quarterbacks to start every game for his team since Game 4 of 2018. (Associated Press)

Can you hear the music? It’s the NFL quarterback carousel spinning again.

The 49ers officially jumped on Friday by trading up to the No. 3 spot in the draft order. They will take a quarterback, and then possibly trade Jimmy Garoppolo. If they trade Garoppolo, odds are strong it will be to the Patriots, which means Bill Belichick could have a new quarterback in 2021, after all.

After Zack Wilson’s pro day performance on Friday, the clock is ticking on the Sam Darnold era with the Jets. They will now trade him to an undisclosed team, for which Darnold will be their starter in 2021.

Detroit, Washington, Indianapolis, Philadelphia, Chicago, New Orleans and the Rams already have committed to new starting quarterbacks. Jacksonville will get its franchise QB with the No. 1 pick in the draft. Carolina could find a new starter in the draft, too.

Then there is Houston, which may have no choice than to find a replacement for DeShaun Watson.

The NFL quarterback landscape is changing at an unprecedented, wild pace.

What’s amazing is the Browns now are one of the haves when it comes to quarterback stability. The team that had 30 different starting quarterbacks since 1999 now has had the same one for 45 consecutive games – 47 counting two post-season games.

In fact, since he took over in Game 4 of 2018, Baker Mayfield is one of only four quarterbacks in the NFL to start every game for his team. The others are Aaron Rodgers for Green Bay, Russell Wilson for Seattle and Derek Carr for the Raiders.

“The quarterback position is, in my mind, the most important position in professional sports,” Browns GM Andrew Berry said on March 3. “Until you have a baseline of any level of quarterback play, it is really difficult to win and make progress in the NFL. Oftentimes if that position is not productive or it is not solidified, it can feel a lot like operating in neutral. That is something that is certainly not lost on us and it is definitely not lost on us as an organization.”

Mayfield’s performance in his 47 career starts has been up and down and up. But one thing undeniably consistent has been his durability, which is one characteristic necessary for franchise quarterback status.

Unless something unforeseen happens, Mayfield in September will become the first quarterback in the Browns’ expansion era to start a season opener three years in a row.

And as the quarterback carousel spins all around the NFL, the Browns are in a place they haven’t been in 30 years.

Here is the list of starting quarterbacks per team since Mayfield took over for the Browns in Game 4 of 2018.