After A Fairy Tale Night In Pittsburgh, The Browns Say They’Re Not Satisfied 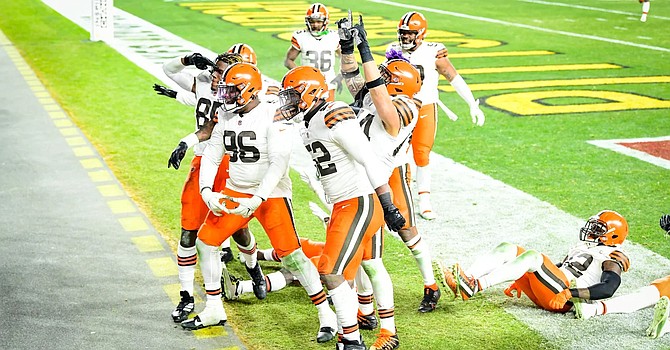 The Browns won their first playoff game in 26 years in a 48-37 thriller against the Steelers in Pittsburgh. (Matt Starkey/Cleveland Browns)

The odds were so stacked against the Browns in their AFC wild card game against the Pittsburgh Steelers that unbiased sympathizers chastised the NFL for refusing to postpone the contest.

It wasn’t that the Steelers were so much better a team, of course. It was the adversity that crippled the Browns during the week.

Covid-19 knocked out their head coach and two more assistant coaches, plus two key players to go along with two others still not ready to play.

The building was shut down by the NFL three times during the week and only on Friday did the team get on the practice field. One key player was driven to Pittsburgh in isolation so to not contract the virus en route.

Through it all, the Browns seemingly acquired a feeling of invincibility. That which doesn’t defeat them only makes them stronger.

“Soon as the Covid news hit, we knew everybody would count us out,” quarterback Baker Mayfield said. “It was ‘cut it loose and give it everything we had.’ No one believed in us besides us.”

So with head coach Kevin Stefanski watching the marquee, prime-time, NFL game of the weekend from his 60 in. HDTV in his basement – much like their legion of long-suffering fans – the Browns went out and produced a stunningly perfect execution of their long-time tormentors.

Gifted five Pittsburgh turnovers, including four Ben Roethlisberger interceptions, the Browns decked the Steelers with a 28-0 first quarter and then knocked them out of the playoffs in a franchise-cleansing, 48-37 humiliation in Heinz Field.

It sent the Browns into the second round of the AFC playoffs against the No. 1 seed and defending champion Kansas City Chiefs in Arrowhead Stadium on Sunday.

And it derailed 38-year-old quarterback Ben Roethlisberger from reaching one more Super Bowl before he hangs it up. He may get off the mat for one last try next year, but Roethlisberger had the look of a badly beaten, swollen-eyed champion after the Browns defeated him and his coach, Mike Tomlin, for the first time in Heinz Field.

Special teams coordinator and acting head coach Mike Priefer emerged from the locker room celebration, which included singing and dancing and Face-timing Stefanski and others who had to be left behind, and congratulated everyone, including the fans.

“I grew up as one of them, so I know what this means,” said the Cleveland native and former Navy helicopter pilot.

Which means Priefer felt the same pit in his stomach as Browns fans in the third quarter when Roethlisberger mounted a comeback with two touchdowns to shrink the Browns lead to 35-23 entering the fourth quarter.

“I could understand why people were probably a little bit nervous like, ‘Oh man, it is the Steelers and Browns and this rivalry,’” Priefer said. “No, I think in the third quarter, I was a little nervous, but I think the way our offense responded and then our defense responded well after that made everybody feel a heck of a lot better obviously.”

Mayfield had a flawless, mistake-free performance behind an offensive line that opened the game with Michael Dunn, a practice squad player who last started in the XFL in March, subbing for Pro Bowl left guard Joel Bitonio, then lost Pro Bowl right tackle Jack Conklin to a hamstring injury, and then, almost comically, lost Dunn to a calf injury in the middle of the fourth quarter. The game ended with someone named Blake Hance playing left guard, whom Mayfield said he literally met for the first time before the game.

Mayfield (21 of 34 for 263 yards, three touchdowns, no interceptions, 115.2 rating) gamely responded in the fourth quarter with a touchdown on a 40-yard catch-and-run by running back Nick Chubb and a Cody Parkey field goal. Mayfield converted third downs on both series with clutch completions.

The Browns also got touchdowns by Jarvis Landry (40 yards), two runs by Kareem Hunt, and a short catch by tight end Austin Hooper.

While the offense was not giving the ball away, the defense, depleted in its own right, was taking it away, and for that reason, coordinator Joe Woods had his finest moment with the Browns.

The first turnover was a gift on the game’s very first play – an airmailed shotgun snap by center Maurkice Pouncey that safety Karl Joseph recovered in the Pittsburgh end zone.

Such an ignominious start usually befalls the Browns against the Steelers and leads to a rout. That it laid the path for the Steelers' demise was poetic justice.

In the first quarter, Roethlisberger was intercepted by cornerback M.J. Stewart and safety Sheldrick Redwine; in the second by defensive end Porter Gustin on a pass deflected high in the air by tackle Vincent Taylor; and then in the fourth quarter by linebacker Sione Takitaki, who nailed the lid on Roethlisberger’s coffin.

The author of a 24-2-1 record against the Browns going into the game, Roethlisberger managed a fourth touchdown with 1:09 to go on his 68th pass of the night. He totaled 501 yards passing, but his four interceptions left him an old, defeated man, pondering his future at the age of 38.

“We definitely did not appreciate it,” said defensive end Myles Garrett, who notched his first victory against Roethlisberger in four meetings. “I think we made that known tonight with our performance.”

The Browns hope to get Stefanski and Bitonio back, among others, for Sunday’s second-round game against the Chiefs.

In the jubilant locker room, Stefanski spoke to Chubb and Hunt via Face Time.

“He told us how proud he is,” Hunt said. “He is a great coach and most definitely helped set the foundation here.”

Of the post-game celebration, Mayfield said, “The best thing about it was the mentality of everybody saying, ‘Hey, we did not just want to just win this game.’ Like I said last week, it is just the stepping stone to where we eventually want to go. For a lot of guys, it was a huge win – my first playoff win, for starters – but nobody here is satisfied yet.”

Who can doubt them now?