Browns Knock Out Steelers In One Of Franchise's Greatest Wins 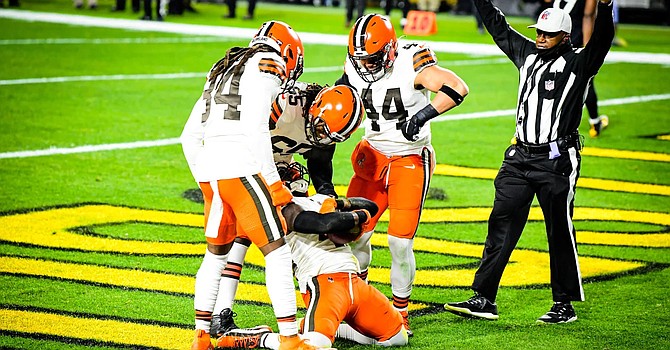 Karl Joseph scores on a fumble recovery in the end zone on the first play of the game to give the Browns an immediate lead. (Matt Starkey/Cleveland Browns)

1. History: Ding dong the witch is dead. The Browns knocked Ben Roethlisberger and Mike Tomlin out of the playoffs with their first-ever win in Heinz Field against the Steelers quarterback and head coach. With head coach Kevin Stefanski stricken with the coronavirus and watching from home, the Browns intercepted their franchise-nemesis four times in scoring one of their biggest triumphs in team history. They moved on to the second round of the AFC playoffs by blind-siding the Steelers, 48-37. The scoring spree started with a recovered errant snap in the end zone on the very first play of the game. The Browns’ first playoff win on the road since 1969 came in their first playoff game in 18 years. It also broke a 17-game losing streak in Heinz Field. The Browns, who were down to their last available offensive lineman in the fourth quarter after suffering two injuries, will play the AFC No. 1 seed Kansas City Chiefs in Arrowhead Stadium Sunday at 3:05 p.m. The Steelers exit with a 12-5 record after running off 11 straight wins to start the season. The Browns’ defense, missing two cornerbacks and a defensive end, turned in interceptions by cornerback M.J. Stewart, safety Sheldrick Redwine, defensive end Porter Gustin and linebacker Sione Takitaki. Takitaki’s came with 3:16 to go and led to a short field goal, effectively ending Pittsburgh's frantic comeback attempt. Roethlisberger tacked on another touchdown -- his fourth -- and surpassed 500 yards passing, but the Browns secured the win by recovering Pittsburgh's onside kick with 1:08 to go.

2. Nobody left: The Browns managed to pad their lead to 45-29 with a 24-yard field goal with 4:28 to play. On the series, left guard Michael Dunn left with a calf injury. In came the last offensive lineman available – Blake Hance. So the Browns were hanging on with Hance at left guard and Kendall Lamm at right tackle after a Jack Conklin hamstring injury earlier. Unbelievable.

3. This was huge: A touchdown on their first possession of the fourth quarter was a huge sigh of relief for the Browns. They had punted three possessions in a row as the Steelers started turning the screws. Mayfield made a big third-and-2 conversion with a completion off his back foot to Jarvis Landry for 17 yards. Three plays later, Nick Chubb received a short pass on a screen play, played off a JC Tretter and scampered 40 yards to the end zone. Cody Parkey’s PAT made it 42-23, Browns.

4. Too easy: Roethlisberger put the Steelers back in the game with two rapid-fire touchdowns in the third quarter as the Browns resorted to a season-long bugaboo – playing with a big lead. Ben completed 8 passes in a row on the first TD drive, getting the touchdown from 17 yards to tight end Eric Ebron over M.J. Stewart. Roethlisberger misfired on a two-point pass try. After the Browns accommodated with a three-and-out offensive series, Roethlisberger connected on 6 of 11 passes. Stewart again was beat on the touchdown from 5 yards to JuJu Smith-Schuster. The PAT closed what once was a 28-0 Browns lead to 35-23 with 2:57 left in the third quarter.

5. Make it stop: Roethlisberger needed only 1 minute, 24 seconds to respond with another touchdown with five completions in a row. One of them was regrettably challenged by acting coach Mike Priefer, which wasted a timeout. The touchdown came from 29 yards to Chase Claypool. But for the second time, Roethlisberger misfired on the two-point try as M.J. Stewart broke up his pass to keep the Browns lead at 42-30.

6. Catch your breath: The first half ended with a 49-yard field goal by Chris Boswell to cut the Browns lead to 35-10. When the Browns visited Heinz Field in October, the Steelers won, 35-7. So this was an unbelievable turnaround. The 35 points were an NFL record for points in the first half in a post-season game on the road. The Steelers committed four turnovers and the Browns scored touchdowns on three of them. They scored two more on their own for the big lead. But in the process, they lost right tackle Jack Conklin to a hamstring injury. It meant they had to play the rest of the game with two backups up front – Michael Dunn at left guard and Kendall Lamm at right tackle. And the Browns’ defense, which came out playing physical and aggressive, was out of rhythm when coordinator Joe Woods flipped on the “prevent” switch after a 28-0 lead.

7. What balance: The turnovers made the first half a breeze for acting play-caller Alex Van Pelt. For the half, the Browns had beautiful balance. Mayfield was 10 of 15 for 111 yards and touchdowns to Jarvis Landry (40 yards) and Austin Hooper (seven). The Browns rushed the ball 13 times for 103 yards. Nick Chubb had 53 on eight attempts, and Kareem Hunt had 44 yards and two touchdowns on four carries.

8. Never seen this: In their expansion history against the Steelers, the Browns were always the team to suffer some stupendous turnover to start the game and bury them in a hole – a botched punt, a pick 6, etc. This time it was the Steelers who brought their own backhoe. On the very first play from scrimmage from the 22-yard line, center Maurkice Pouncey’s shot gun snap airmailed Roethlisberger. Myles Garrett met the ball first inside the 2 and it squirted into the end zone. Karl Joseph fell on it for a Browns touchdown 14 seconds into the night.

9. Avalanche: The Browns preached turnovers all season and all week. After the first gift, Roethlisberger added two interceptions at 10:44 of the first quarter and at 3:18. On the first, Ben was pressured and tried to bloop the ball to back Benny Snell. M.J. Stewart snatched it for the pick. Three plays later, Mayfield hit Landry on a quick slant and Landry turned it into a 40-yard touchdown. On the second interception, Ben threw high for Diontae Johnson and safety Jarvis Redwine picked it. It only took the Browns three plays again for the touchdown, on Kareem Hunt’s 8-yard run around left end with center JC Tretter throwing the key block. So the Browns capitalized on three Pittsburgh turnovers for 21 points in the first quarter.

10. One more: Roethlisberger was intercepted for a third time with 10:11 to go in the second quarter. His pass was deflected high in the air at the line by tackle Vincent Taylor. End Porter Gustin jumped up to corral it at the Browns’ 47. The Browns didn’t capitalize on this one, as a drop by Hooper derailed the scoring chance. This was also the series on which Conklin suffered his hamstring injury, which looked like it could keep him out a while.The only lineman left on the bench was swingman Blake Hance.

11. Wake-up call: The Steelers didn’t score until 1:44 left in the half. Even then, they almost botched a fourth-and-1 from the 2. This time, Pouncey’s shotgun snap was low. Ben was able to hand off to James Conner. The Browns hit him short of the first down, but Conner’s second effort got him over the first-down marker. He scored the touchdown on the next play. With a 28-0 lead, the Browns dropped into a prevent defense and Ben chewed it up quickly.

12. Getting physical: With a 14-0 lead, the Browns got physical on offense. Chubb led off the possession with blasts of 17 and 20 yards. The first one was sprung on a block by Dunn, the second on one by right guard Wyatt Teller pulling to his left. Three plays later, Hunt powered into the end zone from 11 yards out. He dragged three Pittsburgh defenders over the goal line.

13. Pre-game notes: Browns coaches never identified their choice at left guard for Joel Bitonio during the week, but Landry let it slip that he was Dunn. Landry was right. Robert Jackson got his second consecutive start for Denzel Ward at cornerback. Conklin and cornerback Terrance Mitchell both started at their positions after being listed as questionable and missing the only practice of the week. Garrett was selected game captain for the second game in a row.