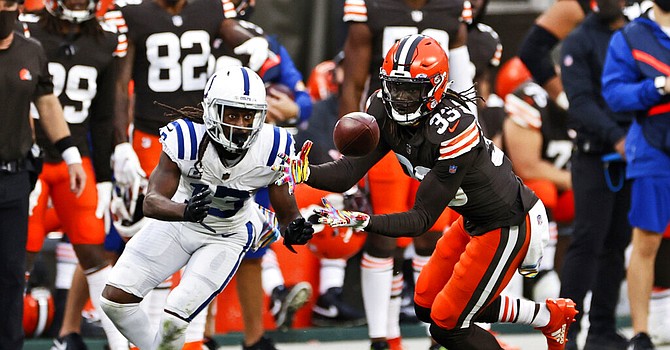 It’s on to Pittsburgh for the Browns for the next milepost in a season surpassing expectations by the week.

And not in a long while have they felt this good about their chances of ending their 16-year losing hex in Heinz Field.

They head into Pittsburgh to face the 4-0 Steelers with the momentum of their fourth win a row and a 4-1 record after outlasting the Indianapolis Colts, 32-23. It's their best start to a season since 1994.

The Browns traded blows with the No. 1-ranked defense in the NFL and stood tall at the end. The difference in the game was a Pick 6 by safety Ronnie Harrison and a safety awarded when Myles Garrett pressured Philip Rivers into intentional grounding from the end zone.

Those defensive plays were huge on a day that Baker Mayfield termed – with shortness of breath caused by sore ribs – “the worst game I’ve played of the five so far.”

Without franchise back Nick Chubb for the first of at least five games, the Browns’ running game stalled for much of the day. It caused coach Kevin Stefanski to put some additional trust in Mayfield. The results were mixed.

Mayfield had two good touchdown possessions in the first half. He was making the right reads, throwing accurately and his receivers came down with numerous contested catches. Mayfield built a 17-10 lead on touchdown throws to running back Kareem Hunt (two yards) and old faithful receiver Rashard Higgins (15).

But Mayfield started unraveling on the Browns’ last drive of the first half. He survived a dropped interception by cornerback Xavier Rhodes and posted an unsatisfying field goal for a 20-10 lead at halftime.

“We definitely should have had a touchdown instead of three points,” Mayfield said.

In the first half, Mayfield threw 28 times and completed 19 for 228 yards and the two touchdowns. And then the bottom dropped out of his game.

Harrison gave the Browns a 27-10 lead with an interception and 47-yard touchdown return on Rivers’ first possession of the second half. It was Harrison's first big play in a Browns uniform. He was subbing for strong safety Karl Joseph, who was inactive with a hamstring injury.

But the Colts responded immediately. Returner Isaiah Rodgers returned the ensuing kickoff 101 yards for a touchdown. It inspired the Colts' defense.

In the second half, Mayfield completed only 2 of 9 passes for 19 yards and was intercepted twice. It was the fourth game in a row in which Mayfield attempted fewer than 10 passes in the second half.

Mayfield was totally out of synch. He almost lost a fumble on a sack. He was intercepted by linebacker Bobby Okereke on a throw way short for tight end Austin Hooper. Then in the middle of the fourth quarter, Mayfield jammed his wrist when Okereke ran through a penalty flag and knocked him to the ground. Then on the very next play, Mayfield was crushed in the ribs by Justin Houston as he threw his second interception to linebacker Anthony Walker.

“I missed completions out there. Lot of guys were open,” Mayfield said. “I’ve got to get better. Good thing is we don’t have to learn from a loss. Two turnovers today. Not good enough.”

Stefanski said of the second half, “[The Colts] made some plays. [We] couldn’t get into rhythm. We did not rip any runs out of there. That is a very good defense. I think everybody knows that. We traded some body blows, but a credit to them for making life hard on us.”

The play of the day was turned in by, who else, Garrett.

The first of two uncharacteristic drops by Jarvis Landry led to a Browns’ punt. Jamie Gillan forced an Indianapolis fair catch at the 4-yard line.

On first down, Rivers dropped deep into the end zone and Garrett destroyed left tackle Le’Raven Clark, who was subbing for the injured Anthony Castonzo. Garrett was honing in on his second sack of the game when Rivers frantically winged the ball out of bounds. He was called for intentional grounding, awarding the Browns a safety and a 29-20 lead.

It was the fourth consecutive game in which Garrett made a game-changing play. The previous three were strip-sacks.

“The strip-sack streak has ended, but the streak that matters [winning] is still going,” Garrett said. “Definitely happy about that, and I am going to try to go out there and be disruptive as much as I can, but it is on those guys – the rest of the line, the linebackers and DBs – they have been balling. They are just allowing me to be effective by making them move the ball and get me freed up for some one on ones and I have just been able to come up and make the plays that I made.”

Reserve safety Sheldrick Redwine added an interception of Rivers, but the 39-year-old quarterback wouldn’t quit. Mayfield’s second interception resulted in a Colts field goal that cut the lead to 29-23 with 2:50 to go.

The way Mayfield was unraveling, and with Chubb home mending a knee injury, it was nervous time. But the offensive line, which had to replace right guard Wyatt Teller (calf injury) with Chris Hubbard, manned up when it mattered.

Hunt (72 yards on 20 attempts) ran for one first down, and then on third-and-9 from the Browns’ 43, Stefanski wouldn’t let Mayfield throw for the first down. Backup running back D’Ernest Johnson took the handoff and scampered around the left edge for a back-breaking 28-yard run and the first down.

“It was a hard-fought game,” Stefanski said. “We knew that it was going to be a physical game. I think that was a great team win. That was all about the team. It was not pretty at times. It was not perfect. Offensively, we did not put our defense in a great spot very often in that second half, but for us to come away with a pick-six and a safety was outstanding. A great team win.”

X-rays on Mayfield’s ribs were negative. He said he won’t miss Sunday’s game in Pittsburgh.

You can bet neither will Garrett. He is 0-2-1 against Roethlisberger and will be making his first visit to Heinz Field since he was suspended six games for knocking Mason Rudolph, Roethlisberger's replacement, on the head with his own helmet.