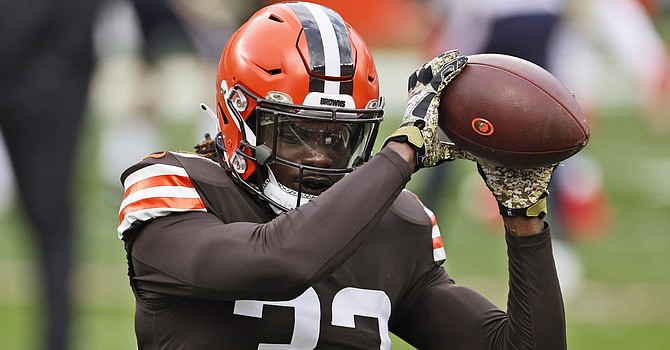 Safety Ronnie Harrison finally got back on the field last week after a four-game shoulder injury, and now he's out of the AFC wild card game after testing positive for Covid-19. (Florida Times Union)

The Browns are revolutionizing how to prepare for their AFC wild card game against the Pittsburgh Steelers. But not by choice.

They haven’t practiced a single time.

They were relegated to Zoom classes and virtual walk-throughs a second consecutive day when the NFL declined to open their facility.

By the end of the day, strong safety Ronnie Harrison, another important starting player, was ruled out when he tested positive for Covid-19. At the same time, free safety Andrew Sendejo, who missed last week’s game, was activated from Covid reserve.

Harrison brings the number of front-line players on Covid reserve to seven. The others are linebacker Malcolm Smith, tight end Harrison Bryant, cornerback Denzel Ward, cornerback Kevin Johnson, left guard Joel Bitonio, and receiver KhaDarel Hodge. Some may be activated before Sunday’s game, but nothing is certain.

Six members of the coaching staff are also sidelined by Covid, including head coach Kevin Stefanski.

But don’t think the NFL is wavering in its determination to play the playoff game in Heinz Field as scheduled at 8:15 Sunday night.

Responded Brian McCarthy, VP of NFL communications, in an email: “No change to the status of the game.”

In a Zoom conference, quarterback Baker Mayfield disclosed he has not thrown a football since Sunday’s Game 16 victory over the Steelers to qualify for the playoffs.

“It will not have an impact,” Mayfield said.

Commenting on the team not practicing, he added, “It is what it is. There are no excuses, but, luckily, we just played them last week so it is not like we are practicing against a whole new defense, essentially is what I am trying to get at. We have to be ready for the wrinkles, but luckily, we have game planned against these guys and everybody is sitting here in the second week in a row preparation for the Pittsburgh defense.”

Win one for the Gipper

Stefanski will not be able to attend the game in Pittsburgh or communicate with coaches or players from kickoff to the completion because of draconian rules that the NFL refuses to bend for the post-season.

So Stefanski can summon an inspirational pre-game speech. But acting head coach Mike Priefer wants to get in the last word.

“I am probably doing that. I will keep it short and sweet, I promise,” he said.

If Ward can’t make it back off Covid reserve in time to play, undrafted Robert Jackson will make his second start. Jackson was scorched on a number of deep balls by Mason Rudolph last game.

Jackson was beat for 41 yards by Diontae Johnson on a field goal drive and again by Johnson for 47 yards on a touchdown drive.

“When you look at it, he definitely could have been better technique-wise on a couple of those plays, and he was a half-step away from making those,” said Joe Woods, defensive coordinator. “Hopefully, he can make that jump this week because I think they are definitely going to target him.”

Woods thinks Johnson’s technique can be corrected, of course. But that’s difficult to do without time on the practice field.

“I am totally confident in Robert and have seen what he has done,” Woods said. “For him to go out in that game and the magnitude of that game, I felt like he did some good things, and some of the other things that he got beat on, we can get him a little bit better prepared technically to have some success.”

On a Zoom call, offensive coordinator Alex Van Pelt declined to say who would replace Joel Bitonio at left guard, but Landry let the cat out of the bag. Commenting on the team’s inspiration to win for Bitonio, the longest-tenured Brown, to be able to play next week in his first-ever playoff game, Landry said, That is definitely something that we all have in mind. “That is definitely something my man [Michael] Dunn is going to have in mind playing guard and giving it his best shot out there.” Dunn, 26, has never played in an NFL game. His last game of any kind came on March 7 with the Seattle Dragons of the XFL …

Van Pelt had a surprising answer when asked what’s the most important thing Stefanski does on game days. “The biggest thing I would say is he likes to have fun,” he said. “He keeps it light from the beginning to the end. He pokes fun at himself throughout the course of the game, and he is really calming. He is just always popping a dad joke out here and there, trying to keep the guys loose and light. It will be a challenge for us, but we will try to continue that. We are going to miss him.” …

Myles Garrett had no sacks or hits on Rudolph last Sunday as the Steelers occupied him with at least two blockers and also got the ball out of their quarterback’s hands quickly. Woods does not believe Garrett’s play still suffers from Covid after-effects. “I think Myles is fine, Woods said. “You have to give them credit. They did a nice job with their protection. At times, we were not able to get there and get close, and [Rudolph] was able to get rid of the ball fast. That is a dynamic of their offense, especially with Big Ben. Sometimes, it is catch and throw. If he is sitting back and throwing it deep, they will protect him at times. I just have to do a good job of combining man coverages and zone coverages and bringing some pressures just to create some one on ones for not only Myles but some of the other guys to put some pressure on Ben.”