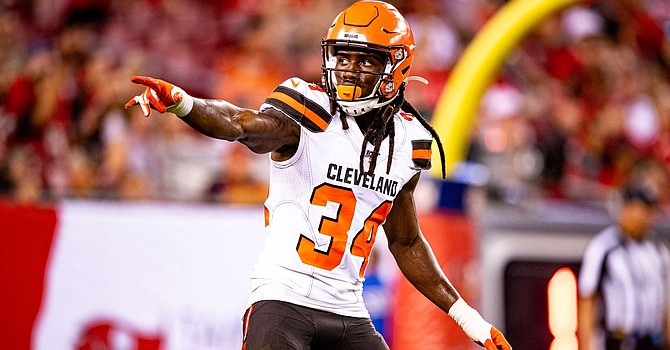 Reserve cornerback Robert Jackson had an adventurous afternoon against the Steelers' gifted receivers. The Browns have to decide how to improve their secondary with Ben Roethlisberger back in the saddle on Sunday. (Cleveland Browns)

It’s unusual for NFL teams to play the same opponent in consecutive weeks, but the Browns’ immediate rematch against the Steelers in a wild-card game is not unique.

Kevin Stefanski was assistant quarterbacks coach in 2012 when the Minnesota Vikings beat the division-rival Green Bay Packers, 37-34, in a win-to-get-in 16th game in Minnesota. The Vikings were ousted in the playoffs the next week in Green Bay, 24-10.

The Browns of Marty Schottenheimer had a similar experience to conclude the 1988 season. They beat the division-rival Houston Oilers in the 16th game in Cleveland, 28-23, to earn home-field advantange in a wild-card meeting the next week. Alas, Jerry Glanville’s Oilers prevailed in the rematch, 24-23, in what turned out to be Schottenheimer’s final game as Browns coach.

In both cases, though, the Packers and Oilers could not afford to rest regulars in the first meeting because the games were meaningful to them.

Not so for the Steelers, who rested their top performers on offense and defense -- quarterback Ben Roethlisberger and edge rusher T.J. Watt -- among nine in total.

So when the Browns begin preparations for the wild-card encounter in Heinz Field, they know they’ll be seeing a different Steelers team than the one that pridefully extended the Browns to the very end before losing, 24-22, on Sunday.

“I think we expected it to look different with the change in quarterback, and we expect it to look different again this week,” Stefanski said. “That is part of their job is to play to their players’ strengths. We understand that may change. It is our job to put ourselves in their building, think like them and try and get a feel for what they may do this week. That is what we are going to work hard on.”

The Browns had to make changes, too, of course, to account for missing six players on Covid-reserve. They also had limited practice time due to Covid protocol interruptions, which restricted their ability to fine-tune their scheme changes.

Stefanski tried to stay as vanilla as he could on offense because of the strong possibility of a rematch.

“I knew that was a distinct possibility,” he said.

Changes were more necessary on defense because of the Covid-related loss of linebackers B.J. Goodson and Malcolm Smith, safety Andrew Sendejo, and cornerbacks Denzel Ward and Kevin Johnson.

Stefanski doesn’t know what players he’ll get back for Sunday’s rematch, if any. But he knows he’ll have to change schemes to hope to defeat the Steelers’ varsity squad.

There are at least four issues Stefanski and his coaches have to address this week.

1. What to do about that secondary?

A practice-week audition resulted in coaches choosing Robert Jackson to fill Ward’s starting spot on the outside and M.J. Stewart taking Johnson’s role as the nickel back. Other options were special teams ace Tavierre Thomas and practice squad call-up A.J. Green.

Jackson wound up playing every snap on defense – 67 in all – after appearing on six defensive snaps total over the previous 15 games. Stewart played a season-high 63 snaps. Regular starter Terrance Mitchell also played the full 67 snaps.

The results were, um, mixed.

Stewart did make the game-changing interception and returned it 30 yards to set up the Browns’ last touchdown. And Jackson was all over Chase Claypool on Rudolph’s airmailed pass on the game-deciding 2-point try.

But, overall, Rudolph was 14 for 23 for 262 yards and two touchdowns targeting wideouts Claypool, JuJu Smith-Schuster and Dionte Johnson. Rudolph had three completions over 40 yards and two more over 25.

Claypool (6-4 and 238 pounds) and Schuster (6-1, 215) are imposing targets with tremendous ability to haul in 50-50 balls. Johnson wins with route-running when he isn’t dropping balls. The Pittsburgh offense now runs through the three receivers.

“Some of those big body wide receivers do a great job of trying to box people out,” Stefanski said. “It is a challenge, and we totally understand that and have to work real hard to go get those balls.

“[We] put Robert out there and he had a couple of tough matchups, but by and large, he was in position. A couple of things that we can clean up, but all of those guys, I am proud of them for stepping up to the challenge.”

Based on Stefanski’s body language on Monday, the prospects of getting back Ward or Johnson for the wild-card game seem unlikely. So Stefanski and coordinator Joe Woods have to configure a plan to defend better with Roethlisberger back at the helm.

“We will see how it goes and see how this week goes,” the coach said. “We do have options and you talk through all of those options and make sure you are putting a plan together that you think makes sense. We will do that again this week.”

2. How best to use running backs Nick Chubb and Kareem Hunt?

In Sunday’s game, Stefanski used a basic series-to-series rotation of the Dynamic Duo. Chubb was on the field for the first series, Hunt for the second, and they continued to alternate over the 10 offensive possessions.

Stefanski claimed, “That is what we do every game.” Not entirely true.

The coach did not remove Chubb for Hunt on third downs if it was Chubb’s series, and he did not put Chubb on the field at all on the 6 ½-minute drive in the fourth quarter when it was Hunt’s turn. Also, Hunt was not a factor in the passing game, targeted only one time for 4 yards.

Stefanski said his top priority Sunday was to keep Chubb and Hunt fresh for the playoff game. Be assured that the full package involving the two backs will be utilized, perhaps even a few plays with both on the field together.

3. How to manufacture a pass rush without blitzing?

Rudolph was sacked only one time and hit on only four others. He kept the Browns’ rush at bay with a quick-throw attack and took his vertical shots downfield when available. Myles Garrett seemed to be double- or triple-teamed on each of his 52 snaps.

The only sack was turned in by Olivier Vernon, who is now out with an Achilles tendon injury.

The most pressure applied came on Rudolph’s interception, when Woods sent linebackers Jacob Phillips and Sione Takitaki, and safety Ronnie Harrison. The Browns were lucky officials totally missed Harrison’s club to Rudolph’s helmet on the play.

CBS rules analyst Gene Steratore said referee Jerome Boger was screened from seeing the contact at the end of the play. “It would have been a foul if the referee had seen that action, for sure,” Steratore said on the broadcast.

Given the limitations in his secondary, Woods can’t afford to blitz more than a select few plays. And now he has lost Vernon, who had seven sacks and five additional quarterback hits over the past seven games.

The Browns also have to find a way to free up Garrett, who had no sacks or quarterback hits of Rudolph, but came close on at least two occasions.

4. How to create out-of-pocket passing opportunities for Baker Mayfield?

When the Steelers were at full strength defensively in the Game 6 meeting in Heinz Field, they totally took away the Browns’ play-action and bootleg passing game. Forced to operate inside the pocket, Mayfield was sacked four times and intercepted twice, including on his first pass for a Pick 6.

Since that meeting, edge rusher Bud Dupree was lost to a season-ending injury, as was replacement Robert Spillane. The Steelers are down to rookie Alex Highsmith on one side, but defensive player-of-the-year candidate Watt will be back for the wild-card game.

Stefanski purposely didn’t show much Mayfield play-action and bootleg passing on Sunday. As a result, Mayfield was sacked four times, but it seemed Mayfield held the ball rather than turn it over.

We know that Mayfield and Stefanski’s offense flourish when getting him outside the pocket on bootlegs and rollouts. For the Browns to be at full capacity on offense, they have to find a way to make those plays effective with Watt on the field.