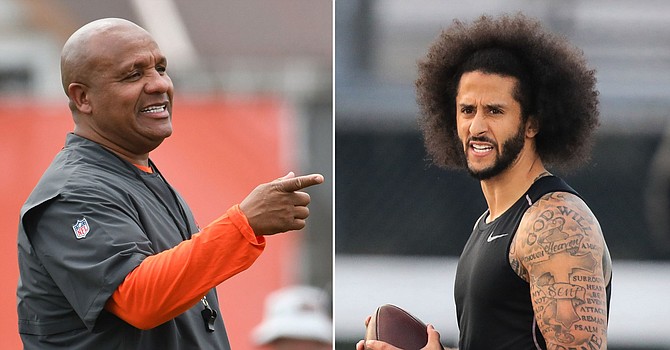 Hey Tony: Any sources that corroborate that Hue Jackson wanted Colin Kaepernick and either thought better about asking because he knew the answer or actually urged GM and/or ownership and was rejected?

Hey Jason: Jackson’s assertion in an interview on 850 ESPN Cleveland that he wanted to sign Kaepernick sent me to my archives. I went back and reviewed transcripts of Jackson interviews at the time. At the 2017 NFL Combine, Jackson was asked if he had any interest in pursuing Kaepernick. “We haven’t really discussed Colin,” he said. “There’s other players at this point that we’ve really had a lot of conversation about, seeing if we can put on our team. I’m not saying that it won’t come up later on. I think you have to exhaust everything you’re doing. But at this point, he hasn’t come up.I did like him when I was Oakland, there’s no question. I’m not saying that I don’t now. I just think the situation we’re in now, the players we’ve evaluated thus far, those are the guys we’re going to spend our time with first and foremost. If that doesn’t fall right, we know there’s other players to still evaluate.”

Two months later at the Browns charity golf outing in May, Jackson was asked if the topic of pursuing Kaepernick was “dead”? Jackson answered, “I won’t go there and say it’s the quarterback position [still to be added]. Because I think we have four bodies here. We drafted a guy [DeShone Kizer] we feel good about. I think that’s probably everywhere else. Now, I’m not shutting the door on Colin. I don’t want anybody to think that or we’re anti-Colin, that’s not the case. I think right now we have four guys that are vying for an opportunity to be our QB that we feel good about.”

Hey Tony: Who is the leading candidate to play right guard in this newly formatted, mobile offensive Line?

Hey Frank: When asked this question, O-line coach Bill Callahan responded, “That is up for grabs. I really believe we have some excellent players in there in Wyatt Teller, Drew Forbes, Colby Gossett and Willie Wright. There are a lot of candidates. There will be a lot of time for competition. I think that will sort itself out as we move along.” My hunch is that Teller will win the job.

Hey Tony: Amid the lack of minicamps and OTAs, how does a change in scheme affect the gap a rookie faces in unseating a veteran given the lack of practice time?

Hey Matt: I don’t want to overanalyze it other than to say that this unique offseason, with no physical work on the field in front of coaches, can result in anything. It’s impossible to handicap. The coaches haven’t even met their players face-to-face. Anything can happen.

Hey Tony: Are you nervous the Browns may not be in shape cardio wise?

Hey Tony: How many games will the Browns win this year?

Hey Tony: In a few months Kevin Stefanski has shown more leadership than most coaches I can remember. Does he get a pass on this season?

Hey Jon: Yes. I’m impressed with what I see, but he really has been dealt a bad hand with the lack of field work. It is undisputed that the current conditions place a greater burden on first-year coaches, especially those who’ve never been head coach at any level.

Hey Tony: Can you touch on what it was like covering the 1995 Browns and can you set the stage and describe the scene of the final game at Cleveland Municipal Stadium vs. the Bengals?

Hey Giovanni: 1995 was the worst year covering the Browns. Yes, worse than covering the 0-16 season in 2017. Once Art Modell’s intentions became public, advertisers pulled their support of the Browns and signage in Cleveland Stadium was covered in black plastic. The place looked like a war zone every Sunday. Fans were in a foul mood every game. The last home game against the Bengals was so surreal. I remember Bengals President Mike Brown actually brimming with pride at the passion shown by Browns fans knowing that passion was rooted in his father’s creation in 1946. I don’t think Brown was bothered by the fact his team was defeated by the Browns in that last game. After the Browns won, the images of Browns players Earnest Byner and Steve Everitt and others hugging fans in the Dawg Pound and fans not letting them go are still vivid. The following week, the Browns concluded the season with a 24-21 loss in Jacksonville on Christmas Eve. After filing stories, Cleveland media left the stadium as a group to get a meal. Everything was closed. We found a restaurant closing up and pleaded for something to eat. I felt like Tiny Tim: “Please, sir, it’s Christmas Eve and we’re hungry.”

Hey Tony: Inside linebacker Jake Ryan was waived by Baltimore. Probably because they drafted two players early at the same position. Any chance the Browns move to add him?

Hey Blair: I think the Browns’ roster is 98 percent set. Maybe one more player might be added. Is it Ryan? I doubt it.

Hey Tony: What will we talk about if the Browns are truly not a dysfunctional mess anymore like the last 21 seasons?