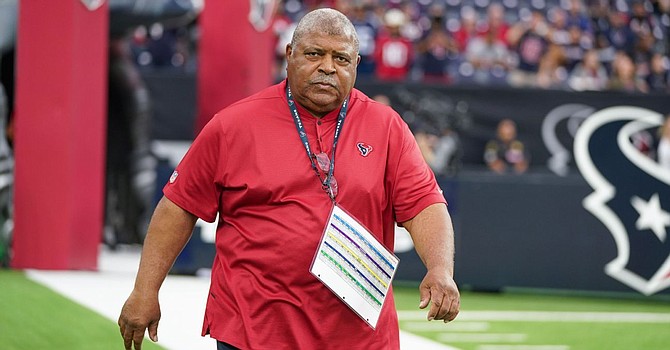 Romeo Crennel, 73, the oldest coach to win an NFL game, returns to Cleveland as interim coach of the Houston Texans (ESPN.com)

1.Quarterback DeShaun Watson, the 12th pick of the 2017 draft after Houston traded up with the Browns, is on pace to shatter personal highs across the board. If you double his eight-game totals this year, he’d throw for 4,752 yards, 34 touchdowns v. 10 interceptions, and a passer rating of 108.7. In 33-17 and 29-13 victories over the Browns, Watson has four TDs, no INT and a passer rating of 102.7. With no running game to speak of, Watson was the team’s leading rusher last week (50 yards, 10 attempts) and is second overall on the team with 197 rushing yards and a 4.9-yard average.

2.Watson has been unflappable his entire life and football career, and that trait helped him again this season after the Texans traded No. 1 receiver DeAndre Hopkins. Watson has responded with his best season statistically. Will Fuller (590 yards, six TDs) and Brandin Cooks (510, three) are on pace to become the first pair of Texans receivers to surpass 1,000-yards in the same season. Slot receiver Randall Cobb (33, 393, two) has as many receptions as Browns leader Jarvis Landry.

3.The Texans may be the worst tackling team in the NFL. Their defense against the run was solid in 2018 (82.0 yards per game) and the first eight games in 2019 (84.0). Since the middle of last season, it has been inexplicably bad (165.0 yards per game). Things are so bad that defensive coordinator Anthony Weaver abandoned his 3-4 scheme and moved to a 4-3 front on early downs. The problem is other than the venerable J.J. Watt, the other three starters are lacking.

4.With lead back David Johnson out with a concussion, ex-Brown Duke Johnson figures to get his first start since traded to the Texans in 2019 for what became a third-round draft pick (linebacker Jacob Phillips). Johnson averaged 4.9 yards per rush last year in his usual third-down back role. His average is 2.8 this year, which reflects the Texans’ major offensive weakness at the interior of their offensive line.

1.Old friend Romeo Crennel, 73, became the oldest head coach in NFL history when he was named interim coach when Bill O’Brien was fired after an 0-4 start. Crennel won his debut, marking the second time he won his debut as an interim coach. He did it with the Chiefs in 2011 and earned the full-time job in 2012. Crennel’s future in Houston is uncertain, but he has said he wants to keep coaching.

3.The fate of Texans’ franchise iconic pass rusher J.J. Watt, a three-time NFL defensive player-of-the-year, is believed to be up to him. Once a new general manager is hired, the Texans will gauge Watt’s interest in staying. If he wants to stay, he may get an extension to reduce his cap number – unless the new GM wants to try to recoup the first- and second-round picks that O’Brien traded to Miami for left tackle Laremy Tunsil. Incidentally, Watt is 3-0 v. the Browns. In those games, Watt has a sack, one forced fumble, two rumble recoveries, a pass defensed, and a touchdown on a 6-yard pass when lined up as a tight end.

4.The Texans intend to hire a GM before hiring a full-time coach. Interim GM Jack Easterby is in play for the permanent job. Easterby, 37, a former “character coach” under Bill Belichick with the Patriots, is close to Watson’s college coach at Clemson, Dabo Swinney. However, the prospect of Swinney reuniting with Watson is considered fantasy more than reality.