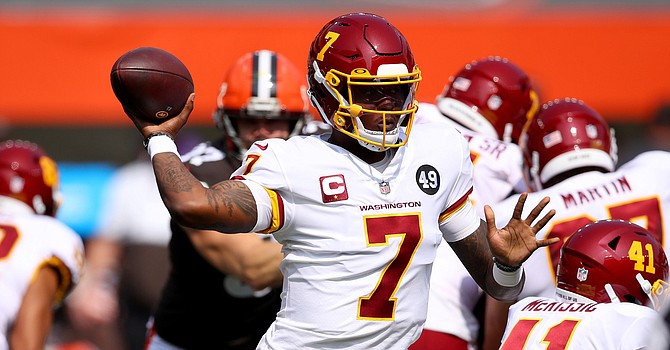 1. A win is a win: It’s going to take a while to characterize a Browns win as really impressive. They couldn’t shake the Washington Football Team for three quarters even after the Dept. of Defense lost franchise pass rusher Chase Young early in the second quarter. But Nick Chubb and Kareem Hunt were there when the offense needed them and Washington quarterback Dwayne Haskins contributed three interceptions and a lost fumble on a strip-sack and recovery by Myles Garrett. Ultimately, the 34-20 Browns’ win looked real good on the scoreboard. The win made the Browns a 2-1 football team, pushing them above .500 for the first time since December of 2014. With their defense still banged up, the Browns were able to shake off rust from some returning players to prepare for more lethal offenses over the next three weeks.

2. Chubba hubba: Chubb maintained his 6-yard rushing average with a 108-yard day on 19 carries. His two touchdown runs were vintage Chubb. On the first of 16 yards, he exploded to the second level and then broke about four tackles inside the 5. On the second, Chubb burst around the left edge and was gone for a 20-yard score. Hunt added 64 yards and one touchdown catch on 18 touches. All of which kept quarterback Baker Mayfield under the 30 pass barrier. Mayfield was an efficient 16 of 23 for 156 and two touchdowns (Hunt and rookie tight end Harrison Bryant).

3. Perfection: Big day for Browns kicker Cody Parkey. He was perfect on six kicks (four PATs and two field goals) and booted all six of his kickoffs out of the end zone for touchbacks.

4. Halftime adjustments: Washington dominated the third quarter, scoring two touchdowns and holding the Browns to 14 yards offense and two first downs to take a 20-17 lead. Their first TD drive did not distinguish the Browns’ defense well. Despite a successful Browns challenge that wiped out a 14-yard gain, Haskins took his team 49 yards in six plays for a touchdown. A 26-yard gain by back J.D. McKissic on a crossing route exposed the Browns’ middle defense. Then inside the 5, they had confusion, first lining up 12 men and then uncertain about their player count on a 2-yard scoring run by Antonio Gibson. On the second scoring drive, the Browns’ defense simply took the possession off. Haskins missed a wide open Terry McLaurin beating Andrew Sendejo to the left corner, fumbled a handoff exchange and then flipped to Dontrell Inman beating Terrance Mitchell for an 11-yard TD and the lead.

5. Game changer?: Early on, Washington’s elite defensive line was getting the better of the Browns’ offense line. Browns left tackle Jedrick Wills had two false starts on the first two offensive series. Then Washington franchise end Chase Young left the game with a groin injury early in the second quarter, and everything changed. Chubb started running through creases and breaking tackles in the secondary, and Mayfield had a second or two more to see the field. The Browns scored two touchdowns after Young left the game.

6. Turnover machine: Both touchdowns came after interceptions by Dwayne Haskins. On the first, he was high for tight end Logan Thomas and safety Karl Joseph picked it. Joseph fumbled 49 yards to set up a 28-yard field for the Browns and Chubb’s 16-yard touchdown run. On the second, Haskins never saw linebacker Malcolm Smith, who stepped in front of Dontrell Inman for an easy steal just after the two -minute warning. From the Washington 24, Chubb ran for 11 yards and 4, and then Mayfield looked right at Kareem Hunt out of empty formation and tossed an easy 9-yard TD. Linebacker Kevin Pierre-Louis and cornerback Ron Darby couldn’t tackle Hunt at the 2.

7. Big hit, part one: Joseph came to the Browns with the reputation of being a violent hitter. He lived up to that when he decleated Antonio Gandy-Golden after a 22-yard run on a jet sweep. Swatted him down like a gnat.

8. Big hit, part two: On the very next play, Haskins’ first pass of more than 10 yards appeared to have been intercepted by Denzel Ward. But intended receiver Isaiah Wright knocked the ball out with an alert big hit of Ward.

9. Don’t do this, kids: Touchdown catches will be rare for the Washington Football Team, so you might excuse Dontrell Inman for celebrating his in the first quarter. But when he flexed both arms in the face of safety Andrew Sendejo in the end zone, Inman drew a penalty for taunting.

10. Pre-game notes: After meticulous observation from trainers, Stefanski and GM Andrew Berry in pre-game warm-ups, CB Denzel Ward (groin) was made active and started in his usual spot. DE Adrian Clayborn (hip) was active and started in place of Olivier Vernon (abdomen). LB Mack Wilson (knee) was active for the first time, but Malcolm Smith started ahead of him. One curious note: WR Rashard Higgins was a healthy scratch. So, with WR Donovan Peoples-Jones also inactive, the Browns made only four receivers active, and one was return specialist JoJo Natson. After Natson left the game with a knee injury in the first half, the Browns played the second half with only three active receivers.