Browns Waiting To Sort Out Safety Situation For Pittsburgh Game 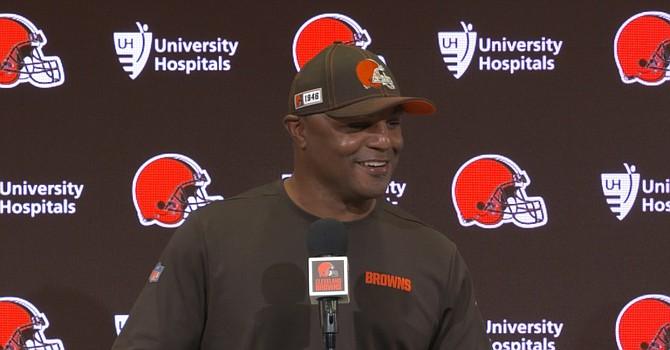 While the Browns’ Big Three on offense remained on the injury list – quarterback Baker Mayfield, and receivers Odell Beckham Jr. and Jarvis Landry -- the situation at safety may be more severe.

Mayfield was limited for a second day with sore ribs but was “trending in the right direction,” according to offensive coordinator Alex Van Pelt.

Beckham reported to work feeling ill and was sent home as a precaution. He did not test positive for Covid-19, coach Kevin Stefanski said.

Landry did not practice a second day in a row after taking a strong hit to his right side on his first catch early in the Colts game – his 101st consecutive NFL game. He has never missed a game and doesn’t intend to miss the Pittsburgh game.

Friday will be a big practice day for those three and also for safeties Karl Joseph and Ronnie Harrison. Joseph (hamstring) missed the Colts game and two practices this week. Harrison (concussion protocol) has not practiced after turning in a Pick 6 against the Colts in his most extended playing time as a Brown.

That leaves the Browns with healthy safeties Andrew Sendejo, Sheldrick Redwine and Jovante Moffatt against a Steelers’ offense that stresses secondaries with four lethal receivers and two tight ends.

“We are good,” said always-positive defensive coordinator Joe Woods. "Coach [Jeff] Howard [pass game coordinator/defensive backs] has done a good job throughout training camp just always rotating all the guys we have in the back end. The guys are all familiar with the defense. We have the ability to move pieces around.

“With Ronnie, it is really day by day with him, but I think we may get him back. We will see. Regardless, we will have guys that will be ready to step up and play.”

Joseph and Harrison are natural strong safeties. If they both are unavailable, Woods will have to decide how to position Sendejo and Redwine. Both are natural free safeties.

The Browns-Steelers rivalry always has been stoked by intertwining relationships rooted in Cleveland and Pittsburgh.

Start with Cleveland-native Chuck Noll, the former Browns messenger guard under Paul Brown. He rescued the Pittsburgh franchise from 40 years of losing as coach in 1969 and created the Steelers’ Super Bowl dynasty in the 1970s.

Pittsburgh sent the Browns coach Marty Schottenheimer, who presided over a Browns renaissance in the 1980s. Schottenheimer’s successor, Bud Carson was a Pittsburgh-area native and Noll assistant.

Cleveland sent the Steelers another Super Bowl coach in the 1990s, Bill Cowher, who was a Pittsburgh-area native but played for the Browns and was mentored as a coach in Cleveland by Schottenheimer.

That’s where they met Stefanski, who was starting as Brad Childress’ entry-level chief of staff.

“Mike was my mentor,” Woods said in an interview in 2018. “He taught me how to see the game differently, how to prepare and how to handle a room. He’s just a dynamic personality. I owe a lot to him, really, for me being in the position I’m in. We remain friends. When I go home and go back to Pennsylvania, I stay with him for a couple days. I just look up to him.”

As for growing up a Steelers fan, Woods said at his introduction as Browns coordinator in February, “It is the truth. It is what it is. I work for the Browns, and that is what it is.”

After some improvement, the 101-yard kickoff return for a touchdown by the Colts secured the Browns’ last-place standing in kickoff coverage and instigated a lineup shuffle. The Browns were No. 1 in the category last year. “We are going to find the right match of guys,” said special teams coordinator Mike Priefer. “There are some things we are doing or personnel we are putting out there that are not good enough, and we are going to make those changes.” …

Because Mayfield has been limited with sore ribs, veteran backup Case Keenum has taken the brunt of work with the first-team offense. Keenum was 11-3 with a 98.3 passer rating as Vikings starting quarterback in relief of injured Sam Bradford in 2017, but went 7-17 the last two seasons with Denver and Washington. Keenum was one of the Browns’ three big free agent signings ($18 million/three years, with $10 million guaranteed) after GM Andrew Berry and Stefanski took over football operations from John Dorsey. “Case has been a backup in this league for a very long time and he has been a starter. He understands how to prepare, if need be,” Stefanski said.