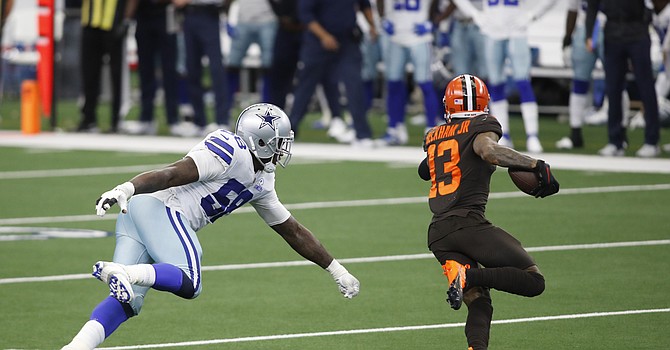 If Nick Chubb and Kareem Hunt are the heart and soul of the Browns, then Jarvis Landry and Odell Beckham Jr. are the team’s spirit.

You want to gauge the mood of the Browns? You check in with Landry and Beckham.

At 3-1, and coming off a triumphant engagement on the grand stage of the Cowboys’ AT&T Stadium -- in which Landry threw a touchdown pass to Beckham and had five receptions for first downs in his milestone 100th career game, and Beckham added two additional scores, including the near walk-off 50-yard highlight run on a reverse -- the mood is very good.

“Yeah, the 100th game was an emotional thing for me, and then to cap it off throwing a touchdown rather than scoring a touchdown was almost perfect,” Landry said, adding that his left lat muscle was sore for two days after left-handing the 37-yard TD strike to Beckham.

Make no mistake, much of Landry’s joy was in seeing Beckham put on a show with 154 yards from scrimmage and three touchdowns. It was Beckham’s signature game, so far, in a Browns uniform.

“You find a way to get the ball in Odell’s hand. [What] should have been a 12-yard loss turns into a 50-yard touchdown in the opposite way in a blink of an eye. Listen, I have not seen plays like that in the NFL in a long time. Only special guys make those type of plays. He is very special. That is something that we are going to continue to need out of him for the rest of the season.”

Landry said he had not seen Beckham so content since their days at LSU. Beckham agreed.

“It is just a different day and age now, and I think that this is probably one of the best spots I have been in,” Beckham said.

Beckham played all of last season with a core muscle injury and then had sports hernia surgery after the season. His health is a big reason he is happy. Getting the ball and contributing to a 3-1 record is another.

“I am definitely stronger, faster this year than I was last year. I am just all around healthier,” he said.

“When he is in space and has the ball in his hands, defenses have a hard time getting him on the ground,” said coach Kevin Stefanski, “because he is just uniquely gifted in that way. That is where it is our job to make sure we are getting him the ball in space.”

Stefanski’s concerted effort to keep Beckham and Landry involved in the run-oriented offense, particularly in Texas, is a big reason why the mood of the team is good.

Landry cited Stefanski’s “double dip” – the field-goal drive to end the first half and the touchdown drive to open the second half – as a turning point in the evolution of the team.

He said after the Browns moved 71 yards in the final 3:53 of the first half to kick a field goal and extend their lead over the Cowboys to 31-14, he told Baker Mayfield it was a step in the right direction.

“I can remember being here for the last two years, and we would do all of these things and then we would miss the kick or something would happen right before we get into field goal range or a penalty would happen or something happened that kind of stops us,” Landry said.

“We had the sequence of plays and then we kick the field goal, and I felt the step being taken as a football team – I am getting chills right now – to be able to be where we want to be because that is what we have to do. We have be able to score those points right before half and then come out and score at half and score. That is a 10-point swing right there. That is a beautiful thing in this game.”"

Even Stefanski sounded excited about that field-goal drive at the end of the half.

“That was our first two-minute drive of the season. It took three games to get into a two-minute. We have worked hard at it,” he said.

The main task of the third receiver in Stefanski’s offense is to block, which is why rookie receiver Donovan Peoples-Jones (6-2 and 212 pounds) – and not surer pass catcher Rashard Higgins -- seems destined to get the most reps there after KhaDarel Hodge was put on injured reserve with a hamstring injury. “He got somebody on the ground on that very first play. He is plenty big and plenty strong so that has to be a part of his game,” Stefanski said of DPJ …

Linebacker Mack Wilson’s play time increased from six snaps in his first game back from his knee injury to 27. He got time only in the base defense and was credited with one tackle. So he’s still knocking off rust from his six-week knee injury. “At some point in this year, we are going to need everybody to step up and play maybe a bigger role than they have right now. As it pertains to Mack, we expect his role to continue to grow,” Stefanski said …

Despite external criticism, defensive coordinator Joe Woods and Stefanski expressed faith in free safety Andrew Sendejo. Woods exonerated Sendejo on the 43-yard touchdown catch by the Cowboys’ CeeDee Lamb, calling it a blown coverage by another player. “He has really been an asset for us because he gets everybody lined up in the back end, he communicates, his work ethic around the building and his film study,” Woods said. “His biggest thing is just continuing to work on being consistent and not trying to do too much.” …

The Browns injury report included 17 players. The only ones who did not practice were tackle Larry Ogunjobi (abdomen) and linebacker Tae Davis (elbow). Running back Kareem Hunt (groin) was limited.