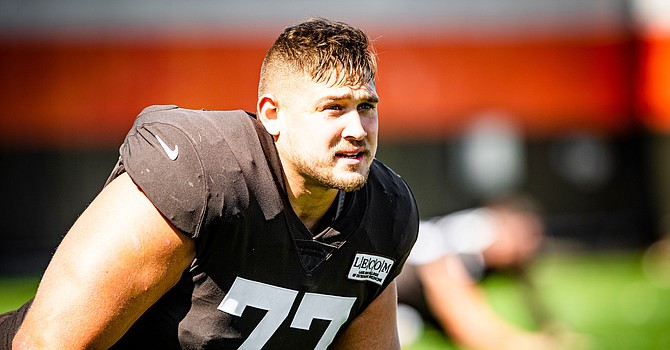 Right guard Wyatt Teller has been an integral part of a Browns offense on pace to obliterate the franchise scoring record. (Cleveland Browns)

Let that sink in for a moment.

Here are Browns point totals through their first four games in the previous five seasons:

So they are scoring 50.1 percent more points through their first four games than their average (82.6) over the previous five seasons. And they’re doing it without points from defense or special teams – no Pick 6’s or return TDs.

Besides better talent and coaching, the biggest reasons for the scoring outburst are capitalizing on scoring off defensive turnovers and supreme efficiency in the red zone.

The Browns have scored a league-high 45 points off their 10 defensive takeaways (also a league-high). The Browns have been so aggressive after getting the ball back, it’s almost as if coach Kevin Stefanski has a different play sheet for possessions after turnovers.

“No,” Stefanski said, “We are just trying to be aggressive. We have scored touchdowns with those turnovers and that is a huge deal. I think our players have fed off of that. I know the offense feeds off when the ball gets turned over. They are excited to get back on the field. We are just sticking with our offense in those situations.”

As for efficiency in the red zone, the Browns have 12 touchdowns in 15 trips inside opponents’ 20-yard line. That 80 percent TD efficiency is tied with Tampa Bay for second. Seattle leads with 13 TDs in 15 trips (.867).

Hunt denied that he had to shut it down when his groin injury acted up.

“I am feeling good,” he said. “I will be ready to go Sunday. There was not really a moment that I had to shut it down.”

Hunt was listed as “limited” at practice on Wednesday with the groin injury.

“I am willing to do whatever it takes to help the team win,” Hunt said. “If that means getting more carries, then I am fine with that, too.

“I believe I can take on the workload, but honestly, it is not bad because I trust in those other guys, too, Dontrell [Hilliard] and D’Ernest Johnson. If I ever need a break, I know they will come in and do a great job.”

Right guard Wyatt Teller is getting a lot of accolades from national sites, some of which are touting him as an All-Pro candidate.

Teller was acquired from the Buffalo Bills in late August of 2019 for fifth- and sixth-round draft picks. He didn’t crack the lineup until Game 7. By the end of his nine straight starts, he had solidified the right guard spot.

When new line coach Bill Callahan declared the position wide open in the offseason, Teller never wavered in his belief the job would be his.

“I knew that it would be beneficial for the whole team to have a competition and not a ‘He is our guy. An unproven guy, he is our guy.’ I kind of understood that I knew that I had to take lots of steps, but in my mind, it was mine, it was job, I wanted it and I was going to do whatever it took to get it.

“That is why I worked so hard. I put on the weight and I gained strength. I still have to get in shape (laughter) because we cannot run as much and it is a little different when you are not playing ball, but it is the only thing that really gets you into shape is ball. It was good, and I felt like preparation was big this year.”

Tight end David Njoku was returned from injured reserve after suffering a knee injury in Game 1 in Baltimore. “I am completely healed so I am really excited to finally get back on the field, hang with my teammates and have some fun. I am very excited,” Njoku said …

Starting defensive tackles Larry Ogunjobi (abdomen) and Sheldon Richardson (thigh) did not practice. Stefanski wouldn’t elaborate on their availability for the Colts game and said they were “day to day.” …

Baker Mayfield, on Stefanski’s performance as a play-caller: “A smooth operator. Right now, we are continuing to call things that are working until teams show us otherwise that they can stop it. We are going to do that and then we are going to take our shots when we can. We are going to pound the rock and try and create matchups on the outside and take advantage of that.”