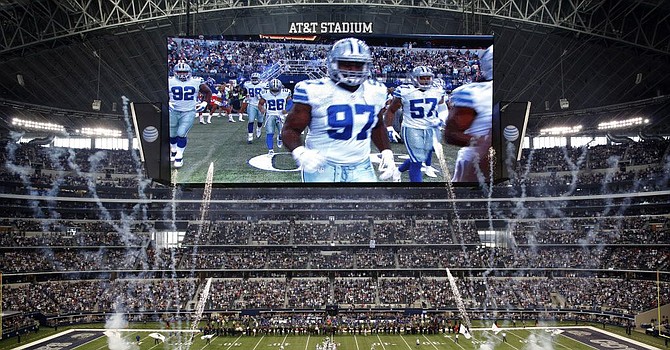 Many Browns will be making a homecoming when they play the Cowboys in AT&T Stadium, aka Jerry's World. (Dallas Morning News)

Because of the NFL scheduling formula, the Browns play the Cowboys in Texas about once every eight years. So Sunday’s trip to AT&T Stadium is a big deal to several players on the roster.

AT&T Stadium opened in 2009. Known as Jerry’s World, the retractable roof stadium cost $1.3 billion to build. When opened, it boasted the largest HDTV video screen in the world, which hangs over about 60 yards of the field and is impossible to ignore.

The roughly 80,000 seats will be about 25 percent filled, making it probably the largest crowd the Browns will play in front of this pandemic season.

For Myles Garrett, it’s his first game in his pro career in his hometown of Arlington, TX.

“I know he is excited,” said tackle Larry Ogunobi. “He is excited for every game. I would not say it is different, but I just know how it feels to be playing in front of your hometown and you want to show out. I know he has that excitement.”

“I think those guys understand it is a business trip,” said coach Kevin Stefanski. “Honestly, with the protocols as they are you, you can’t see friends and family anyway. You see a lot of the hotel."

Mayfield won the 2011 Texas high school football championship in the stadium and also the 2017 Big 12 Championship for Oklahoma there.

“It's always fun to play there,” Mayfield said. “I'll have a lot of friends and family there. I've got to treat it like any other game. We've got to go do our job. Growing up and seeing the high school state championships there and playing there a couple times in college, it's a great stadium.”

For Odell Beckham Jr., it’s a reminder of the iconic catch that made him an instant highlight reel as a rookie.

The one-handed grab while tumbling into the end zone actually occurred in the Giants’ MetLife Stadium on Nov. 23, 2014. But since it came against the Cowboys, it was frequently relived when Beckham’s old team played the Cowboys two times a year.

With the Giants, Beckham never approached that Sunday Night Football game performance, in which he caught 10 of 11 targets for 146 yards and two touchdowns.

In four games in AT&T Stadium in his career, Beckham averaged six catches for 50 yards. He had two touchdowns in his first game there in 2014, but hasn’t scored since.

He loves the place.

“Absolutely, it is amazing,” Beckham said. “I have not seen the new L.A. stadium, and I have seen the new Atlanta stadium. This is just one of those ones where I feel like those stadiums kind of took a little bit of that atmosphere. It is just an incredible environment, a beautiful place. Always excited to be able to play there.”

Jarvis Landry played there as a freshman at LSU and twice in preseason. He said he is excited about playing there for the first time in a regular-season game.

“You watch those games, it is always like the mecca of games,” Landry said. “It is always that Jerry Jones and the Texas atmosphere, the jumbotron being one of the biggest that has been put in a stadium. For me personally, it is a great opportunity in a prestigious stadium to go out there and make plays and bring back a W – my first regular season victory there, too.”

Landry said he’s still not 100 percent recovered from his hip surgery in February. “I still have a couple more weeks at trying to get to where I need to be,” Landry said …

The Cowboys really stress a defense’s depth at cornerback by fielding a three-receiver set of Amari Cooper, Michael Gallup and CeeDee Lamb most of the time. Against Seattle, No. 4 Cedric Smith added a touchdown, too. With Denzel Ward (groin) and Greedy Williams (shoulder) getting limited time at practice on Thursday, D-coordinator Joe Woods has to come up with something to cover those guys. “I think if we can get him out there the next two days and he moves around pretty well, that will bode well for us,” Woods said. “If he is not available, it is just next man up. That is all you can really say because you can’t protect everybody. You just have to go in with a good scheme and put guys in the best position you feel they can have success.” …

Kareem Hunt (groin) was held out a second day in a row, making his game status uncertain. The Browns would like to give Nick Chubb some breathers, so it’s possible D’Ernest Johnson and Dontrell Hilliard both could replace Hunt. “Obviously, we like to keep [Chubb] fresh as possible so D’Ernest and Dontrell will get their opportunities, as well, as if Kareem can’t go. They are definitely capable understudies, so to speak, and they are ready to roll, as well.”