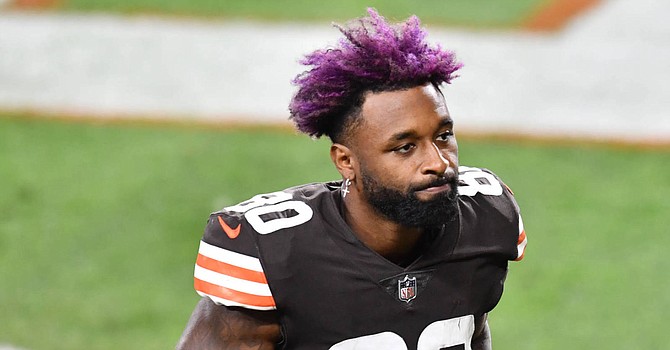 A lot of people won’t remember 2020 fondly, Jarvis Landry among them.

Still recovering from February hip surgery, he broke a rib in the Colts’ game and then took hits to the injured area in three successive games.

He’s on pace for career lows in targets and receptions.

He leads the Browns with five dropped passes.

He has yet to score a touchdown.

The bye week, Landry said on Thursday, “was much needed, not only for my body but for my mind and my spirits, as well.”

Landry can’t even call on best friend Odell Beckham Jr. to lift him up. On the contrary, Beckham’s out for the year, mending a torn ACL in his left knee.

“You can’t put it into words,” Landry said of the disappointment. “I don’t really even know how to say anything because you hate to see somebody that works as hard as he works to go down the way that he went down. Now, he is kind of on this journey again. Like I said, I think the best thing that any of us can do right now is just continue to support him, continue to give him positive messages and continue to be there for him throughout this process.”

Landry has dedicated the remainder of the season to Beckham.

“We all loved the leader that he was, the player that he is and the way that he made plays to help us win these football games because, honestly, we could not have really done that without him,” Landry said. “For us, we have to just continue to play for each other and play for him. He is a part of this. He is a part of this so that is definitely added motivation for sure.”

Landry’s eight-game scoreless streak is the longest in-season drought of his seven-year career. He went 10 games without a touchdown over the last five games of the 2014 season and first five of 2015.

Nobody is saying yet whether Nick Chubb will, in fact, make his first game action Sunday against the Houston Texans since suffering a sprained MCL in his right knee Oct. 4 against Dallas.

But it was a positive sign that Chubb shed the knee brace at practice on Wednesday. The Browns have not yet activated Chubb to the regular roster, so they haven’t characterized his game status. That should come on Friday.

“I would say I am hopeful,” coach Kevin Stefanski said. “But I want to let this week play out. Like we talked about, get to Friday and make a determination. How he feels and how he checks in with the trainers will be the determining factor.”

Said offensive coordinator Alex Van Pelt, “The key is to get him as healthy as possible for that second half of the season push. Winter football is coming. We are going to have to rely on the run game a fair amount. To have him healthy and full of energy there for the second half is important. He did look good [Wednesday]. Excited to get him back in the mix, hopefully this week.”

The last word on Chubb comes from guard Joel Bitonio.

“When you see Nick in the huddle smiling and just ready to play football again, it makes you happy,” he said.

Earlier in the week, linebacker Mack Wilson said he finally feels 100 percent recovered from the hyperextended knee injury he suffered in August. Linebacker B.J. Goodson had an interesting take on Wilson’s progress. “Mack is moving beautifully, to me,” Goodson said …

Neither Stefanski nor coordinator Joe Woods would say if lineup changes are possible after the self-evaluation done in the bye week. “We are tweaking it every week, just based on what is going on,” Woods hedged. “We are playing multiple people at multiple positions. We will continue to evaluate that each week.” …

It turned out that Cody Parkey may not have given opposing kicker Daniel Carlson advice about taming the winds inside FirstEnergy Stadium prior to the Raiders game. It was a story reported on the network coverage of the game. “We were going to tell him some false stories about the wind and kind of mess with him a bit,” special teams coordinator Mike Priefer said. “He did not give him anything that I think helped him. Maybe it did in Daniel’s mind that he got something out of that, but there was no intent there. In fact, it was the exact opposite.”