Myles Garrett Out After Testing Positive For Covid-19 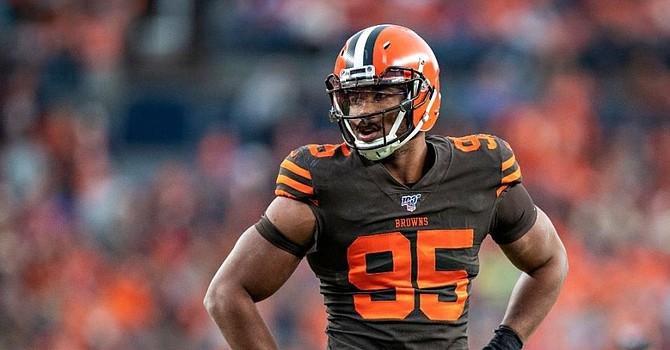 The NFL's leading pass rusher has been sacked by Covid-19. (YahooNews)

Covid-19 has landed its biggest hit yet on the Browns.

It felled NFL-leading sacker Myles Garrett for Sunday’s game against the Philadelphia Eagles, and maybe longer.

The Browns announced Friday morning that Garrett was placed on the Covid-19 reserve list.

Technically, teams can’t say whether a player has tested positive or simply was exposed to someone who has.

But in this case, Garrett was sent home prior to Wednesday’s practice with flu-like symptoms as a precaution. Garrett also was absent on Thursday, at which time coach Kevin Stefanski said, “Myles is scheduled to come back tomorrow … we will see.”

What the Browns saw on Friday morning was a positive test for Garrett. They announced a player tested positive without identifying Garrett by name.

Garrett, thus, will miss his first game of the season, Sunday against the Eagles, whose quarterback Carson Wentz leads the NFL with 35 sacks and 12 interceptions.

Garrett leads the NFL with 9.5 sacks and four forced fumbles. He has made a game-changing play in each of the Browns' six wins.

In Philadelphia, Eagles coach Doug Pederson said, “He's definitely in the discussion for defensive player of the year ... It's a blow.”

The Eagles (3-5-1) hold a 1 ½ game lead in the laughably weak NFC East division. The Browns (6-3) are locked in a six-way tie for three AFC wild card spots but currently would be ousted out of the field via tie-breakers.

Players who test positive and experience symptoms may not return for 10 days minimum and repeated negative tests, in addition to needing a green light from the team’s medical director. So it’s possible that Garrett could also miss the Browns’ next game, Nov. 29, in Jacksonville.

They were hoping to get Conklin and Parkey back in time for Sunday's game.

But as Stefanski has said, "We will see."

Stefanski will address media after practice ends at 12:30 p.m. today.